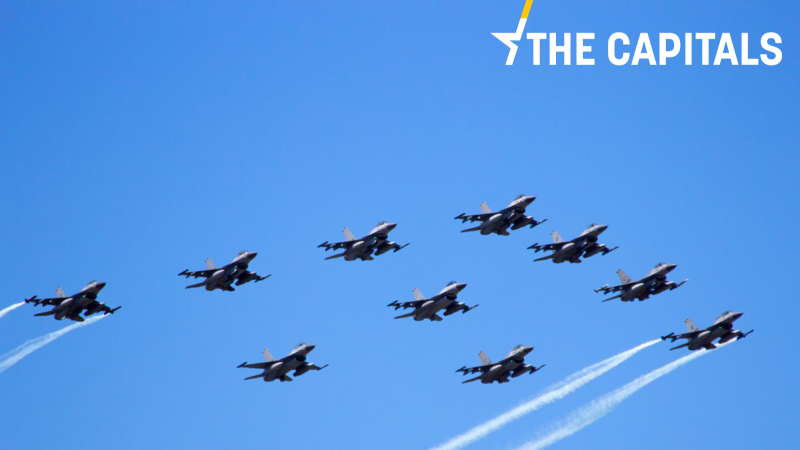 So far, only nine NATO members have met the 2% target in 2019, according to data from the military organization. [Shutterstock/VanderWolf Images]

Before you start reading today’s edition of the Capitals, feel free to have a look at the article “Russia revamps its nuclear policy amid simmering tensions with NATO“.

Now that many European countries have started lifting lockdown measures and opening borders, make sure you stay up to date with EURACTIV’s comprehensive overview, which is regularly updated with the help of our network of offices and media partners. Also, check our country update pages, such as the ones for Austria and Croatia.

The Dutch government is unlikely to fulfill its NATO defence spending obligations within the next four years. The news comes after parliamentarians called Dutch defence minister Ank Bijleveld in for questioning on the so-called ‘recalibration’ of the defence memorandum. Alexandra Brzozowski has the story.

Travel restrictions will be eased, meanwhile. From 15 June, the Netherlands is set to relax its advice on travel to most European countries in the Schengen area. The scale will go from code orange (only necessary journeys) to code yellow (security risks). The Dutch government is set to announce more details later on Wednesday.

US Ambassador resigns. After weeks of speculation, US Ambassador to Germany, Richard Grenell, has formally resigned from his position. During his two-year tenure in Berlin, he had been the subject of ire for many in the country for his approach, described as “unconventional” and “undiplomatic.” He particularly focused on German defence spending and NATO commitments, and recently accused the country of “eroding NATO solidarity.” There is speculation that Grenell will join President Trump’s 2020 reelection campaign.  (Sarah Lawton | EURACTIV.de)

Forbidden demonstration against discrimination. Thousands of demonstrators gathered on Tuesday evening (2 June) in front of the Paris courthouse following a call for mobilisation by the Justice for Adama collective, and despite the protest being banned due to the COVID-19 health crisis.

24-year-old Adama Traoré was found dead in the gendarmerie’s courtyard in Beaumont-sur-Oise following his arrest in July 2016. While the conclusions of the latest medical report, sent at the end of May to the judges investigating the case, exonerate the police, Traoré’s family questioned the violent methods of the gendarmes. The movement reflects a distrust of the police, particularly in the Parisian suburbs, where there are many incidents and complaints of discrimination, and as American cities flare up after the death of George Floyd in Minneapolis. (EURACTIV.FR)

Last deconfinement phase under discussion. Belgium’s National Security Council is set to discuss the implementation of Phase 3 of the deconfinement process, which could start from next Monday (8 June). Alexandra Brzozowski has the details.

Parliament ends remote working. MPs faced the bizarre spectacle of queuing for over 40 minutes in socially-distanced lines outside the House of Commons to vote for an end to voting from home on Tuesday (2 June). Benjamin Fox reports from London.

Government finally promotes COVID-19 tracing app. Austria’s COVID-19 tracing app known as “Stop-Corona” developed by the Austrian Red Cross was again endorsed by the government  – after being one of the first of its kind in Europe – on Tuesday (2 June).  However, during a press conference, Health Minister Rudolf Anschober (Greens) said “discussions about mandatory use are off the table”, but nevertheless emphasised the app’s importance for opening up the country further.

Although the app had got off to a good start, an increasing number of people began to have concerns about their privacy, particularly after conservative ÖVP-politicians showed support for the app’s mandatory use in early April. Since then, the app has vanished from the government’s official information and Gerry Foitik, federal commander of the Austrian Red Cross, has repeatedly voiced frustration with the political communication surrounding the app. (Philipp Grüll | EURACTIV.de)

Refugee camp returnees open political trenches. Three Finnish women and their nine children landed in Helsinki after escaping from the Syrian al-Hol refugee camp, according to a statement by Finland’s foreign affairs ministry on Sunday evening (31 May). Although these women were presumed to be married to ISIS fighters and may pose a future security risk according to the Finnish Intelligence and Security Service (SUPO), they could not, as Finnish citizens, be legally denied entry into the country. Pekka Vänttinen has more.

Opposition protests on Republic Day. Hundreds of protesters took to the streets of Rome in an anti-government protest organised by the right-wing Lega, the far-right Fratelli d’Italia and the centre-right Forza Italia on Republic Day yesterday (2 June), for the first time since Italians celebrated the birth of the Italian Republic in 1946. Protesters defied social distancing rules marching next to each other. EURACTIV Italy’s Valentina Iorio has more.

Zero coronavirus-related deaths since Sunday. On Tuesday (2 June), Spain reported zero COVID-19-related deaths in the last 48 hours for the first time since March, as well as 71 new coronavirus infections, according to the health ministry’s reports. In other words, it has been two consecutive days since the new infection rate has been below 100 for the first time since the outbreak. EURACTIV’s partner EuroEFE reports.

US, EU condemn Turkey but sanctions off the table for now. Both Washington and Brussels condemned Tuesday (2 June) Turkey’s announcement that in three months it will start gas drilling activities in territories which are part of Greece’s Exclusive Economic Zone.

EU spokesperson Peter Stano said that while sanctions were still on the table, it was “premature” to have such a discussion now. Meanwhile, Enlargement Commissioner Olivér Várhelyi has confirmed that Ankara will join the club of EU-hopeful countries that will receive EU funds under the Instrument for Pre-accession Assistance (IPA). Why does Europe hesitate?

Getting ahead of the Trianon centenary. “Trianon cannot become a burden that would prevent Slovaks and Hungarians to look to the future,” Slovak Foreign Minister Ivan Korčok said during his visit to Budapest, where he met his Hungarian counterpart, Foreign Minister Péter Szijjártó, according to the TASR agency.

The approaching centenary of the Trianon Peace Treaty (June 4) from 1920 through which Hungary lost substantial territories after the WWI, including those that now form Slovakia is a sensitive issue on both sides of the border. EURACTIV Slovakia’s Zuzana Gabrižová looks into what the two ministers had to say.

‘Anti-Bulgarian’ election campaign in Skopje under fire. The anti-Bulgarian campaign in Northern Macedonia in recent days is due to the upcoming elections there, Foreign Minister Ekaterina Zaharieva has said.

“Part of the reason for the anti-Bulgarian speech in Macedonia is the nationalist approach, which they think still works during elections. But when you aspire to be part of the European family, it should not occur to any politician to say so. This rhetoric, aimed at a neighbouring and friendly country, is full of fake news and hate speech,” Zaharieva told national television (BNT). (Krassen Nikolov | EURACTIV.bg)

BUCHAREST
Dacia faces lack of orders. Renault reopened a few weeks ago its Dacia car factory in Romania after a shutdown due to the coronavirus epidemic, but is now sending some employees back home, because of insufficient orders. Bogdan Neagu has more.
A third wave of lifted restrictions. Romania plans to lift some more restrictions on June 15, health minister Nelu Tataru told the national television TVR. Read more.
///

Post-lockdown migrant pressure. The pressure of illegal migrants along the border between Bosnia and Herzegovina and Croatia in the northwestern Bosnian canton Una-Sana is rising as lockdown measures are being loosened, the local police authorities said on Tuesday (2 May). EURACTIV Croatia’s Karla Junicic takes a closer look.

In other news, a grant agreement for the Early Warning and Crisis Management System project worth HRK63 million (€8.3 million), of which 85% will be drawn from EU funds, was signed on Tuesday (2 June) by the country’s interior ministry.

The crisis management system should facilitate the process of informing citizens, via mobile phone, about threats and measures that must be taken to reduce casualties and material damage, according to Deputy Prime Minister and Interior Minister Davor Bozinovic and Environment and Energy Minister Tomislav Coric, who signed the agreement. (Karla Junicic, EURACTIV.hr)

Austria has already announced the reopening of borders with Germany, Hungary, Czech Republic and Slovakia, Delo has said, adding that there is no official announcement yet for Slovenia, while Austrian media say this is expected to happen on 15 June. EURACTIV’s Zoran Radosavljević looks into it.

Along with increasing EU guarantees up to €130 billion for investments in southern and eastern EU neighbours and the West Balkan region, he said that an additional €10.5 billion would be set aside through the EU Development Fund to support the neighbourhood. EURACTIV Serbia reports.

In other news, Serbia has only partially implemented two of recommendations of the Council of Europe’s Commission against Racism and Intolerance (ECRI), according to ECRI’s press release published Tuesday (2 June). The two recommendations are linked to prohibiting the use of hate speech by government officials and MPs and to hiring a proportionate number of Roma in the public administration. Read more.

US Ambassador to Serbia Anthony Godfrey has commented on the killing of George Floyd, an unarmed African-American man who died at the hands of a Minneapolis police officer. Read more.