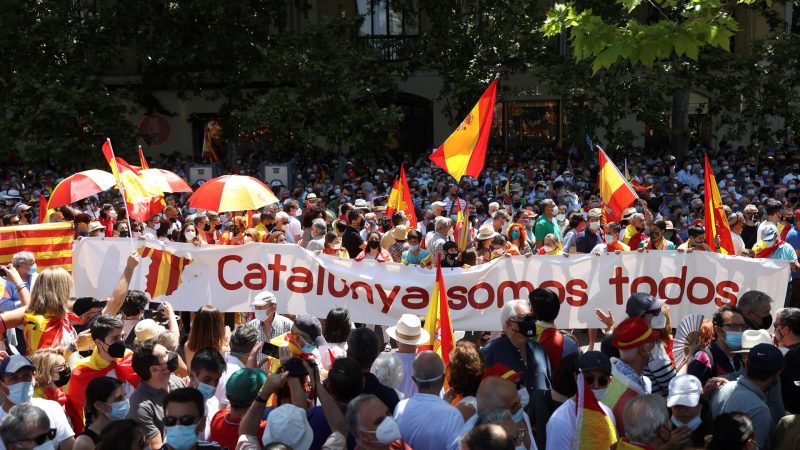 The government of the socialist Workers' Party (PSOE) and the left-wing Podemos is in favour of the pardons, despite dissent from within the coalition, the conservative opposition and the judiciary. [EFE/Rodrigo Jiménez]

Thousands of people gathered in Madrid on Sunday (13 June) to protest against pardons the Spanish government is poised to grant to 12 Catalan separatist leaders serving sentences of between 9 and 13 years in prison for their roles in an unauthorised independence referendum. EURACTIV’s partner EFE reported.

Police said 25,000 people attended the protest, which was attended by the heads of the conservative Popular Party (PP), far-right VOX party and the liberal Ciudadanos (Cs).

Prime Minister Pedro Sánchez’s indications that his government would pardon the pro-independence leaders of Catalonia, has divided Spain between those who see it as a necessary step to improve relations with the region and those who consider it an undue concession to separatists who have shown no remorse and have vowed to continue fighting for independence.

The government of the socialist Workers’ Party (PSOE) and the left-wing Podemos is in favour of the pardons, despite dissent from within the coalition, the conservative opposition and the judiciary.

This week, Sanchez said that while he understands the opposition to pardoning the Catalan independence leaders, he urged the country to trust his government and “to work on coexistence.”

“Spanish society needs to move from a bad past to a better future – and that will require magnanimity,” he said.

In an interview published Sunday by the newspaper La Vanguardia, Deputy Prime Minister Carmen Calvo said the pardons are imminent.

She also criticised the attitude of the conservative opposition and those attending the rally on Sunday, since the only viable way forward is to “normalise institutional relations, stop the tremendous confrontation caused by the independence movement and the Spanish right and stabilise the situation”.