‘Trains of hope’ from Ukraine 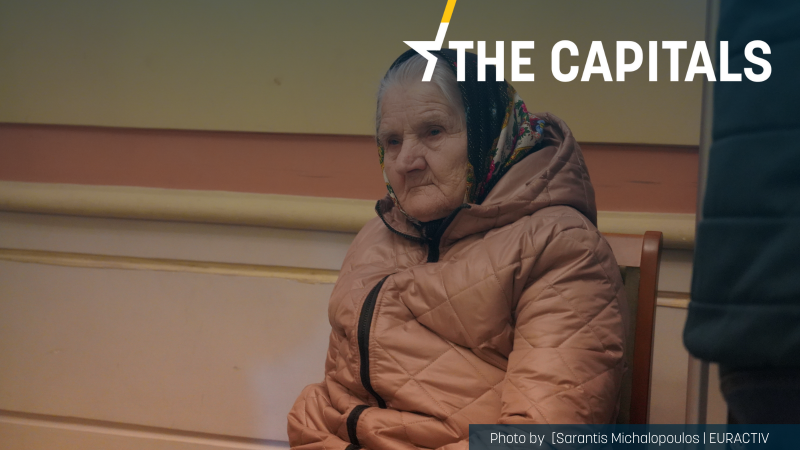 Before you start reading today’s edition of the Capitals, stay updated on all things related to Europe’s response to Russia’s war in Ukraine here.

Today’s edition is powered by Pulse of Europe.

It is no longer about what Europe can do for you, but what you can do for Europe. Get together with friends and shape Europe’s democracy. Start your own European HomeParliament.

Przemyśl has seen hundreds of refugees cross over since the war began here. For many of them, the train they take from Kyiv or Lviv is a train of hope to escape the horrors of war.

Most of those arriving are families or mothers with small children or babies while their fathers and brothers have stayed behind to fight. Many of them are grateful to have reached the border.

UNHCR estimates four million people may flee Ukraine in the coming weeks if the situation escalates. Roughly half of them are expected to come to Poland. Arriving here, they are greeted by a host of Polish and international aid workers, people offering transport, food, and accommodation around the country. Watch the reportage here.

Germany comes down on Putin-friendly ex-chancellor. Former German Chancellor Gerhard Schröder could face being stripped of privileges, titles and suspended by his party after refusing to end his business relations with Russian state-owned companies. Read more.

Macron formalises his presidential candidacy, finally. President Emmanuel Macron has officially announced his candidacy in the French elections due on 4 April to “invent with you [the French people], in the face of the challenges of the century, a unique French and European response”. Read more.

Austria burns another health minister, Mückstein steps down. The Austrian Health Minister Wolfgang Mückstein has announced his resignation less than a year after taking office, citing exhaustion due to managing the pandemic and death threats. Read more.

The move is a sign of the European unity that has emerged since Russia’s invasion of Ukraine began last week.

However, it is unclear whether the UK will propose any new sanctions against Russia.

In a statement on Thursday, Truss said that the UK wanted to “work with fellow freedom-loving democracies to tighten the vice around Putin’s war machine and signal our strong support for Ukraine’s territorial integrity.”

Former Russian oligarch warns of Russia’s intentions in Finnish TV interview. Mikhail Khodorkovsky, a former oligarch, jailed and later released by Russian President Vladimir Putin and now living in London in exile, delivered a stark warning about Russia’s intentions in an interview with the MTV3 channel on Wednesday. Read more.

Italy ready for refugee emergency, says interior minister. Italy is prepared to do its best to take in refugees fleeing the war in Ukraine, said Interior Minister Luciana Lamorgese during a meeting of EU justice and home affairs ministers on Thursday. Read more.

Spanish defence minister: We can’t turn a blind eye to war. Defence Minister Margarita Robles on Thursday justified the government’s change of heart on sending lethal weapons to Ukraine because neither Spain nor the EU “can turn a blind eye” to the conflict. Read more.

Hungary stands by Russian ‘spy bank’. Hungary would prefer to continue to be part of the Russia-led International Investment Bank (IIB) but said on Thursday it is yet unclear whether it will be financially able to do so. Read more.

Number of passport requests hits record as Slovaks fear the worst. More than 10,000 Slovaks issued a request for a new passport on Wednesday, which is an all-time record, police informed on Facebook, while telling people not to panic. Read more.

Romania to set up civil protection hub for Ukraine. Romania will host an international hub for humanitarian aid, which will collect and transport all donations for Ukraine. Read more.

Croatian parliament to examine government’s euro launch bill. The government has sent parliament a bill on introducing the euro as legal tender in Croatia, which includes the basic principles of introducing the common currency, possibilities of exchanging kuna for euros and the period during which both currencies will still be in use. Read more.

Croatia set to send up to 70 troops to NATO battlegroups in Hungary. The Croatian government has sent its decisions to deploy troops outside the country, including in Hungary as part of NATO’s presence, to parliament. Read more.

Idea for LNG terminal in Slovenia meets major pushback. The idea that Slovenia should diversify its energy supplies by a regasification terminal for liquefied natural gas (LNG) on the coast, pushed by senior officials like Prime Minister Janez Janša, has been met with stiff resistance from local communities and environmentalists. Read more.

Dodik attempts to block UN vote with Russian help. The Serb member of Bosnia and Herzegovina’s Presidency, Milorad Dodik, in cahoots with Russian diplomats, tried to prevent BiH’s ambassador to the UN from voting in favour of a General Assembly resolution condemning Russia’s aggression against Ukraine. Read more.

Kosovo parliament passes resolution on Ukraine, will accept 5000 refugees. The parliament of Kosovo has approved a resolution condemning Russia’s invasion of Ukraine and expressing its willingness to host 5,000 Ukrainian refugees. Read more.

PM: Albania far from war, Serbia has united Western Balkans with the west. Prime Minister Edi Rama has called for calm over the situation in Ukraine, reassuring Albanians that we are far from war or conflict. Read more.