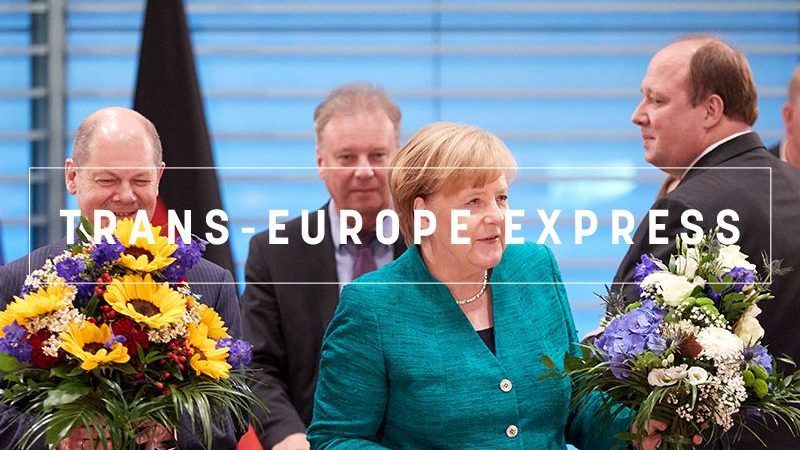 Trans-Europe Express is EURACTIV's weekly roundup from across the continent. [EPA-EFE/HAYOUNG JEON]

Germany’s grand coalition, or GroKo as it has been dubbed, had little cause to celebrate its 100 days in office on 21 June. Instead, it came under sharp criticism from all sides.

Industries, trade unions, opposition parties, municipalities, all of them accuse the ruling CDU/CSU and SPD of taking no action, setting false priorities and imposing a self-blockade on the asylum policy.

To understand the critics – and the underlying irony of the current political situation in Germany right now – one needs to do a bit of time travelling.

On 14 March 2018, while signing the coalition agreement in Berlin, the leaders of the CDU, CSU and SPD stressed they had already lost a lot of time due to the longest period of government formation ever in Germany – exactly 171 days after the elections were held on 24 September 2017.

They said they wanted to act fast to implement the reforms Germany needed.

Now that the euro crisis is over, it is time to bring the EU forward, Merkel said at the time, referring to the completion of the Banking and Capital Markets Union, the protection of the external borders and the design of a new form of development policy. To further develop the EU is “the most important national concern”, added Scholz.

Both Merkel and Scholz, as well as Interior minister and CSU leader Horst Seehofer, insisted the coalition will stay in power for the entire legislative period until 2021.

“We had the longest formation of a government ever in the country, chances are good we will get the shortest terms in office ever,” said Spiegel political correspondent Ralf Neukirch in a video analysis.

“The voters had no great expectations from the grand coalition. And yet they are disappointed. Everyone’s nerves are on edge – even the Chancellor’s,” he wrote.

“The German industrial sector expects the government to be and remain an anchor of stability for the EU. This applies both to the blazing trade conflict with the US, but also to the European migration policy and the urgently needed further development of the eurozone,» German weekly Stern quoted the President of the BDI Dieter Kempf as saying.

Reiner Hoffmann, chairman of the German Trade Union Confederation (DGB), urged the government to deliver on real issues, which affect people’s daily lives, stressing that their everyday life differs from that of the political Berlin.

“People have to deal with no affordable housing, the traffic infrastructure is grotesque, that the situation in our schools is sometimes catastrophic. These are issues that need to be tackled,” he said in the same publication.

He conceded that the Union-SPD coalition did make some progress on social issues but said it wasn’t enough.

Only SPD chairman Andrea Nahles was satisfied with the work of her party: “For 100 days now, the SPD has been implementing the coalition agreement step by step. Because for us it is mission and guideline,” she said.

And matters would be even more complicated if new elections were held next Sunday. According to the latest poll, the GroKo would no longer have a majority. The CDU and CSU together would get 30% of the vote, while the SPD would come in at 16% – and far-right AfD at 15.5%.

Myths and facts. Germany was a major beneficiary of Greece’s debt crisis and earned a total of €2.9 billion between 2010 and 2017.

Beyond headlines. The rise of anti-immigration rhetoric in Italy has further reinforced the perception of migrants as people struggling to integrate and embrace European values, however a closer look shows that integration is possible.

Warsaw worries. The EU-Poland spat over the rule of law is by no means over and the next few months could be absolutely crucial for Polish democracy.

Romanian winds of change. Romania’s former Commissioner and PM-hopeful Dacian Cioloș wants to convince people politics isn’t just about the mafia. The ruling party’s power-broker was sentenced to jail-time but it set to appeal.

Distinctive stench. The EU Court has condemned Germany for an excessive use of manure as fertiliser, which violates the limits set out in the EU’s nitrate directives.

Hit and miss. Most EU nations are set to miss their carbon reduction pledges made as part of the Paris Agreement, yet Brussels is already talking about upping the bloc’s overall commitment.

£65, no more. EU nationals wishing to remain in the UK will have to apply for permanent residency at £65 per person, according to a new scheme presented by the Home Secretary.

Turbulence ahead. Poland is about to face some rough months ahead as the fate of its democracy could be decided.

Overworked. The Commission’s communication on the environmental impact of pharmaceuticals might not be adopted in the near future because of other legislative initiatives on the agenda.

No more eels. According to a study, Europe’s river-dwelling creatures are threatened by traces of cocaine in some of the continent’s most well-known rivers.

What’s in a name. Greece and Macedonia signed an agreement to rename the small Balkan nation the Republic of North Macedonia. This could mark the end of a 27-year-long row.

Square the circle. Spain’s new government said it would not miss its deficit target despite a planned increase to pensioners’ benefits  being questioned by the EU institutions.