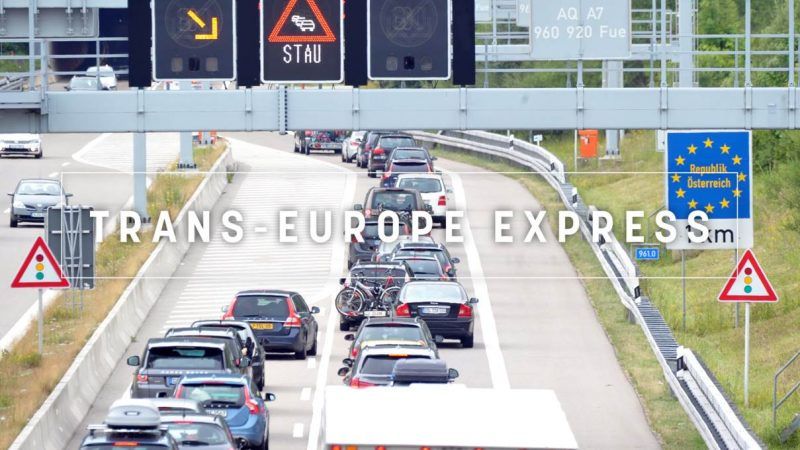 Trans-Europe Express is EURACTIV's weekly roundup from across Europe

All of you preparing to go to southern Europe by car this summer, good luck! Especially on your way back.

Chances are you’ll get to see a new Europe at work, somewhat different from the borderless area envisaged in the treaties.

Traffic jams in August are hardly news but take a look at this piece of advice posted by Germany’s respected automobile club, ADAC:

“Due to the refugee problem, Germany continues to control its borders with Austria. An end is currently not foreseeable. This also affects the tourist traffic. Above all, the motorways are affected, but in the course of a newly established Bavarian border police, the monitoring of federal, provincial and county roads should also be strengthened. The type and scope of the controls are based on the current requirements.”

It reads like a passage from a dystopian novel, in which surviving European tribes work hard to defend their women and children from marauding invaders.

But there is more from ADAC:

“Austria is currently monitoring its borders with Slovenia, Hungary and Slovakia. At the transitions, there may be waiting times. Only the entry into Austria is affected, there are generally no problems with the departure. As in Germany, the type and scope of the controls will also be adapted to the situation at short notice.”

Austria, the holder of the rotating EU presidency until January, is the new champion of border controls, spearheading efforts to suspend Schengen under the leadership of Interior Minister Herbert Kickl.

Kickl already wrote to the Commission to warn that the “situation is currently not sufficiently stable. For this reason, Austria has decided to carry out internal border controls on Slovenia and Hungary.”

To this end, Austria has set up a new border protection unit called PUMA and organised a border patrol exercise, with the aim to “strengthen the confidence of the people in Austria”.

“That’s why 500 policemen and 220 soldiers practice defending against an onslaught of people who illegally cross the border at the Spielfeld border crossing,” Kickl said in an official press release on 26 June.

Ironically, Spielfeld was the most popular border crossing in the 1980s for citizens of communist Yugoslavia, who crossed it en masse – and without problems – every weekend for a brief shopping spree in nearby Leibnitz or Graz.

Furthermore, in 1989, it was Austria that first dismantled borders with the eastern bloc.  On 27 June, 1989, Hungary’s Foreign Minister Gyula Horn and his Austrian counterpart, Alois Mock, held a symbolic fence-cutting ceremony at the Sopron (Hungary) border crossing.

In another ironic twist, local authorities in northeast Italy have stepped up border controls with Slovenia, particularly in Gorizia, a town that was split in two (Gorizia in Italy, Nova Gorica in Slovenia/Yugoslavia) when the east-west divide came up after World War II.

The irony is that on 1 May 2004, when Slovenia and nine other countries joined the EU, one of the main celebrations was held in the divided town, as the border came down and citizens from the two halves reunited for the first time in half a century.

Oh, and, just in case you decide to take the scenic route from Italy through the French Alps, don’t be surprised if you come across French vigilante patrols along the borders.

The US-Mexico border-style groups, organised by the right-wing Generation Identitaire in the Hautes-Alpes, were told by police to stop in April but say they are still pursuing their mission of stopping migrants and those willing to help them.

Success story. The 2017 French presidential campaign was also affected by Russian interference. However, unlike the US and the UK, France managed to maintain its democratic integrity.

Tight seal. The European Union said it struck a deal with Macedonia to deploy border guards to the non-EU Balkan state to help cope with any migrant surges.

You shall pass. The European Commission said that Kosovo has met the remaining benchmarks to win visa liberalisation with the EU that other Western Balkan countries already enjoy.

Bought violence. Greek businessmen with close ties to Moscow have bribed citizens in Skopje to “commit acts of violence” ahead of the referendum on the name deal with Athens, according to Northern Macedonia’s PM.

Second round. Slovenia’s frontrunner to be PM, Janez Janša, said he did not gather enough support to form a new government, but is still hopeful to create a parliamentary majority.

Save the whales. Iceland’s government has pledged a review of its controversial whaling industry after a protected blue whale was allegedly killed this month.

Sue EU. Back in May, a lavender farmer and 10 other families decided to sue the European Union for failing to reduce greenhouse gas emissions. The farmer now explains the logic behind this action.

Lost in translation and then some. The UK tried to get one over on Michel Barnier by translating its new White Paper on future EU ties into most European languages and bypass the Commission negotiator. Unfortunately, the translated docs are full of errors and clunky language.

**Oh and speaking of summer holidays, EURACTIV will be jetting off on our own sometime soon, so look out for the next TEE in late August!**