Sent out every Friday at noon, Trans-Europe Express gives you an insider's view of the most important coverage from across the EURACTIV media network, its media partners and much more.

Romania’s justice minister has asked for the country’s top anti-corruption prosecutor Laura Codruta Kovesi to be sacked. But analysts say the ruling coalition is not aiming at Kovesi’s post. It is, apparently, going for the big picture – capturing all the state institutions and suspending the country’s president.

The social democrats of PSD and their junior allies from ALDE control the legislative and the government, but in the past year the ruling coalition has shown an unusual interest in changing the judiciary system.

Moreover, many see the last movement as a step towards the suspension of President Klaus Iohannis, who is a firm supporter of Kovesi and may refuse to sign her dismissal.

Justice Minister Tudorel Toader said he would ask the president to remove Laura Codruta Kovesi from the National Anti-Corruption Directorate (DNA), citing recent public scandals involving some of the prosecutors at one of DNA’s branches, which investigated, among others, a former prime minister and several prominent members of the Social-Democrat Party (PSD), the main ruling party in Romania.

Already, some PSD leaders are asking for the dismissal of the country’s chief prosecutor, who has already said there are no legal grounds to end Kovesi’s term at the DNA. Kovesi herself complained last week the anti-corruption directorate is the subject of coordinated attacks from the persons currently on trial or already convicted.

Several members of the two ruling parties, including the presidents of both PSD and ALDE, are currently on trial in files compiled by DNA.

While Toader’s request was expected ever since he took up the post, exactly one year ago, the motivation is thin and comes amidst a wave of unprecedented attacks against anti-graft operations.

And all of that is happening after the EU warned the government not to endanger the rule of law and undo all the progress made under the CVM, [Cooperation and verification mechanism the EU uses to monitor Romania’s performance] which was imposed on Romania and Bulgaria when they joined the bloc.

Earlier this week, Prime Minister Viorica Dancila, a former MEP, went to Brussels for high-level talks with EU officials. According to the official government statements, judiciary issues did not feature in the talks.

But the presidents of the European Parliament and the Commission both said they had told Dancila to continue consolidating the rule of law and anti-corruption fight in Romania.

Frans Timmermans, Juncker’s right-hand man for rule of law issues, is expected in Bucharest next week.

Romania is seen as one of the most corrupt states in the EU but under Kovesi’s helm, which started in 2013, the rate of conviction for anti-graft offences has risen sharply.

But Toader presented a report, which has not been made public yet, listing 20 alleged wrongdoings of the DNA chief prosecutor. He told reporters she was responsible for ”acts and facts intolerable to the rule of law”.

But some of the allegations are hardly grounded in facts – like that her interviews with foreign media have negatively affected Romania’s external image.

President Iohannis, who has the final say on the naming and removal of chief prosecutors, said the report was unclear and needed a thorough analysis.

PSD and ALDE leaders have in the past sent repeated signals they could start a procedure to suspend the president if he is against their amendments.

If the parliament approves the president’s suspension, the chief of Senate, Calin Popescu Tariceanu, the leader of ALDE and himself the subject of a DNA investigation for false deposition, will become the interim head of state and could sign into law some of the judiciary reforms proposed by the ruling coalition.

The head of the other parliament chamber, PSD leader Liviu Dragnea, received a suspended two-year conviction for election rigging in the referendum for the dismissal of former President Traian Basescu.

After the announcement, hundreds of protesters gathered in front of the government building in Bucharest on Thursday to show support for Kovesi and the rule of law.

Just one year ago, hundreds of thousands of demonstrators turned out for the biggest protest Romania has seen since the 1989 anti-communist revolution to support the fight against corruption, after the social democratic-led government tried to decriminalise corruption offences, such as the abuse of power.

More protests are called for Sunday. 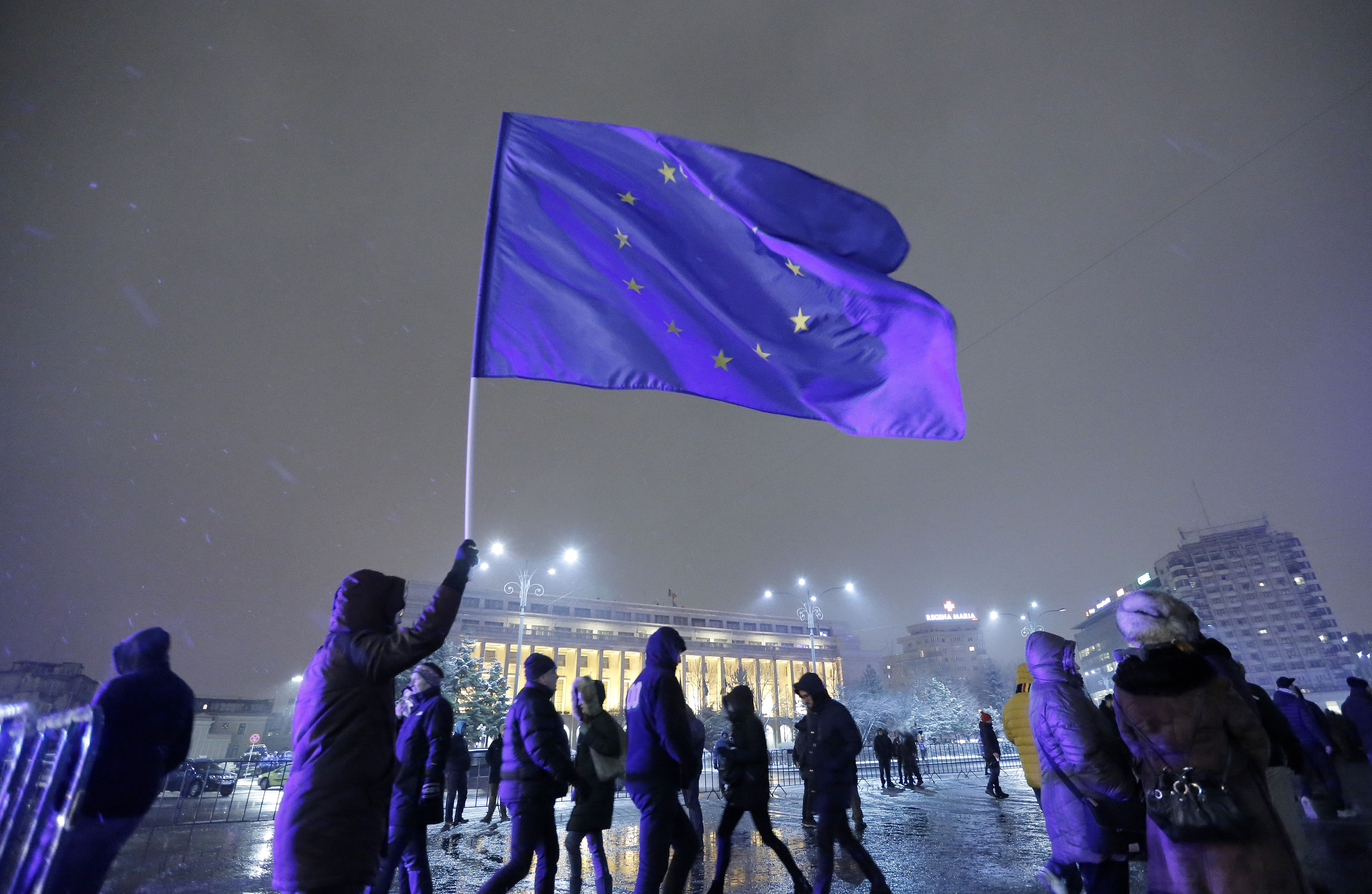 A Romanian man in front of the government building (background), waves an European Union flag during a peaceful protest. [EPA-EFE/ROBERT GHEMENT]

Kingmaker role. Former Italian Prime Minister Berlusconi cannot run for office again due to a tax fraud conviction. But if his party triumphs, he could turn to European Parliament President Antonio Tajani to boost Italy’s standing in Brussels.

Danger in Italy. If Lega Nord and Five Star Movement end up ruling Italy after the 4 March elections, it would be dangerous “because what they say they want to do is contrary to the democratic and human development of a great continent like Europe,” former European Commissioner Emma Bonino said.

British En Marche? Inspired by French President Macron’s movement, a new anti-Brexit party was launched in London this week, lacking any big names but vowing to revitalise the centre ground of British politics.

Start voting now! Members of Germany’s Social Democrats began voting on whether to enter a coalition with Chancellor Angela Merkel’s conservatives in a postal ballot which has the power to smash her dreams for a fourth term in office. The result of the vote, which runs to 2 March, is wide open.

‘Cities are sexy’. The mayor of Wroclaw insists that there are plenty of people in Poland that share the EU’s climate and environment goals.

Breaking the deadlock. The Czech Republic is a step closer to a new government after centre-left Social Democrats opened talks on forming a government with last year’s election winner ANO to overcome standstill that has prevented the formation of a majority coalition.

Paks spat. Anti-nuclear Austria lodged a legal complaint with the European Court of Justice against the EU’s approval of the expansion of a nuclear plant in neighbouring Hungary, which is the countries only nuclear facility and supplies around 40% of its electricity needs.

‘Perfect enemy’. Ahead of the Hungarian elections in April, the countries government has found the perfect enemy in George Soros and is using him to promote its “hate propaganda”, according to a Hungarian MEP.

Fake news? Latvia’s main banker was arrested by anti-corruption officials, with the defence ministry calling the corruption allegations part of a disinformation campaign aimed at damaging trust in the country and influencing October elections.

’Ideological opposition’. Bulgaria, followed by Slovakia, this week failed to ratify the Istanbul Convention on preventing and combating violence against women and domestic violence in a recent Central European wave of opposition to so-called “gender ideology”.

National unity? Albanian Prime Minister Rama opened the prospect that his country and Kosovo could one day have a single president as a “symbol of national unity” between Tirana and Pristina.

Accession hopes. Macedonia is making headway in its bid to join the EU, German Chancellor Merkel said, praising recent reforms by Skopje and the prospect of settling its chronic name dispute with Greece.