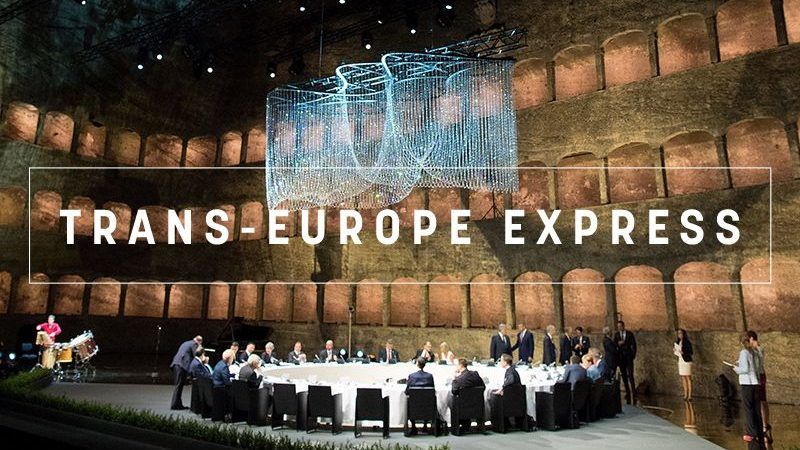 During the Salzburg EU summit, English-speaking media were quick to draw the link between the Austrian city and the setting of the Sound of Music. For French-speaking journalists, the informal meeting brought another song to mind: “Rock around the bunker” by iconic Frenchman Serge Gainsbourg.

This week’s Trans-Europe Express feature image truly captured the mood of the EU meeting. It was taken at the Felsenreitschule, a historic concert hall and theatre that was made famous in the English-speaking world by the perennial musical The Sound of Music [loved or abhorred, but that’s another story].

For those not really immersed in the Anglo-Saxon cultural sphere, the picture is much more reminiscent of a typical Wagnerian setting, evoking a dark and monumental fortress.

Or a bunker, with one reality being built inside, and a different one outside.

In case the situation in the Idlib region of Syria deteriorates, a new European initiative will be needed to manage the situation, Tsipras warned the EU leaders during the memorable Wagnerian dinner.

And while Tusk and Kurz were careful to underline the measures being discussed in order to dissuade potential migrants from reaching the shores of the European continent, S&D leader Udo Bullmann insisted that the Salzburg summit was not business as usual.

Talking to reporters on the side of the summit on Wednesday (19 September) with his voice at times covered by the hovering of the police helicopter, he said that too much was at stake in Salzburg and that he expected the Austrian EU Presidency to actively promote a humanitarian refugee policy.

“Europe’s answer can only be solidarity, not building a fortress Europe,” he said.

Outside the dark decorum of the bunker, some different, younger, rock-and-rolling voices started off, just as journalists were rushing to the closing press conference with Tusk, Kurz and European Commission President Jean-Claude Juncker.

In a clear contrast to the message that had been carefully distilled by European leaders during the informal summit, demonstrators were protesting against the fortification of Europe – and bracing themselves for possible clashes with the Austrian police.

“Write down the telephone number of the legal advisers with a waterproof pen on your body and refuse to talk should you be arrested,” the organisers urged demonstrators in a tweet.

Only a few kilometres away from Salzburg, in Germany’s Bavaria, polls are showing the collapse of Orban-friendly CSU and the rise of the Greens, meanwhile, the only party that openly supports what Udo Bullmann calls a humanitarian refugee policy in Germany.

And how does the French song go?

It swings, it jerks,

Orban’s manifesto. Could breaking up the EPP be the simplest way for the new right in Europe to come to power?

Brexit lesson. The British and Brexit might indeed finally teach Europeans a lesson – of the importance of mobilising young Europeans to vote.

‘Aufstehen’. Two weeks passed since the German leftist movement “Aufstehen” was officially formed – and according to their own account, it already has more than 140,000 supporters.

On the brink. Poland avoided a new EU lawsuit after the Commission, which was expected to refer the Polish Supreme Court law to the EU’s top court, surprisingly did not.

Questionable promotion. Germany’s controversial constitutional protection chief Hans-Georg Maaßen may have had to leave his current post but instead he has been promoted to state secretary with a bumped-up salary to boot.

Move to Brussels? Austria’s former chancellor announced he would run as top candidate for the European Parliament elections next year to help build a strong counterweight to growing nationalist forces in the country.

Border guard plan. The Czech Republic and Slovakia are bristling at beefing up of Frontex to help member states guard their own borders against illegal migration.

Serbian Pride. At first glance, Sunday’s Belgrade festivities showed that there has been some progress in forwarding the rights of Serbia’s LGBTI community. But lots of work remains to be done.

Raw politics. Salzburg was the story of the week and EURACTIV’s Sam Morgan went live in the European Parliament to pick apart what EU leaders did (and did not) agree on in Austria.