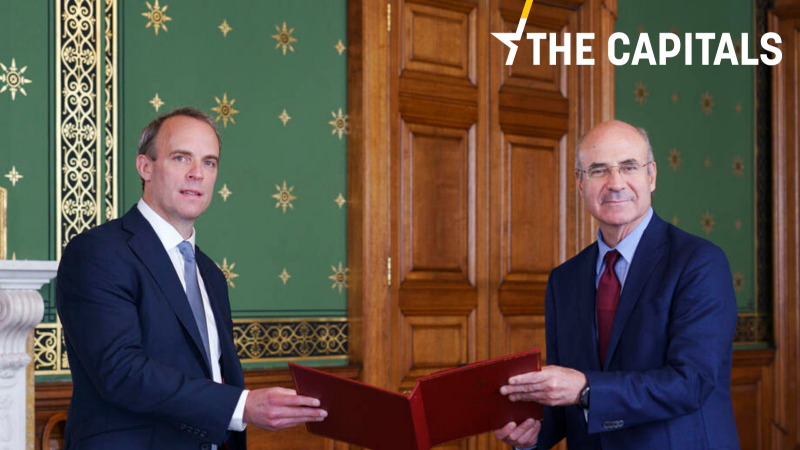 Before you start reading today’s edition of the Capitals, feel free to have a look at our Special Report on the Farm to Fork strategy targets and the article EU justice ministers promise to combat disinformation and racism.

23 MEPs ask for measures to save the hospitality sector. MEPs from the European People’s Party (EPP), socialist S&D and centrist Renew Europe groups have sent a letter to Commission’s Vice-President Valdis Dombrovskis asking him to take specific extraordinary measures to support Europe’s hospitality sector to cope with the implications of the pandemic. Sarantis Michalopoulos has the details.

First own human rights sanctions target Russia and Saudis. The UK on Monday (6 July) unveiled sanctions on 49 people and organisations behind the most “notorious” human rights abuses of recent years, for the first time independently as previously it has followed EU and UN sanctions regimes. EURACTIV’s Benjamin Fox has the story from London.

>> Read also: Huawei waits it out on possible UK ban

Debate on masks in shops. In the north-eastern state of Mecklenburg-Western Pomerania, the requirement to wear masks in shops could soon come to an end, after the state’s economy minister, Harry Glawe (CDU), came out in favour of scrapping the requirement before 4 August. While officials in Brandenburg and Lower Saxony voiced their support, the idea has drawn opposition from other states and from federal politicians, including from his own party. EURACTIV Germany’s Sarah Lawton looks into it.

Decision to purchase new fighter jets postponed. Austrian Defence Minister Klaudia Tanner (ÖVP) announced on Monday (6 July) that Austria would not be buying new SAAB-105 fighter jets to replace the 12 old machines currently used by the Austrian army. Besides, given Austria’s legal battle with Airbus linked to possible bribery during the procurement of Eurofighters back in 2002, Austria will not be purchasing the latter jets either.

Austria will continue to fully rely on its remaining 15 Eurofighter jets, although these cost ten times more per flying hour than the old Saab. The opposition has condemned the decision for putting a strain on the budget.

Environment to be key priority for new government. The French government reshuffle led by newly appointed Prime Minister Jean Castex includes a total of 31 members, with 16 ministers, 14 deputy ministers and 1 secretary of state attached to the prime minister. The team has been tasked with putting environmental policies at the heart of the country’s recovery effort. EURACTIV France has the full story.

Belgium mulls quarantine for arrivals from high-risk countries. Belgian health ministers will discuss on  Tuesday (7 July) whether quarantine and testing for travellers returning from areas with a high COVID-19 risk should be applied nationwide. Alexandra Brzozowski has more details.

Measures against COVID-19 reinforced. As the Grand-Duchy is facing a peak in COVID-19 cases and fearing a second wave, the country’s health ministry proposed a new coronavirus law with sanctions in case of infringement.

While only large gatherings currently have to respect measures such as two-metre social distancing, the wearing of masks and assigned seats for each attendee, the government is planning to extend these requirements to “any gathering” of more than 20 people. Besides, anyone testing positive for the virus will have to check-in with the Health Directorate within 48 hours and non-compliance with the rules could result in fines up to €500.

Quarantine “essential” for non-Schengen travellers. It is imperative that all measures to ensure travellers entering Italy from outside the Schengen Area are tested negative to the virus are enforced, said Italian Health Minister Roberto Speranza, adding that it is the correct approach to “take all possible measures to strengthen the control over people coming from countries with a high infection rate.” EURACTIV Italy’s Alessandro Follis takes a closer look.

In other news, a large-scale study conducted in Spain has found that only 5% of the population had developed antibodies against the coronavirus and that immunity against the novel coronavirus known as SARS-CoV-2 can be short-lived, Reuters reported.

Two separate presidential “debates”. As the staff of both presidential candidates – incumbent president Andrzej Duda and liberal Warsaw mayor Rafał Trzaskowski – were unable to organise a joint debate before the run-off election scheduled for 12 July, both were questioned separately in two different locations. EURACTIV Poland’s Łukasz Gadzała reports from Warsaw.

EPPO to launch investigations in countries that did join. Even though five countries, including Hungary and Poland, did not join the newly created European Public Prosecutor’s Office (EPPO), investigations will be carried out regarding “certain offences committed in relation to these member states, its citizens, or on the territory of these member states,” the first European Public Prosecutor, Laura Codruța Kövesi, told Euronews in an interview on Monday (6 July). “In addition, we will cooperate with the authorities of these states and will apply the judicial cooperation tools that are currently available,” she added.

According to Cornstein, this is because “the Chinese like them, Russians like them, and of course, they’re a member of NATO, so the US likes them a lot as well.” EURACTIV’s Vlagyiszlav Makszimov looks at what the ambassador had to say about Europe’s internal division on migration issues and geopolitics.

Who can count to 76? Croatian Prime Minister Andrej Plenković, the relative winner of Sunday’s parliamentary elections (5 July), claims to already have the support of 76 MPs necessary for a majority. His ruling HDZ (EPP) won 66 seats, meaning it is 10 short of getting the mandate to form a new government.

Yet, according to Plenković’s spokesman, the PM has already secured the support of eight minority MPs, and 2 liberal ones. EURACTIV Croatia’s Tea Trubić Macan has more details.

Criticism of proposed tracing app. In a debate in the parliament’s labour committee, the opposition accused Janez Janša’s government of “slowly introducing dictatorship”.

The debated bill on a new stimulus package provides a legal framework for introducing a mobile tracing app for coronavirus infections, but the opposition says the government has introduced hidden repression, control and supervision of citizens among the proposed measures. EURACTIV’s Zoran Radosavljević has more.

EU-mediated dialogue to continue in Brussels. French President Emmanuel Macron and German Chancellor Angela Merkel will host together with the EU a video summit on Friday (10 July) between Serbia and Kosovo aimed at easing tensions between the Balkan neighbours.

At the same time, Kosovo Prime Minister Avdulah Hoti and Serbian President Aleksandar Vučić will meet in Brussels on 12 July, a Commission spokesperson said on Monday (6 July), adding that the two leaders were continuing a high-level dialogue mediated by the EU, and that it was the first meeting in the normalization process since November 2018. Read the full story here.

In other news, Serbian Finance Minister Siniša Mali said on Monday that direct payments and tax reliefs approved by the government in response to the COVID-19 pandemic supported the Serbian economy and citizens with about €2.3 billion. EURACTIV Serbia has the details.