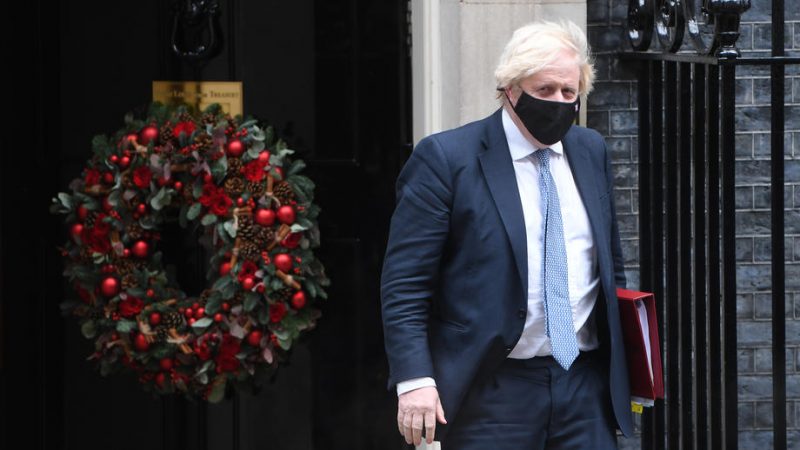 The leaked video appears to contradict more than a week of denials by Johnson and his ministers that a party took place, following newspaper reports dozens of staff had attended an evening-long gathering on 18 December 2020.

"In that video they're laughing at all of us for being stupid enough to believe they actually meant what they said when they told us we had to lockdown and have tiers 1, 2, 3 and 4 to keep us safe." @JuliaHB1 pic.twitter.com/o4GEdAHIyM

It is the latest instance of apparent government hypocrisy over restrictions after several previous scandals, including health secretary Matt Hancock resigning in June for breaking coronavirus curbs during an affair with an aide.

“We now know the government broke the rules, they partied and now they’re laughing about it — they’re treating the public with contempt,” Labour party leader Keir Starmer said.

“The prime minister needs to step up, accept what happened and apologise.”

"The govt broke the rules, they partied and now they're laughing"

Sir Keir Starmer has accused No. 10 staff of "treating the public with contempt" after footage emerged of senior aides joking about a Christmas party during a time of COVID restrictions.https://t.co/pY3NGkUlmz pic.twitter.com/Tup7x9iF59

Johnson, who has repeatedly claimed — including in parliament last week — that all virus guidance has been observed, faces off again later Wednesday against the main opposition leader in the House of Commons for weekly questions.

After the video was leaked to broadcaster ITV News late Tuesday, his office continued to insist no party had taken place.

However, Health Secretary Sajid Javid cancelled a series of broadcast interviews Wednesday morning amid uproar about it, leaving no minister to answer questions.

The footage shows Johnson’s then press secretary Allegra Stratton fielding questions from advisor Ed Oldfied and other staff during a rehearsal press conference on 22 December with no media present.

“This fictional party was a business meeting and it was not socially distanced,” she laughs over joking exchanges about “cheese and wine” and whether the prime minister would “condone” such an event.

At that time, London was under strict restrictions and indoor social gatherings of two or more people were banned, while office parties were specifically outlawed.

The video, which has led main news bulletins and drawn millions of views online, drew prompt condemnation from across the political spectrum, with some even calling for Johnson’s resignation.

“It really isn’t acceptable and I have to say, unfortunately, that on the basis of this behaviour… he should go, and he should go now,” leader of the Scottish National Party Ian Blackford said.

Conservative lawmakers were also among those demanding answers.

“This isn’t a laughing matter,” Tory MP Roger Gale told the BBC after he watched the footage with “total incredulity”.

He added Johnson must provide a full explanation to parliament, adding: “of course, to mislead the House of Commons deliberately would be a resignation matter”.

The scandal has echoes of an infamous incident earlier in the pandemic involving Johnson’s then chief aide Dominic Cummings, who drove hundreds of kilometres to stay away from his London home during a lockdown.

It triggered outrage over perceived double standards by the government, and is widely seen as leading to a drop in compliance with restrictions in its aftermath.

With the fast spread of the Omicron variant in Britain, some Conservative lawmakers said the latest scandal would make reintroducing curbs “much more difficult”.

Meanwhile Covid-19 Bereaved Families for Justice said it showcased “the behaviour of people who think they’re above us”.

“There are simply no words to describe how upsetting and shameful it is to then hear Boris Johnson’s team laughing about breaking the rules they had made,” it said in a statement.

“Others followed them and could only say goodbye to their loved ones through a screen.”

Under 24 hours ago we posted this video on the government’s statements on the No.10 Christmas party last year. It’s now been watched 2 million times & been in the @BBCNews ‘most watched’ list all day. Thanks very much if you watched and shared it. pic.twitter.com/vWBxhO6FQz