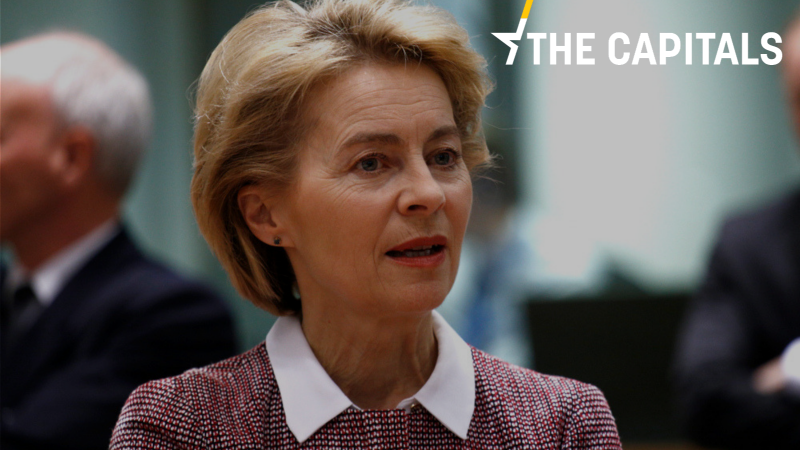 The Capitals brings you the latest news from across Europe, through on-the-ground reporting by EURACTIV’s media network. You can subscribe to the newsletter here. [Shutterstock]

Updates with comments of Dimitris Papadimoulis, Syriza MEP and Vice-President of the European Parliament.

German defence minister Ursula von der Leyen (VDL) faces a crucial vote on Tuesday (16 July), as she seeks to convince at least 374 lawmakers in the European Parliament to back her to become the next European Commission president.

The opposition mainly comes from the so-called progressive camp: the socialists (S&D), leftists and greens. These groups wanted one of the EU elections spitzenkandidats to lead the EU executive but are also unconvinced about VDL’s commitment on climate policy, migration and social issues.

German socialists (SPD) in the European Parliament have said they will vote against von der Leyen. But over the weekend, two SPD heavyweights spoke out in favour of her in Berlin. In an interview with Bild am Sonntag, former SPD chief Sigmar Gabriel said she could become a good Commission president but he expressed disapproval at the way she was nominated.

Similarly, in an interview with Welt am Sonntag, former interior minister Otto Schily praised VDL’s ability and criticised the 16 SPD MEPs who will vote against VDL on Tuesday. The centre-right CSU and CDU have also criticised SPD MEPs for their stance and have called on them to show responsibility.

In Rome, the coalition government is divided over VDL and the co-ruling parties will vote differently. While at first the right-wing Lega seemed to back her, the VDL has rejected support from Salvini’s party. In an attempt to reassure other progressive groups, VDL cancelled a meeting she was supposed to hold with Marco Zanni, president of the far-right Identity and Democracy (ID), the EU political group Lega belongs to. On the other hand, the anti-establishment Five Star Movement will vote in favour, after having had a “positive meeting” with her last Wednesday. Group leader Tiziana Beghin said they have the same priorities, referring to measures such as a European minimum wage.

In Paris, although French President Emmanuel Macron pushed for VDL’s candidacy, she cannot count on the support of French MEPs.

The far left and the Greens have already indicated that they will vote against VDL. The small delegation of the 5 French socialists insists that the next 5-year EU Commission must put more emphasis on the environment and social rights. Marine Le Pen’s MEPs have not shown any clear signals on how they will vote.

The 8 centre-right MEPs and the Macronists of Renew Europe are expected to vote for the German candidate. EURACTIV France says the vote will also be a test for the unity of the 21 so-called Macronist MEPs: will they respect the delegation’s voting instructions en masse?

“She has this sensitivity, something that in Poland is well-liked,” he added. However, EURACTIV has learnt that the ruling PiS party, which belongs to the EU Conservatives and Reformists (ECR), will make its final decision today.

In Athens, EURACTIV Greece reports that New Democracy (EPP) MEPs are not “so hot” about VDL, considering that Prime Minister Kyriakos Mitsotakis was one of the biggest supporters of Manfred Weber, but they will ultimately follow the EPP line and support her. Leftist Syriza MEPs will vote against unless they are really pressured by EU socialists based on a specific deal.

***Syriza MEP and Vice-President of the European Parliament Dimitris Papadimoulis denied that this is the case. He told EURACTIV.com that the stance of Syriza EU lawmakers is clear: “Ursula von der Leyen presented her priorities to GUE-NGL on 11 July. Following a discussion we had with her, we were not convinced that we should support her.”

In Sofia, Bulgaria’s MEPs are supportive but have doubts. Bulgaria has one of the most “mainstream” national delegations in the Parliament, as 15 out of 17 MEPs are in centrist groups: Seven from the EPP, five from S&D, and three from liberal RE. The remaining two are from ECR.

However, MEP Radan Kanev said in an interview with the website EUelectionsBulgaria.com, that the vote for VDL should not be taken for granted, and even in the EPP, there were divisions. Read more.

In Bratislava, MEP Martin Hojsík, from the centrist Progressive Slovakia-Renew Europe, said VDL’s views on the climate and biodiversity were optimistic. He also welcomed her plan to reform the bloc’s agricultural policy towards more climate and biodiversity protection. “Slovakia must be on the forefront of efforts to prevent climate threat and not fall behind the regional line dictated by Orban or Kaczyński,“ he added.

In Prague, Czech PM Andrej Babiš supports VDL, and spoke by phone with her on Friday about the possible composition of her Commission cabinet. His ANO party has six MEPs in the centrist Renew-Europe group, which will back VDL. On the other hand, the main Czech opposition party, Pirates, is not convinced and its three representatives in the Greens/EFA will likely not support her. The rest of the Czech MEPs are divided as well.

In Vilnius, politicians have not expressed a clear view on VDL but Lithuania’s President Nauseda spoke with her on the phone on Sunday, and then tweeted that he supports her. The Lithuanian MEPs will vote according to the their political groups’ line. VDL is known in Lithuania for her support for increasing the defence capabilities of the Baltic country.

In Zagreb, the majority of Croatian MEPs are sceptical about VDL. Unlike the 4 EPP MEPs who have openly supported her, S&D, RE, and ECR might need some convincing. ‘I do not have anything against her personally, unlike our German colleagues, but I resent the way this package has been delivered to the Parliament’ said Biljana Borzan (SDP-S&D). ‘The result of the voting will be arranged by the dominant groups, who have 443 hands’, said Ruža Tomašić (ECR), adding that von der Leyen will eventually serve as ‘Merkel’s voice in the Commission’.

EU-Mercosur deal very ‘complex’.The process to ratify the EU-Mercosur trade pact will be “complex” due to the discontent of the EU agricultural sector and the domestic politics of countries like France, Argentina and Brazil, Carlos Malamud, an expert on Latin America-EU relations at Elcano think tank, told EURACTIV’s partner EFE in an interview.

Malamud warned that it could take two or three years for the commercial part of the agreement to be approved and up to five years in the case of political dialogue and cooperation. (EURACTIV’s partner EFE).

New purpose. From 2020, the former site of the old NATO headquarters in Brussels will hold the trial of those accused of the 22 March terrorist attacks in 2016, Belgian Justice Minister Koen Geens has said. The three year investigation into the attacks ended in June 2019 and the exact date of the trial is still to be confirmed. (Alexandra Brzozowski, EURACTIV.com).

New public administration minister. As part of a government reshuffle, Croatian PM Andrej Plenković has nominated Ivan Malenica as Public Administration Minister, after his former colleague Lovro Kuščević was forced to resign amid real estate scandals. If confirmed, Malenica (33) will be Croatia’s youngest ever minister.

Plenković still has fill in several other key positions. EURACTIV Croatia reports that the PM  will choose young, pro-EU, and moderate candidates aiming to send a clear message to rebels in the ruling party. (Tea Trubić, EURACTIV.hr)

New programme of the opposition. Civic Platform (PO/EPP), the largest opposition party, has presented its programme for parliamentary elections due in October. ‘Schetyna’s six’, refers to the party leader’s name and is an answer to ‘Kaczynski’s five’, a package of social spending promises presented earlier by the ruling party.

In an interview with RedaktionsNetzwerk Deutschland, Heiko Maas, Germany’s Foreign Minister, has called for a new agreement on the distribution of migrants rescued at sea. Countries which want to welcome migrants should decide on a “binding distribution mechanism,” the SPD politician said. “Germany is prepared to make a substantial contribution and to guarantee to always take in a fixed share of rescued people.” Coalition partner CDU and right-wing opposition party AfD were quick to criticise his remarks.

Macron in Belgrade. Emmanuel Macron will today start (15 July) a two-day visit to Serbia, the first visit of a President of France in 18 years. It is expected that the agenda of his talks with President Aleksandar Vučić will cover economic cooperation, the halt in the Belgrade-Priština dialogue, as well as the EU perspective of Serbia and the Western Balkans. The signing of around twenty agreements has been announced.

Serbian Company Building Fence on Slovenian-Croatian Border. Slovenia is placing “temporary technical barriers” on a 40-kilometre section of the border with Croatia to stop the flow of migrants, and the job has been given to a Serbian company, Slovenian Interior Ministry officials have told the Vecernji List daily. Croatian media reported on July 12 that the Belgrade-based firm LEGI-SGS was chosen in a competition, and is ready to install the fence for about €4.8 million. The company in question is a representative office of a German company. (beta.rs, EURACTIV.rs)