US ambassador: We need the EU as a partner to tackle China 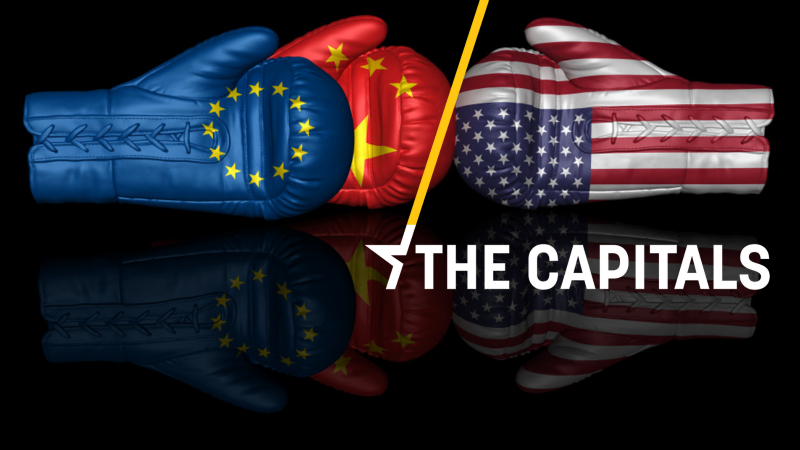 The US wants to redefine its “asymmetric” relationship with the EU, regardless of whether Brexit takes place, in order to establish a global system of standards to face the growing influence of China, US ambassador Gordon Sondland has said.

“Because the real objective here is China, the real goal is for the US and the EU to partner to tackle China and establish together a global system where we set the standards of conduct, and China follows our example, not the other way around,” he told a small group of journalists in Madrid on Wednesday, EURACTIV’s partner EFE reported.

Sondland added that since Donald Trump’s election, the US has not received from Brussels the “best friend” treatment warranted by seven decades of bilateral alliance.

“Talks on issues that concern us have been very difficult,” the diplomat said.

He also said he trusted that the leadership of the next Commission and the other European institutions will contribute to “straightening” the bilateral relationship. (EURACTIV’s partner EFE).

Macron’s last call on EU top job. French president Emmanuel Macron wants an agreement on the EU top job at Sunday’s extraordinary summit in Brussels. “The objective is that these nominations are made on Sunday […] because, otherwise, it means that we are entering a cycle of institutional dysfunction,” the French president told the press during his visit to Japan for G20.

The choice of one of the “spitzenkandidaten” was “no longer an option” said Macron. “We want a team that is consistent, has the best skills and is aligned with the strategy we have implemented,” Macron said.

EPP sources told EURACTIV.com that Macron’s “reactive” behaviour during the last summit helped them realise that his strategy it not aimed against Weber personally but part of a plan to “kill the EPP”.

“We realised that we have to stick together because he wants to repeat at the EU level what he did in France,” the sources said.

EURACTIV understands that the EPP fears that Macron may back Brexit EU negotiator Michel Barnier and this may split their political family.

On the other hand, Greek Prime Minister Alexis Tsipras has accused the EPP of killing the spitzenkandidaten process, because it picked as its candidate Manfred Weber, a “strictly party choice, which divides Europe”.

France claims ‘ecological and climatic emergency’. The National Assembly adopted on Thursday the key article of a energy and climate law which strengthens the country’s energy targets. The article promotes the “ecological and climatic emergency”. The bill includes plans to achieve carbon neutrality by 2050 and a 40% reduction in fossil fuel consumption by 2030, compared to previous 30%.

Closing a chapter. The investigation into the Brussels terrorist attacks of 22 March 2016, which lasted three years and three months, has been completed and handed over to the prosecutor. It is yet unclear when the date for the trial will be set. The attacks left 32 dead and 340 wounded in Zaventem and the Maelbeek metro station. (Alexandra Brzozowski, EURACTIV.com)

Wales EU funding concerns. Details about a new fund to replace EU economic aid for Wales after the UK’s withdrawal from the bloc will be released in 2020, a UK government minister has said.

The specifics of the Shared Prosperity Fund will not be published until next year, Brexit Minister Kwasi Kwarteng said, prompting the Welsh Government’s Brexit Minister Jeremy Miles to call the setback “outrageous.” Details on the funding were initially due to have been published before the end of 2018. (Samuel Stolton, EURACTIV.com)

Laying down the law. The European Commission has set its conditions to avoid the triggering of the excessive deficit procedure against Italy. “A solution can be found, but Italy must show that it will respect the rules in the future,” a Commission source told Italian news agency Ansa. In Osaka for the G20, Italy’s PM Giuseppe Conte has expressed confidence that an agreement can be found with the EU executive.

Just a mile off. The Sea-Watch rescue ship tried to dock into the port of Lampedusa but the Italian authorities ordered the vessel’s captain to turn off the engines just a mile away. Italy’s government accused the Netherlands of unlawful conduct, as Sea-Watch is a Dutch-flagged ship. However, the Dutch migration minister Ankie Broekers-Knol replied that they are not obliged to take the migrants. (Gerardo Fortuna, EURACTIV.com)

According to US Ambassador to Greece, Geoffrey Pyatt, this is going to increase the country’s role as an energy hub. “Projects like ExxonMobil, Total and HELPE Group exploration of Greece’s energy wealth will help diversify Greece’s economy beyond tourism and shipping, increase its geopolitical role and attract more US investors,” Pyatt said. French Ambassador Christophe Chantepy also hailed the news.

New migratory route facilitated by Turkey. Cyprus is seeing a major increase in the number of migrants from third countries arriving from Turkey, with the tacit approval of Ankara, Cypriot interior minister, Constantinos Petrides, told a group of Brussels journalists on Thursday (27 June).

In comparison, in 2018 the number was 2,000, while in 2017 it was only 137. A very small number of migrants arrived by boat, the vast majority crossing into the Republic of Cyprus through the occupied North.

Coal imports. Poland is one of the biggest importers of coal from Donbass, a Ukrainian region where the war between pro-Russian separatists and the Ukrainian army is ongoing. During the last two years, Poland imported over 300,000 tones. (Łukasz Gadzała, EURACTIV.pl)

A pro-European island of Central Europe. The three highest constitutional officials, President Zuzana Čaputová, Speaker of Parliament Andrej Danko and PM Peter Pellegrini signed a Joint Declaration, committing to a pro-European and pro-Atlantic orientation of the country. It builds upon the first declaration signed in 2017. “I believe that it is in the best interest of Slovakia to speak with one voice of understandable values, both at home and abroad,” Čaputová said. (Marián Koreň, EURACTIV.sk)

Audit report finally arrived. A draft European Commission audit report saying that Czech PM Andrej Babiš influences the distribution of EU subsidies officially arrived in the Czech Republic. According to the Czech agricultural ministry, Prague now has two months to react. Babiš, the second wealthiest Czech, is suspected of still owning the giant Agrofert chemicals, food and media group despite having formally transferred ownership to trust funds to comply with the law.

EU socialists happy with PSD new face. Romania’s PM Viorica Dancila said the Party of European Socialists (PES) appreciate the pro-European attitude and the change of political approach of the PSD’s new leadership. Dancila met the PES leaders, who froze their relations with the Romanian ruling socialist party earlier this year due to government attempts to weaken the rule of law.

But the former PSD leader Liviu Dragnea is now in jail, and Dancila said the government was no longer interested in changing justice laws. “Together we are stronger and the party I lead is determined to strengthen its relation with the EU social-democrat family,” Dancila said. (EURACTIV.ro)

Swedish banks and economic crisis. The parliamentary committee of Finances and Budget has issued its preliminary conclusions on the 2008-2012 financial and economic crisis. According to them, the Lithuanian bank, the Ministry of Finances, and the government have largely failed to ensure effective financial supervision system, especially of major Swedish banks, which deepened the crisis. (Angele Kedaitiene, http://eunewslithuania.com/)

Big pride. Croatian PM Andrej Plenković on Thursday congratulated Marija Pejčinović Burić for her election for the position of Secretary General of the Council of Europe. This is the greatest international, political and diplomatic success for Croatia, said Plenkovic. (Karla Junicic, EURACTIV.hr)

The Serbian authorities and Kosovo Serb representatives have reported shortages of food and other consumer goods resulting from tariffs on the goods coming from Serbia. Kosovo’s government in Pristina authorities has denied the reports. (beta.rs, EURACTIV.rs)

3 responses to “US ambassador: We need the EU as a partner to tackle China”