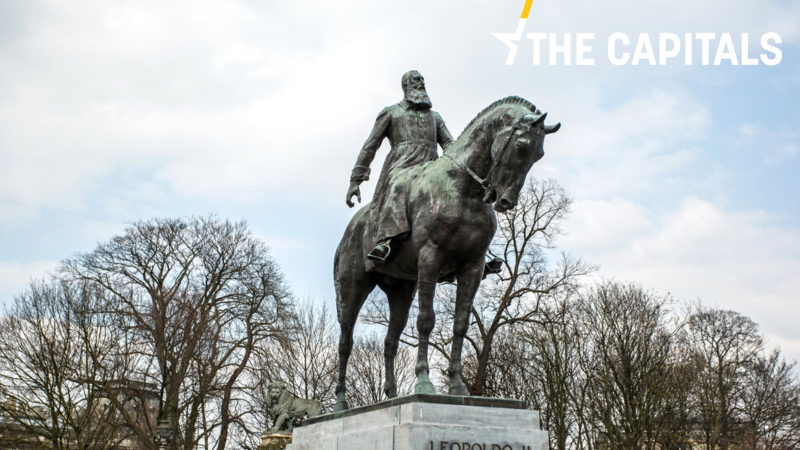 Several statues of Léopold II have been vandalized across the country. [Shutterstock/Oleksandr Osipov]

Before you start reading today’s edition of the Capitals, feel free to have a look at the article “Commission calls for full reopening of borders within EU“.

Now that many European countries have started lifting lockdown measures and opening borders, make sure you stay up to date with EURACTIV’s comprehensive overview, which is regularly updated with the help of our network of offices and media partners. Also, check our country update pages, such as the one for the Czech Republic.

As anti-racism protests in the US spread worldwide, following the killing of black American George Floyd, Belgium is facing a racism debate of its own kind, with monuments of former colonial king Leopold II being defaced.

Several statues of Léopold II have been vandalized across the country amid a growing campaign to remove all monuments built to honour the former king, Belgian newspaper Le Soir reported. Alexandra Brzozowski has more.

Why so much money to Italy and Spain? At a Coreper meeting yesterday (4 June), Lithuania, Slovakia, Slovenia, Hungary, Bulgaria and the Czech Republic argued for a larger share of the proposed Recovery Fund to be earmarked for lower-income member states, EURACTIV has learned. According to sources, EU member states disagreed on all levels ranging from the size of the Recovery Fund to the question on loans or grants and the spending period of the Fund.

Considering the differences among EU countries, nobody should expect results from the 19 June EU summit. If the European Commission’s proposal is adopted, then the first money from the Fund is expected in spring 2021, Commissioner Paolo Gentiloni recently said. (Sarantis Michalopoulos | EURACTIV.com)

The highly debated plan has also been surprisingly well-received by all sides. Read more about this from EURACTIV Germany: “Germany’s €130bn stimulus package praised by all sides” (Sarah Lawton | EURACTIV.de)

The French want some change, but not too much. Most French people are calling for a change in government as their economic morale scarcely improved in June, according to the latest barometer conducted by the polling organisation, Odoxa.

While the country entered phase two of lifting lockdown measures on Tuesday (2 May) and the number of new COVID-19 cases and deaths has declined in the past few days, the French are very pessimistic about the country’s future and expect any political change before the end of French President Emmanuel Macron’s first five-year term.  Three-quarters of French people (73%) want Macron to change his policies and two-thirds (64%) call for a government reshuffle, though 65% do not want Prime Minister Édouard Philippe to be dismissed. (EURACTIV.FR)

Rights watchdog to investigate BAME death toll from COVID. The UK’s Equalities and Human Rights Commission will launch an inquiry to examine “the loss of lives and livelihoods” of people from different ethnic minorities, in a wake of evidence that the death toll from COVID-19 and impact of the pandemic has been disproportionately high among black and ethnic minority people. Benjamin Fox has more.

Conservative ÖVP accused of campaign overspending. Chancellor Sebastian Kurz’s ÖVP might have exceeded the €7 million electoral campaign spending limit during the parliamentary elections in 2019, which it won by a comfortable margin, according to a report by Austria’s independent senate for party transparency.

While no official verdict is out, the report’s author, Barbara Sommerer, concluded there is “only a small” possibility that the ÖVP stayed within the limits. The party itself says it adhered to the law. (Philipp Grüll | EURACTIV.de)

Chasm opens between main government parties. A poll published on Thursday (4 June) shows that the popularity of the government’s two main parties is moving in opposite directions, which could lead to growing tensions once politics return to normal, as well as the possible break-up of the country’s five-party government. EURACTIV’s Pekka Vänttinen has the details.

Italy enforces new rules for access to beaches. Beachgoers who are not cohabitants will have to continue maintaining a distance of at least one metre – even in water – between each other, according to a series of recommendations published by the Italian National Institute of Health (ISS) on Thursday (4 June). However, if maintaining such distances turns out to be impossible, beachgoers will have to wear facemasks.

Access to the beach will also be denied to people whose body temperature exceeds 37.5 degrees Celsius and any form of gathering, such as parties or other events should be prohibited. Bathing establishments are also recommended to accept customers only after making a reservation and to register the customers’ data and keep them for at least 14 days, to be able to track any suspicious contact. (Alessandro Follis | EURACTIV.it)

“Spanish health care workers in direct contact with COVID-19 patients comprise the frontline in the fight against this disease in our country and have demonstrated since the health emergency began, a commendable level of professionalism and commitment,” the Princess of Asturias Award jury wrote in a statement. EURACTIV’s partner EuroEFE reports.

Greek tourism open to all on 1 July. As of 1 July, Greece intends to open its borders to all EU countries unless there are “unpleasant surprises”, Greek PM Kyriakos Mitsotakis has said, adding that health protocols should be strictly applied.

Meanwhile, the Greek statistics office announced yesterday (4 June) that the economy’s recession for the first quarter of 2020 was 0.9% while the EU average was 3.8%. The figure is encouraging for the country; however, tourism, which is its main industry, will be put to the test this summer. (Sarantis Michalopoulos | EURACTIV.com)

When it comes to Slovakia, travel restrictions between the two countries were removed at midnight yesterday (4 June) and those travelling were obliged to undergo a two-week quarantine or show a negative COVID-19 test upon return. (Lukáš Hendrych | EURACTIV.cz)

State of danger to end mid-June. The state of danger will probably end after 16 June, with theatres, cinemas, museums and bathhouses allowed to open, said minister Gergely Gulyas.

Meanwhile, 11,140 companies have applied for the Hungarian short-time work scheme support for 145,000 employees, with the average support provided per worker at €470. (Vlagyiszlav Makszimov | EURACTIV.com)

Hazardous chemicals in Bratislava. It has been confirmed that significant chemical contamination of soil and water was found in the area and surroundings of an old chemical plant in Bratislava, after environmental activists dug up the geological study of the premises commissioned in 2009 by Istrochem, the company currently running the plant. By law, the study was classified for 10 years until 2019.

While Istrochem stated that most damages happened in the 1960s, the company itself has since 2002 been one of Czech Prime Minister Andrej Babiš’ assets. However, the liquidation of the chemical damages was not part of the deal with the state at the time of the plant’s purchase. (Zuzana Gabrižová | EURACTIV.sk)

Polish government wins confidence vote. Addressing the Polish Sejm on Thursday (4 June), Prime Minister Mateusz Morawiecki told the opposition they should recall his government if they have enough votes or “stop festering and inventing alternative subjects” for political disputes. Morawiecki had tabled a vote of confidence. Alexandra Brzozowski has the story.

Bulgaria closes border with North Macedonia. Because of the increase in COVID-19 cases in North Macedonia, Bulgaria has decided, again, to close its borders with its neighbour.

North Macedonia’s authorities reported a record of 120 new COVID-19 infections within 24 hours on Thursday (4 June). Those who are allowed to enter the country from North Macedonia, such as Bulgarian citizens or medical workers, for example, will be quarantined for 14 days. (Krassen Nikolov | EURACTIV.bg)

Aid for large companies. The government adopted a program to support large companies affected by the coronavirus crisis, a few weeks after the introduction of a similar program for SMEs. The scheme includes guarantees for loans, direct support from the government for investment or working capital and de minimis aid for banking loans. Finance minister Florin Citu said the program, which should be operational within a month, has a budget of 8 billion lei (about €1.65 billion) and it will leverage 28 billion lei of investments.
///

Police raids over airliner’s bankruptcy. Police have raided the headquarters of the bankrupt Adria Airways company and carried out searches of several houses and offices in the area of ​​Kranj and Ljubljana. Pre-trial proceedings have been instituted against two foreign nationals but the police did not disclose further details, while local media say the raid was motivated by a suspicion of abuse of office.

The privately-owned Adria Airways, which the government sold to a private equity fund in 2016, filed for bankruptcy in September 2019 and cancelled all flights after financial problems forced it to ground most of its planes. (Zoran Radosavljević | EURACTIV.com)

Growing opposition to court ruling. An increasing number of people are opposing the ruling of Croatia’s High Misdemeanour Court, which decided on Wednesday (3 June) that the chant “For the Homeland Ready” at the start of a song by popular singer Marko Perkovic Thompson does not amount to an offence.

While the NGO House of Human Rights said the court’s ruling doesn’t change the fact that this Ustasha salute symbolises Nazi and fascist ideology and is contrary to Article 39 of the Constitution, while the Democrats led by parliamentarian Mirando Mrsić suggested yesterday that the salute should be outlawed. The day before, the Civic-Liberal Alliance (GLAS) said that the ruling is yet another step in distancing Croatia from civilised countries and peoples. However, the ex-presidential candidate, Homeland Movement party leader, Miroslav Škoro, disagrees. EURACTIV Croatia’s Karla Junicic takes a closer look.

In other news, the Croatian government on Thursday (4 May) authorised Finance Minister Zdravko Marić to sign an agreement on voluntary guarantees between Croatia and the European Commission considering the new instrument for temporary Support to mitigate Unemployment Risks in an Emergency (SURE). Read more. (Karla Junicic, EURACTIV.hr)

Meanwhile, Serbian Foreign Minister Ivica Dačić said on Thursday (4 June) that information suggesting that Serbia would put an end to its campaign revoking the recognition of Kosovo’s independence was untrue, although diplomatic sources in Brussels have confirmed it to reporters, the N1 Television has reported.

The information being refuted by the country’s foreign minister was reported by Radio Free Europe (RFE), which stated that Serbia had made the concession to contribute to an atmosphere that ensured dialogue on the normalisation of relations with Kosovo would resume. EURACTIV Serbia has more.