US sets foots in the Balkans amid growing tension with EU 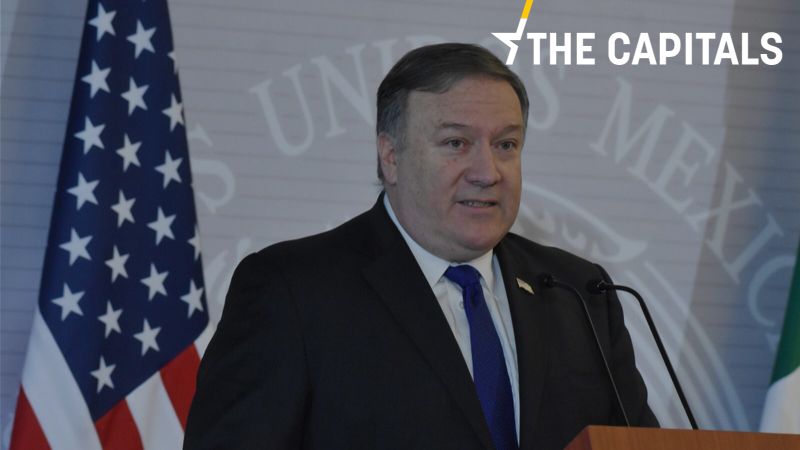 Interestingly, in all visits, Pompeo warned about the risks of Chinese investment in sensitive technologies and called on leaders to take the “right decisions”. [Shutterstock]

A series of visits from US State Secretary Mike Pompeo to several Balkans countries have confirmed that the US is increasingly interested in the region. Meanwhile, US relations with Western Europe continue to escalate.

On an official visit to Athens over the weekend, Pompeo signed an extended defence agreement with Greece. He also slammed Turkey’s for its drilling for hydrocarbons in the Eastern Mediterranean, calling the country’s actions “illegal” and “unacceptable”.

“We want to make sure that rules govern international exploration in the Mediterranean Sea’s energy resources and that no country can hold Europe hostage,” he said. The new defence deal is related to the use of the Souda Bay US Naval Base, the airbases of Stefanovikeio and Larissa in central Greece, as well as the port of Alexandroupolis, the commercial centre of northeastern Greece.

Alexandroupolis will play a key role for US troops to move from the Mediterranean to Europe and the Baltic countries bypassing Turkey. It will also prove useful for the transportation of US liquefied natural gas to Europe.

Bulgarian Energy Minister Temenuzhka Petkova mentioned the interconnector Greece-Bulgaria (also known as Stara Zagora-Komotini) and the participation of Bulgaria in the construction of the LNG terminal in Alexandroupolis in recent interviews.

The minister told national channel BNT on Sunday (6 October) that the interconnector would be ready in the second half of 2020. She added that a financing agreement with the European Investment Bank will be signed on Thursday (10 October) and that the pipeline constructor and pipe supplier have already been selected.

Bulgaria is expected to buy 1 billion cubic meters per year of Azeri gas from the Southern gas corridor (almost a third of its annual consumption). The gas will be transported via the Greece-Bulgaria interconnector.

Just before, Pompeo visited North Macedonia and Montenegro. Regarding North Macedonia, he said he expected the country to become the 30th NATO member by the end of the year and praised the long-awaited name change deal with Athens.

In Montenegro, which is already a NATO member, Pompeo called on the country to do more to combat corruption and ensure press freedom. He added that Podgorica shared the US views on several foreign policy issues, citing cooperation in cybersecurity. For example, Podgorica helped develop protection against Russia’s latest software, which protected billions of devices worldwide.

On each visit, Pompeo warned about the risks of Chinese investment in sensitive technologies and called on leaders to take the “right decisions”. He also said Beijing might offer bribes to win some infrastructure deals in the Balkans.

In July, an expert from Huawei, a Chinese tech giant, told EURACTIV that it was a “historic” opportunity for Greece and Cyprus to take the lead in the rollout of 5G technology in southeastern Europe.

Meanwhile, the White House wants US Ambassador to Germany Richard Grenell to be its special envoy for the Belgrade-Pristina dialogue.

Commenting on the issue, EU Commission Spokesperson Maja Kocijančić said the US and the EU had a shared interest in the stability of the Western Balkans. Both Belgrade and Pristina have welcomed the move.

But on the other side of the continent, relations with the Americans are getting worse.

On Friday, the Spanish government summoned the US ambassador to Spain, Duke Buchan, to complain about the new increase in tariffs announced by the US Administration. Washington has decided to impose 10-25% tariffs on European goods after the World Trade Organisation (WTO) had ruled in favour of the US and against the EU over subsidies for Airbus, a European aircraft manufacturer.

In case the US rejects dialogue, the Spanish government stated that it will react “immediately with firmness and clarity” to defend Spanish interests. The government will employ all possible legal avenues and collaborate with the European Commission and other EU countries, according to an official statement.

See more: Tug of war between Madrid and Washington over US tariffs

France and Germany aimed at Google regarding Europe’s copyright legislation. French President Emmanuel Macron said Paris and Berlin would work on a joint initiative against Google. Both countries want the American company to pay to display links to press articles, while the American company intends to discontinue referencing articles to avoid having to foot the bill. The subject will be discussed at the Franco-German Council of Ministers, which will take place in Toulouse on 16 October.

In the meantime, US Attorney General William Barr has asked for Italy’s help in the inquiry over a possible tie between President Donald Trump and Russia in the 2016 US elections. Barr met twice with Italy’s spy chief Gennaro Vecchione in August to request information about the Maltese professor Joseph Mifsud. The professor had informed Trump’s adviser George Papadopoulos that Russia had emails in its possession that could damage Hillary Clinton.

The leader of the newly born centrist party Italia Viva, Matteo Renzi, put pressure on PM Giuseppe Conte, asking him to provide further explanations on the spy story. Conte, who’s responsible for the secret services, had allegedly authorised both meetings.

Brexit postponed, again? The Finnish Prime Minister and current EU Council President Antti Rinne, expects Brexit to be postponed once again. It appears that British Prime Minister Boris Johnson has only now understood “what a mess this is and he is having difficulty in making a proposal to get out of it,” the socialist told German paper Welt am Sonntag. “That is why I fear that the October summit could be more about an extension than bringing concrete solutions to the situation,” Rinne added. (Claire Stam | EURACTIV.de)

The countdown has begun. If the 13 October parliamentary elections were to take place last Thursday, the ruling Law and Justice (PiS/ECR) party would obtain 44.3% of the votes, according to the latest IBRiS survey. The Civic Coalition (KO/EPP) would come second (23.4%) followed by the Left (Lewica/S&D) with 12%.

Meanwhile, PiS president Jarosław Kaczyński has offered yet another pre-election promise. On Sunday, he told the public television (TVP) that his party would guarantee that farmers would receive direct payments from the EU budget similar to what Germany gets. “It will be €278 per hectare or even more,” he added. The average direct payments for farmers in the EU are €259 per hectare, but there are also farmers in the EU who receive over €400 euros. Currently, Poles receive just over €200 and Poland just obtained the agriculture portfolio in the next Commission.

Public concerns. Over half of the Slovak population is worried about the information retrieved from the mobile phone of Marián Kočner, an opinion poll for TV Markiza has found. Marián Kočner is accused of ordering the murder of journalist Ján Kuciak. He has been in jail for the murder trial and is also facing a civil suit. Kočner‘s messages sent through the Threema application are part of the investigation and show, among other things, that the judges had been corrupted and that the ex-secretary of state at the ministry of justice Monika Jankovská was involved. “Tell her to do what she should or she will end ‘à la Kuciak’,” Kočner wrote to Jankovská on the day the media broke the murder story. (Zuzana Gabrižová |EURACTIV.sk)

ECHA vs. Czech gun holders and fishermen. The EU ban on lead ammunition and fishing sinkers could apply in 2023, angry Czech fishermen, hunters and other licensed arms holders have said, referring to the European Chemicals Agency’s (ECHA) plan. Arms license owners’ organisation Liga Libe said the Agency’s planned public consultation “will only serve as an alibi”.

The Czech lower house also posses a potential prohibition. ECHA wants lead products banned due to environmental impacts, but Czechs argue that there are no suitable substitutes. (Ondřej Plevák|EURACTIV.cz)

Clash over the budget. The Party of Pensioners (DeSUS) is planning an amendment to the budget adding €50 million for pensions. The problem is that in view of the reduced economic growth projected for 2020, the centre-left coalition had agreed not to amend the budget proposal and reduce expenses. Because of the “anti-social” cut of expenses, Levica (radical Left), which supports the coalition, said: “This is the beginning of the end of our cooperation with such a government”.

But according to information, the radical right SNS party is planning to support the budget. Moreover, the centre-right opposition party NSi (EPP) is thinking of approaching the coalition. The reason is that Prime Minister Marjan Šarec’s popularity is very strong while it is questionable whether SNS would enter the parliament in the case of snap elections. NSi, however, would like to participate in the government (it’s been in opposition since 2008). The Social Democrats (SD) are organising a meeting between the coalition and Levica to calm down the situation and avoid the help of SNS or NSi. (Željko Trkanjec |EURACTIV.hr)

Mario Vargas Llosa on feminism. In an interview with EURACTIV’s partner Jutarnji.hr, Latin American novelist Mario Vargas Llosa has said that although the fight for equality should be supported, there is an aspect of feminism that should be confronted: “It refers to all those tendencies that intend to go beyond the fight for equality and to establish some bizarre intersex war between men and women. It is a deformation of feminism and the women’s rights movement.”

“And it is amazing that these tendencies somehow managed to become synonymous to women’s rights. It was just plain stupid and unnecessary, and it only succeeded in bringing up new generations of chauvinists and idiots”. (Željko Trkanjec |EURACTIV.hr)

Against plastic bags. A new regulation to establish a fee for plastic bags up to 50 microns in thickness is being prepared in the Federation of the BiH (one of two entities) and will apply to all bags regardless of the size and shape of the handles. The exact date for a complete ban on the use of plastic bags will also be provided. According to a decision by the European Commission, the production and use of all disposable plastics such as plates, glasses, straws, biodegradable plastics, etc. will be banned. Sarajevo wants to follow the best European and global practices when it comes to regulating the use of plastic. (Željko Trkanjec | EURACTIV.hr)