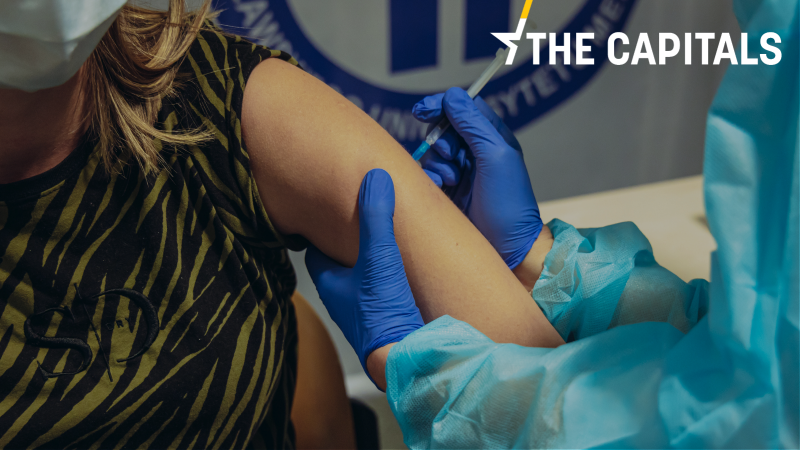 Man is being vaccinated during COVID-19 vaccination program with the Pfizer BioNTech vaccine at the Medical University of Warsaw, Poland - December 29, 2020. [Shutterstock/Fotokon]

Before you start reading today’s edition of the Capitals, feel free to have a look at the exclusive op-ed by Commission VP Vera Jourova ‘After Trump, we must fight to rebuild the ruins of democracy‘.

Also, feel free to have a look at the story ‘Romania rejects ‘divisive’ Greek proposal for vaccine certificate’ by Sarantis Michalopoulos.

People who get vaccinated against COVID-19 in Poland will receive a confirmation document, a “vaccine passport”, after having received a second dose of the vaccine, according to Polish deputy Health Minister Anna Goławska. Poland is the latest country to welcome the idea of a “vaccine passport” as many member states consider solutions to restart cross border travel. Read more.

Group of CDU leaders comes out in support of Laschet. After suffering in recent opinion polls, North Rhine-Westphalian leader Armin Laschet gained a boost in the race for the CDU helm on Wednesday, after receiving endorsements from five CDU parliamentary group leaders from the country’s eastern and western states. Read more.

Though border controls were introduced along both borders last Saturday and a press release from the interior ministry says this aims to uphold “public calm, order, and security”. (Philipp Grüll | EURACTIV.de)

Swedish Social Democrats lose pole position. The popularity of the Social Democratic Party of Prime Minister Stefan Löfven, who have been increasingly under fire at homey for their poor handling of the pandemic, is now in free fall, according to a new poll published on Wednesday and conducted by newspaper Aftonbladet and research company Demoskop. Read more.

Estonian PM resigns awaiting corruption charges. Estonian Prime Minister Jüri Ratas resigned on Wednesday after an enquiry into a property development project in the capital which could see him accused of corruption. Read more.

Lithuanian MEP apologises in homophobia row. MEP Viktor Uspaskich accused of homophobia apologised on Wednesday after fellow lawmakers threatened to expel him from the liberal Renew grouping in the European Parliament. Read more.

Portugal announces new lockdown, schools to remain open. A national lockdown, similar to the one in force between March and April, will be imposed as of midnight on Thursday, Prime Minister António Costa announced on Wednesday, warning that this is both “the most dangerous moment, but also a moment of greater hope”. Read more.

Greek socialists say Mitsotakis is no longer a ‘centrist’. The Greek socialist “Movement of Change” party (S&D) has lashed out against the ruling conservative New Democracy party (EPP), accusing it of a right-wing turn that’s putting the country’s democracy at risk. Read more.

Czech Republic not interested in EU banking union, for now. Prime Minister Andrej Babiš (ANO) has followed a recommendation by the finance ministry not to enter the European banking union for now. Read more.

UK COVID-variant appears in Hungary. Three patients were diagnosed with the more infectious variant of coronavirus first identified in the UK, Hungary’s chief medical officer Cecília Müller told journalists on Wednesday, adding that “it was obvious that Hungary could not avoid the variant either.” Read more.

Romanian government mulls pension increase during pandemic. While Romania still has no budget for 2021, the country’s Constitutional Court ruled on Wednesday that the Parliament needs to clarify a law requiring a 40% increase of pensions. The government wants a much lower increase, in the current economic context, and it may now have the Parliament’s support. Read more.

Vaccination with Moderna vaccine begins in earthquake-destroyed Petrinja. Epidemiologists used the Moderna vaccine to start jabbing residents of Petrinja, the town that received the first shipment of 3,600 Modern doses because the devastating earthquake that hit the country on 29 December increased the risk of the virus spreading. Read more.

‘Slim chance’ for no-confidence. The planned no-confidence motion against the government has a slim chance but still might succeed, and would then result in early elections, Slovenian Prime Minister Janez Janša said on Wednesday. Read more.

Bihać mayor opposed to migrants being placed in centre financed by EU. The German and Austrian ambassadors to BiH, Margret Uebber and Ulrike Hartmann, together with EU Delegation head in BiH, Johann Sattler, paid a visit to the Lipa migrant camp, near northwest city Bihać. Read more.

A step towards impeachment, the Balkan way? Montenegro’s President Milo Đukanović has announced that he will not sign the proposals for the dismissals of military chief of staff Major General Dragutin Dakić and Major General Rajko Pešić because the applicable regulations were not complied with. Instead, he announced he would convene a session of the Defence and Security Council.

This is yet another conflict between the government and the president. Meanwhile, Prime Minister Zdravko Krivokapić decided to convene a meeting with parliament Speaker Aleksa Bečić, Deputy PM Dritan Abazović, and Đukanović. It would be the first official meeting of government representatives with the president, who will be confronted – as Belgrade daily Blic reported – with his “attempts to obstruct the work of Montenegrin institutions.” The government, Blic wrote, is not happy, with the fact that Đukanović is finding places for the former members of the authorities who were fired. (Željko Trkanjec | EURACTIV.hr)

One response to “Vaccinated Poles to receive special ‘passports’”