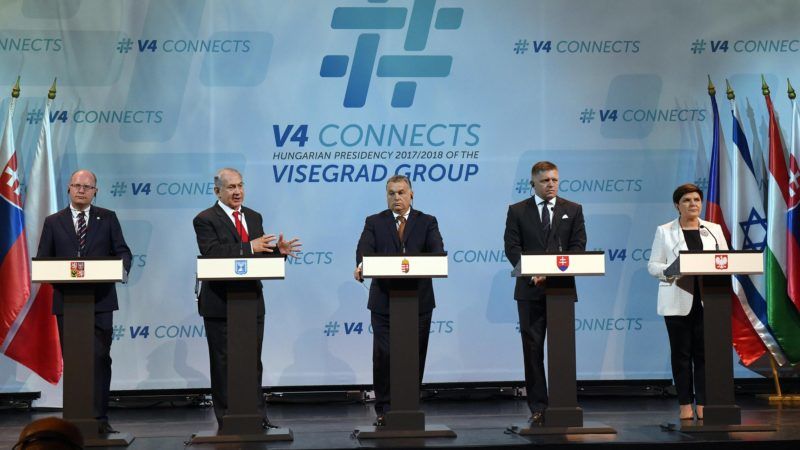 The comments were the latest example of divergence between Eastern and Western Europe, where questions of national sovereignty, migration and civic freedoms have also stirred friction. US President Donald Trump lent support this month to Poland, target of criticism by the EU he has disdained, with a visit to Warsaw.

Netanyahu met the Visegrad Four leaders of Hungary, Poland, Slovakia and the Czech Republic, who backed Israel and called for an improvement in the EU’s relations with the state.

“I think Europe has to decide whether it wants to live and thrive or it wants to shrivel and disappear,” Netanyahu told the leaders behind closed doors in Budapest.

In an audio recording of the remarks obtained by Reuters, Netanyahu goes on to say: “It’s a joke. But the truth is the truth, both about Europe’s security and Europe’s economic future. And both of these concerns mandate a different policy towards Israel.”

Israel has often been criticised in Western Europe on matters such as its settlement policy. The recent closeness of Netanyahu with leaders like Hungarian Prime Minister Viktor Orbán has been viewed with suspicion in the European Union.

Netanyahu asked the four premiers point blank to support his country in Brussels.

“If you, as the Visegrad group, can begin to advance this conception, I think this would be… beneficial to you but I think it would actually be beneficial to all of Europe.”

“We’re part of European civilisation. You look at the Middle East – Europe stops in Israel. That’s it.”

At a later press briefing Netanyahu repeated the statements in a more diplomatic language, saying Israel “serves a unique function in being the one Western country in the region, the one country that is able to limit and fight from within the region this great danger to all of us.”

“We’re often criticised by Europe, (more often) than any other place in the world… It’s time to have a reassessment in Europe about the relations with Israel.”

Hungary’s Orbán, himself often accused in Brussels of flouting liberal democratic values such as press freedom, said he and other Visegrad leaders would support better relations between the EU and Israel.

The group will meet in 2018 in Jerusalem at Netanyahu’s invitation.

“The Visegrad Four shares the Israeli view that external border defence is key,” Orbán told a press briefing. “Free movement of people without controls raises the risk of terror.”

Orbán has been criticised in the EU for erecting a razor wire border fence and refusing to accept migrants under EU agreements, preferring “ethnic homogeneity”.

But he backed down from a recent rhetorical overture toward far-right groups amid accusations of anti-Semitism.

“The EU should appreciate the efforts Israel makes for the (Middle East) region’s stability, which serve Europe as it spares us from newer and newer waves of migration,” he said.