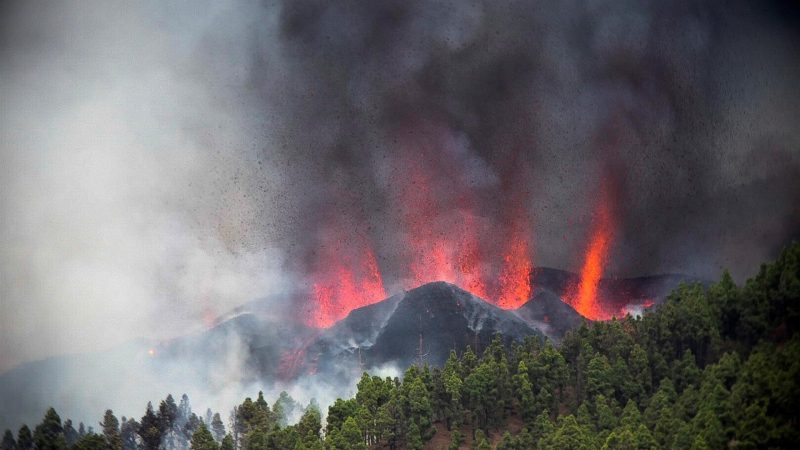 The last major volcanic eruption in the Canary Islands took place underwater off the coast of El Hierro between 2011-12. [EFE/Miguel Calero]

A volcano erupted Sunday (19 September) on the island of La Palma, in Spain’s Canary Island archipelago, following a week of seismic activity in the area. EURACTIV’s partner EFE reports.

Spain’s socialist Prime Minister, Pedro Sánchez, suspended his planned trip to New York, scheduled for this week, where he was planning to attend the UN general assembly, and travelled to La Palma, EFE reported.

The eruption emerged from the Cumbre Vieja volcanic ridge on La Palma, located to the southeast of the island’s most populous municipality, Los Llanos.

The eruption spewed lava and a tall column of dark volcanic material into the air over an unpopulated area, according to an EFE correspondent who witnessed the event.

It comes just hours after the local scientific committee for volcanic risk management, Pevolca, confirmed that preemptive evacuations of people with reduced mobility had begun due to the threat of an eruption.

Seismic activity has shuddered the island over the last week with thousands of tremors. Land deformations indicated the presence of magma below the surface.

The last major volcanic eruption in the Canary Islands took place underwater off the coast of El Hierro in 2011-12.

The last two volcanic eruptions at the Cumbre Vieja ridge took place in 1949 and 1971.

La Palma is located in the northwest of the Canary Islands archipelago, which is also home to the popular tourist destinations of Lanzarote, Tenerife and Gran Canaria.

“Over 1,300 people have been evacuated from the region surrounding the volcano”, Spanish public television (RTVE) reported Sunday night.