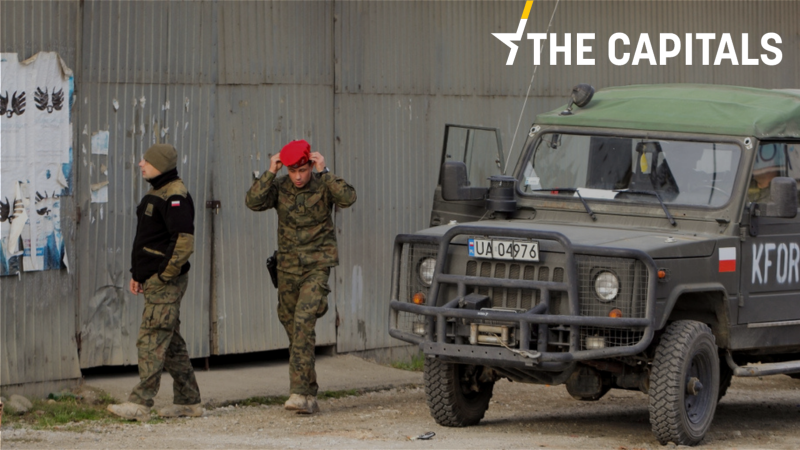 According to Vučić, a withdrawal of the NATO and UN-led peace-keeping forces from Kosovo “would be an absolute catastrophe” for Serbia. [Shutterstock/Nada B]

Before you start reading today’s edition of the Capitals, feel free to have a look at the article “Republicans urge Biden to end Iran talks over Hamas rockets“.

In other news, Serbia and Greece are set to sign an agreement cancelling roaming fees next week, Serbian Prime Minister Ana Brnabić announced on Thursday. More

EU ministers in search of consensus on sustainable tourism. Portugal’s secretary of state for tourism hopes that a high-level forum on Friday (14 May) will resolve “two major concerns”: the commitment of member states to sustainable tourism and funding lines for this transformation. More

Austria’s Kurz won’t resign amid anti-corruption probe. Austrian Chancellor Sebastian Kurz said he will “certainly not resign” despite being investigated by the Prosecutor’s Office for Economic Affairs and Corruption for allegedly giving false testimonies to the parliament’s investigation committee. Read more.

No freedom without COVID passport, says health minister. Belgian Health Minister Frank Vandenbroucke has said pre-pandemic freedoms cannot be regained without a COVID-19 passport, or a variant thereof, according to Belga news agency. He also said that the COVID Safe Ticket mechanism announced by the Belgian government this week to allow the organisation of future mass events will work on the same principle.

“I’m not interested in the terminology […] but without such an instrument it will not be possible to regain our freedom,” Vandenbroucke said. However, a Belgian version of the digital health certificate will likely not be in place until the end of September. “But it will come,” he said. (Alexandra Brzozowski, EURACTIV.com)

Germany relaxes entry rules. Since Thursday uniform nationwide COVID-19 rules will apply for those returning from vacation and other people traveling to Germany. There are now no quarantine or test requirements for those who have been completely vaccinated or recovered from coronavirus unless they come from an area with new, more contagious virus variants. More on the federal government’s new regulations here. (Alexandra Brzozowski, EURACTIV.com)

Government to give broadcaster RTL more than €10 million annually. A new deal between broadcaster RTL and Luxembourg’s government will see the broadcaster receive more than €10 million annually from 2024 once their current agreement expires, Prime Minister Xavier Bettel told a parliamentary committee meeting on Tuesday. The PM said that the final cost of the new contract “cannot yet be quantified”, but it would “certainly have an upward trend”. (Anne Damiani | EURACTIV.fr)

Report: Finnish economy will grow but unsolved problems remain. Economic growth in Finland will see a boost in 2021 after which it will start to normalise substantially, the finance ministry said in a report published on Wednesday. Read more.

In other news, the Finnish parliament picked up its debate of the EU recovery fund Thursday evening at 8 pm after the debate that continued through Wednesday night was suspended Thursday morning. Most speeches, which included excerpts from church hymns and the fairy tale Little Red Riding Hood, were delivered by Finns Party MPs who took turns in delaying the vote, the news agency STT reported. Vote on the EU package, which needs a two-thirds-majority approval from Finnish MPs, will probably take place sometime next week. (Pekka Vänttinen | EURACTIV.com)

Kerry in Rome: climate crisis needs ‘multiple approach’. “There is not a single thing that can solve the climate crisis. We need a multiple approach,” said US special envoy for climate, John Kerry, who on Thursday met with Italy’s foreign and ecological ministers, as well as with CEOs of the country’s major energy companies in Rome. Read more.

In other news, former EU Commission President Romano Prodi has joined an appeal for the liberalisation of patents on COVID-19 vaccines. The appeal, coordinated by the People’s Vaccine Alliance, has been supported by intellectuals, Nobel laureates and politicians including former French President François Hollande and former Spanish Prime Minister José Luìs Zapatero.

According to Prodi, “liberalisation is necessary because the more developed countries have already expanded their production capacity, but the rest of the world is still completely uncovered in the face of the pandemic and must be helped. When dramatic and global events such as a pandemic occur, an exception to the just and understandable regulation of intellectual property is needed”. (Daniele Lettig | EURACTIV.it)

Spain aims to boost COVID-stricken tourism sector with new campaign. Spanish Tourism Minister Reyes Maroto this week urged foreigners to start preparing for their getaway in Spain now, stressing that the conditions in the country allowed for the resumption of international and domestic travel. Read more.

Major public projects under Greek PM’s control. Greece’s big public projects will now be under the supervision of Prime Minister Kyriakos Mitsotakis, according to a last-minute amendment in a bill that triggered the strong reaction of the opposition. More

Polish right-wing opposition party opposes ‘vaccine passports’. The “green certificates” to be introduced across the EU will “significantly hinder or even make it impossible for tens of millions of people, including at least 10 million Polish citizens to travel in Europe,” Michał Wawer, a lawyer and treasurer of the right-wing Confederation party in opposition, told the Polish parliament, the Sejm, in a conference on Thursday. Read more.

Bulgaria aims for collective immunity within about two months. Bulgaria can achieve collective immunity against COVID-19 within 63 days if the current rate of vaccination is maintained, government health adviser Nikolay Vitanov said on Thursday. Read more.

Romania announces plans to ease restrictions. Romania will lift restrictions gradually, as the vaccination rate picks up and the number of coronavirus infections drops countrywide. As of Saturday (15 May), wearing masks outside will no longer be mandatory, except for markets and fairs, president Klaus Iohannis said. Also, the night curfew will be lifted and shops could return to their usual opening hours. More.