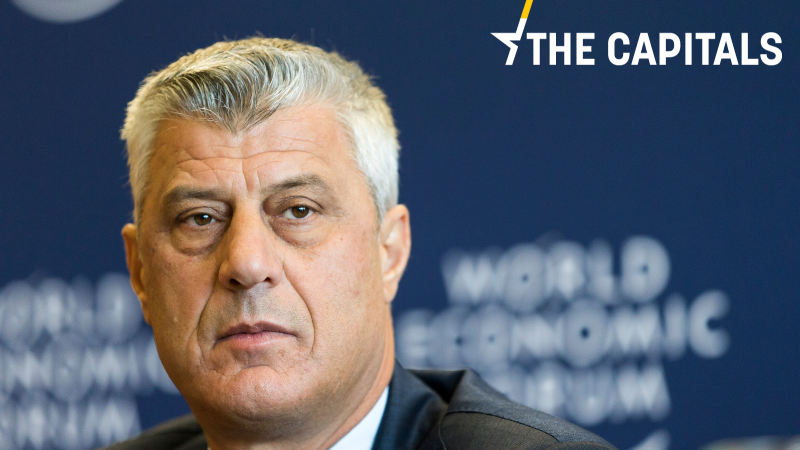 The indictment, which was issued by the Kosovo Special Prosecutor's Office in The Hague on Wednesday (24 June), also indicts Kadri Veseli, until recently Speaker of the Kosovo Assembly, the spokesperson of the Office announced on Wednesday. [EPA-EFE/CYRIL ZINGARO]

Before you start reading today’s edition of the Capitals, feel free to have a look at the article by EURACTIV Germany “Government sets priorities as ‘motor and moderator of Europe’ for German EU Presidency”

Now that many European countries are starting to embrace a ‘new normal’ while others are seeing new infection spikes, make sure you stay up to date with EURACTIV’s comprehensive overview, which is regularly updated with the help of our network of offices and media partners. Also, check our country update pages, such as the one for Belgium and Slovenia.

In today’s edition of the Capitals:

Kosovo’s President Thaci indicted. A ten-count indictment has been filed against Kosovo’s President Hashim Thaci and nine other former separatist fighters, on a range of crimes against humanity and war crimes charges, including murder and torture, by an international court investigating their actions against ethnic Serbs and others during and after Kosovo’s 1998-99 independence war with Serbia.

The indictment, which was issued by the Kosovo Special Prosecutor’s Office in The Hague on Wednesday (24 June), also indicts Kadri Veseli, until recently Speaker of the Kosovo Assembly, the spokesperson of the Office announced on Wednesday. EURACTIV’s Željko Trkanjec has more.

First tracing app notifications. A week after its roll-out, Germany’s so-called ‘Corona-Warn-App’ issued its first push-notification to users that have come into contact with infected people.

On Tuesday (23 June), around 24 users were registered as infected with COVID-19, and that evening, the app sent out notifications to their contacts. Given the decentralised data privacy approach, officials do not know how many people were notified or where they were located.

Users who have received an alert from the app can be tested for COVID-19 for free, even if they aren’t showing symptoms.

Meanwhile, the German cabinet signed off on the country’s programme for the EU Council Presidency. Learn more in the latest from EURACTIV Germany.

Army to shift priorities away from conventional defence. Under the title ‘Our Army’, Austria’s defence ministry will launch a reorganisation of its troops, including a shift in priorities. Rather than preparing for attack by conventional weapons, the army will re-focus on cyber warfare, pandemic mitigation and disaster control. Such scenarios are more likely than an invasion by tanks and aeroplanes, ministry officials told journalists during a background meeting with journalists. (Philipp Grüll | EURACTIV.de)

Phase 4 of deconfinement. Belgium’s National Security Council has agreed the country can go ahead with the next phase of its lockdown measure exit plan from 1 July. Alexandra Brzozowski has the overview what will be allowed under the new rules.

Parliamentarians’ legal immunity under discussion. On Wednesday (24 June) the Finnish parliament entered a debate on what its members can and cannot say in public, after a single quote sparked discussion. EURACTIV’s Pekka Vänttinen reports.

‘Cash for favours’. Prime Minister Boris Johnson’s government is facing a ‘cash for favours’ row after Housing Secretary Robert Jenrick revealed that he had exchanged a series of text messages with a controversial businessman seeking planning approval for a multi-million housing development project. Benjamin Fox has the details.

Migrants test positive for COVID-19 on ‘quarantine ship’. 28 migrants of the 209 currently aboard the Moby Zazà have tested positive for COVID-19. The ferry ship, which was rented by the government from Moby Lines to serve as a so-called ‘quarantine ship’ for migrants during the crisis, accommodates those rescued in international waters by Sea Watch and is currently at anchor near Porto Empedocle, Sicily. More details here.

As of midnight on Tuesday, new restrictive measures imposed by the government on the Lisbon Metropolitan Area came into force, punishing those who disobey social restriction rules with up to one year in prison.

Duda in Washington. Polish President Andrzej Duda landed in Washington on Wednesday (24 June) for a meeting with US President Donald Trump. Nothing new, however, was agreed. Trump repeated that a some US troops (most probably 1,000) will be directed to Poland, but this has been the topic of discussion between the two countries for at least for a year. EURACTIV Poland’s Łukasz Gadzała has more on the talks.

Support for media. Czech media could benefit from a €75 million package as reports by investigative server Neovlini.cz point to the government working on a grant support scheme for Czech media that have suffered from the COVID-19 crisis.

However, while Cultural Minister Lubomír Zaorálek (S&D) later clarified that it was too early to speak about numbers because no concrete proposal had yet been tabled, Finance Minister Alena Schillerova (ALDE) confirmed that the idea of a grant support programme had already been discussed. According to Schillerová, financial support should be distributed to all media outlets, regardless of size. (Aneta Zachová | EURACTIV.cz)

Tense elections ahead. According to the most recent polls conducted for three out of the eleven constituencies in Croatia, the outcome of this summer’s COVID-19 parliamentary elections on 5 July is impossible to call. EURACTIV Croatia’s Tea Trubić Macan looks into why this is the case.

Masks mandatory again. As of Wednesday (24 June), the use of protective masks is again mandatory in enclosed public spaces and on public transport. Along with masks, the government has made hand disinfection mandatory again too, following an increase in the number of coronavirus infections in recent days. According to Health Minister Tomaž Gantar, the measure will be reviewed by the authorities every 14 days, depending on the epidemiological situation in the country. (Zoran Radosavljevic, EURACTIV.com)

Epidemic emergency extended. The Bulgarian government extended its so-called ‘epidemic emergency’ until 15 July. While stricter measures which were in place during the state of emergency won’t be reinstated, travellers from certain countries will still have to undergo quarantine and wearing facemasks in indoor public spaces will remain obligatory, Health Minister Kiril Ananiev explained. Besides, authorities are calling on the general public to remain disciplined and respect social-distancing measures.

In the past two weeks, Bulgaria recorded a spike in new COVID-19 infections with an average of 84 infections recorded between 10 June and 23 June, compared to an average of 26 between 27 May and 9 June. However, the number of COVID-19 tests carried out also increased two-fold and are approximately 2,000 per day now. (Krassen Nikolov | EURACTIV.bg)

Guest of honour at Victory Day Parade in Russia. Serbian President Aleksandar Vučić said on Wednesday (24 June) in Moscow that it was “a great thing” that Russian President Vladimir Putin received him and the President of Uzbekistan, Shavkat Mirziyoyev, in bilateral meetings. EURACTIV Serbia has the story.