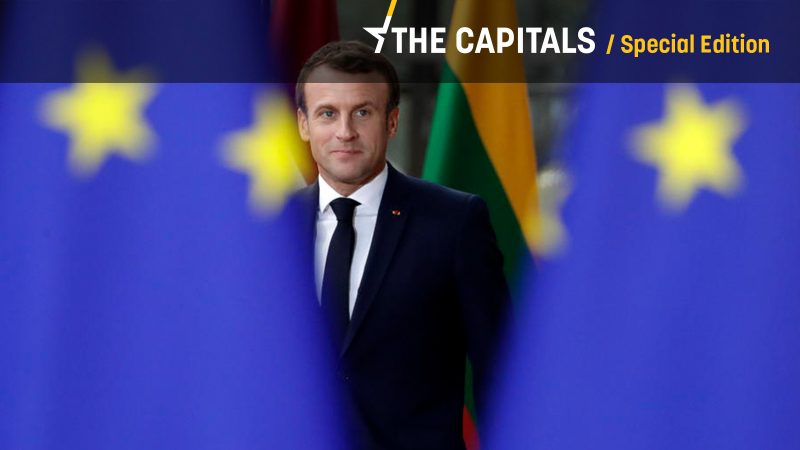 Albania's main opposition leader told EURACTIV: "I am confident that my country has the potential to fulfill all these criteria. Now we need leadership that will realise Albania's full potential". [EPA/STEPHANIE LECOCQ]

Today’s Special Edition of the Capitals will focus on the reactions across Europe regarding the deadlock in opening EU accession talks for North Macedonia and Albania.

At the EU Council summit yesterday, Denmark and the Netherlands joined France in voicing their opposition to opening EU accessions talks with the two Balkan countries. Paris acknowledged the efforts of Skopje, especially following the name change deal with Greece, but in the case of Albania, the three countries voiced concerns about the progress of needed reforms.

EURACTIV’s Georgi Gotev commented on Twitter: “So sad. Today the EU is showing its might against North Macedonia, instead of showing some teeth against Turkey.”

“It also damages the EU’s regional interests,” he told EURACTIV.com, adding, however, that the French veto basically highlights the dilemma, which is also characteristic of other countries.

“On the one hand, there is widespread enlargement fatigue among populations, especially in Western Europe, also due to rule-of-law problems in Poland and Hungary,” he said.

On the other hand, he noted that there is the problem of the Union’s credibility in the Western Balkans as accession talks were promised at a political level, as well as “the danger that these countries are being pushed into the open arms of Russia, China and Turkey if the EU doesn’t show that it is serious about enlargement”.

But he said the French government was the only one that unequivocally decided that the first problem – enlargement fatigue and rule-of-law hangover – is the more important one, and voted accordingly.

“Instead of vetoing the beginning of accession negotiations, member states should insist on a strict application of the criteria for membership during the negotiation process by the European Commission, and devise better instruments to monitor the rule-of-law situation after accession,” Freudenstein said.

EURACTIV.com also contacted MEP Nathalie Loiseau of Renew Europe, who was also Macron’s top candidate in the EU elections. According to Loiseau, Paris had been expressing doubts for a long time. “At a moment when the UK is leaving, when we need to reform the EU and when a number of member states haven’t yet said how they will be financing the next MFF, are we ready to consider expanding our Union? Really?” Loiseau said.

Loiseau emphasised that thousands of Albanians come to France and seek asylum: “How can we open negotiations with Albania?” she wondered.  She said Albanians go to France without a visa and then request to benefit from refugee status, which is often denied to them.

“Either thousands of Albanians deserve refugee status, which in itself questions whether Albania can be an EU candidate. Or human traffickers and the mafia are operating from Albania to Western Europe and encourage illegal migration. Therefore the fight against organised crime needs to be improved in Albania,” the French politician said.

In Paris, sources told EURACTIV.fr that the government insisted that the two countries would one day be part of the EU but that the enlargement process had to be revised before this would even be possible. EURACTIV France reports that the French government’s stance should not come as a surprise considering that Macron has wanted to put a brake on enlargement since the beginning of his mandate.

The latest Eurobarometer has found that 46% of Europeans stand against any further enlargement, while 44% are in favour and 10% had no opinion.

But Macron is the only head of state who expressed this position openly. While Angela Merkel and Dutch PM Mark Rutte share the same idea, they are not that vocal about it. The general position in France is that the EU has been growing too quickly and that some member states are lagging behind.(EURACTIV.FR)

In Tirana, the main opposition Democratic Party of Albania (EPP-affiliated), which has strongly criticised the ruling socialist of corruption, will ask for elections.

Lulzim Basha, the leader of the Democratic Party of Albania, told EURACTIV.com that the decision of the EU Council was “not what we wanted or what he was hoping for”.

“Now all our energy and focus must be to complete our homework. Germany has laid down nine conditions that provide the roadmap for opening accession negotiations. In addition, we must effectively combat crime and corruption and provide opportunities to our citizens, which will help reduce illegal immigration. I am confident that my country has the potential to fulfil all these criteria. Now we need leadership that will realise Albania’s full potential,” the politician from the centre-right said.

Basha accuses the ruling socialist party of high-level corruption. In an interview with EURACTIV last March, he said the judicial reforms put forward by the ruling socialist government of Edi Rama had changed nothing, considering that politicians and organised crime leaders continue to act with impunity.

North Macedonia PM Zoran Zaev has said that the bad news from Brussels could eventually put his pro-EU socialist government in Skopje to the test. An argument in favour of the name change deal with Greece was to start negotiations with the EU. But following these developments, it will be hard for him to stand the pressure of the opposition, which has already asked for early elections. Opposition parties representing ethnic Albanians have said that if there is no date set for which accession talks are to start, snap elections should be held.

The right-wing opposition VMRO DPMNE party took a hardline stance on the name dispute when it was in power, something that negatively affected its relations with the EPP family.

Poland, together with other V4 countries, had strongly supported the accession of both North Macedonia and Albania and the outcome of the discussion did not please Warsaw. Konrad Szymański, Deputy Foreign Minister for EU Affairs, said that “the absence of this green light means that the EU’s influence in the region will decrease, which in turn, means the worsening of European security”.

The V4 governments sent a letter to Donald Tusk urging him to take action and convince Paris. Following the EU affairs minister’s meeting on Tuesday (15 October), Czech Foreign Affairs Minister Tomáš Petříček said that both countries have met their obligations and deserved the launch of accession talks while his Slovak counterpart Miroslav Lajčák called on EU leaders not to be hesitant. “The accession process is the best tool we have to influence developments in the Western Balkans. Why are we tying our own hands?”

Italy and Greece have vital interests in the Balkan region. For Rome, launching the EU accession talks had been a top priority at this EU Council considering the “depressive moment” of the UK’s imminent withdrawal, sources said. In order to support growth in the Balkan region, the sources also said that the EU should keep a close tie with these.

“A similar veto was put by the member states against Turkey in 2005 […] and now look how that turned out,” the source added. Italy pushed for a “clear political message” in favour of a future and definitive accession, EURACTIV has learnt.

Greek PM Kyriakos Mitsotakis (New Democracy-EPP) said that Athens supported the EU path of North Macedonia and Albania provided that they “fully respect the international agreements they have signed, adhere to the rule of law, and of course, respect minority rights”.

There has been no official government comment on France’s “veto” since Athens and Paris have been in close cooperation in the last months on a number of issues. But government sources told EURACTIV.gr that Greece would neither object, under the above conditions, nor push other countries to change their mind.

Leftist opposition Syriza accused Mitsotakis of hypocrisy over his support for North Macedonia, given that when he was in opposition he opposed the name change deal with Skopje. Former PM Alexis Tsipras openly backed North Macedonia to start EU talks while for Albania, he only talked of a roadmap with conditions, especially when it comes to the Greek minority living there.

Bulgarian PM Boyko Borissov described the deadlock as a “historic mistake”, as it would deal a severe blow to the citizens of both countries.

“Nature does not tolerate empty spaces. Some will be interested in these two countries and this will not be good for Bulgaria,” Borissov said, referring to Russia, Turkey and China. He also said that he could not understand how Northern Macedonia could harm the EU since its population could be compared to a large European city.

Although supportive of both countries, the Romanian government did not react after the Council meeting. EURACTIV.ro explained that this is due to the fact that the government lost a confidence vote last week and is in caretaker mode, while PM Viorica Dăncilă had launched her elections campaign for the presidential elections due next month.

The Slovenian government was openly supportive of North Macedonia’s EU path and said that a “package deal” also including Albania was not necessary.

At the EU Council, leaders also discussed the possibility to “decouple” the two countries and launch negotiations with North Macedonia. However, EURACTIV has learnt that countries such as Greece and Italy opposed this.

“North Macedonia deserves to be given the green light,” Slovenian PM Marjan Šarec said. And warned of possible consequences in case of a blockade. “We know that the negotiation process to become a full member is long, very long and nothing happens overnight,” Šarec added.

Commenting on France’s request to change the rules of the EU negotiation process, Croatian PM Andrej Plenković said the rules could not change “while the game is on”.

“The new, revised enlargement methodology, suggested primarily by France, will bring the negotiations with Serbia and Montenegro into a different position than those eventually conducted by North Macedonia and Albania, and we can only imagine what will happen with Bosnia and Herzegovina and Kosovo,” Plenković said.

Asked what the new process should look like, French MEP Loiseau told EURACTIV: “The process needs to be more progressive, reversible and more logical. Many member states agree with that.”

In a letter to the EU leaders, Chairman of the Presidency of BiH Željko Komšić wrote that blocking the accession talks for Skopje and Tirana would send the “wrong message” to Sarajevo: “The work and the difficult decisions we will make, simply do not produce the expected result”. He added that such a decision would also increase Euroscepticism in the region.

The participants of the Belgrade Security Forum (BSF) warned that a new delay would be a bad signal for the entire Western Balkan region.

Former EU foreign minister Catherine Ashton said the EU should reward North Macedonia for the Prespa Agreement, which had been very difficult to reach, and added that the value of the EU was precisely laid therein.

Ivan Vejvoda, a fellow of the Vienna-based Institute for Human Sciences, said it would cost nothing to the EU to open negotiations with the two countries, as a full membership would not happen in the next 7-8 years, even if everything went well.

“If the EU decided to open the negotiations, that would be just news for the seventh page of European newspapers, whereas for the region, it would be a very important message,” Vejvoda said.

US State Secretary Mike Pompeo recently visited North Macedonia and Montenegro. In both visits, Pompeo warned about the risks of Chinese investment in sensitive technologies and called on leaders to take the “right decisions”. He also said Beijing might offer bribes to win some infrastructure deals in the Balkans. Read more: US sets foots in the Balkans amid growing tension with EU