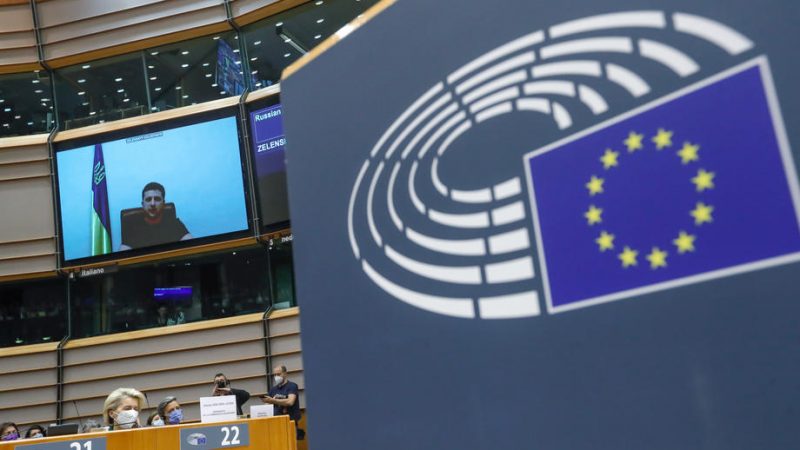 Ukrainian President Volodymyr Zelenskyy’s impassioned plea for his besieged country to join the EU as soon as possible has met cautious support across Europe. But the Western Balkans – home to six membership hopefuls – has remained largely silent.

Albania and North Macedonia have been in the waiting room for years, blocked by issues on corruption, asylum, and most recently, in the case of the latter, a dispute with Sofia over history, culture, and identity.

Enlargement remains a controversial topic, with the European Commission constantly saying it is on the table. The reality is, however, many think it has stalled as there has been virtually no concrete progress in recent years.

As for what Balkan governments think of the potential queue-jumper, the public is none the wiser.

“Let’s not pretend, enlargement is dead, it’s going nowhere,” a diplomat from the region told EURACTIV, also explaining that while it is difficult not to support Ukraine in these dramatic times, it is equally challenging to be in favour of a fast-track procedure for Kyiv given that Western Balkan countries have been standing in line for years.

EURACTIV contacted each country’s European and foreign affairs ministries, but only Montenegro responded.

“Montenegro, as an EU candidate country, wholeheartedly supports the EU enlargement process. We stress that a decision to join the EU depends exclusively on the decision made by the member states,” the short response read.

EURACTIV spoke to several analysts from the region for their views.

Gjergji Vurmo, program director at the Albanian Institute for Democracy and Mediation, agreed that there was some public silence on the issue but argued that Russia’s aggression has actually created momentum for the Balkan’s EU accession hopes.

“EU stakeholders, particularly key member states, are more than ever open and seeking ways to capitalise such momentum and to anchor Western Balkan countries more firmly with the EU.”

He said the EU accession process has suffered from credibility issues in recent years, and it will take courage from EU leaders to make the EU and Western Balkans stronger.

“The war in Ukraine poses immense threats and has exposed a lot that was going on in the Western Balkan region and that civil society and independent media was denouncing for years…Courage [is needed] to recognise the past mistakes, and courage not to shy away from responsibilities,” he adds.

Kristijan Fidanovski, a scholar at Oxford University interested in East European, Balkan and Russian politics, said Ukraine’s wishes should not be a threat to North Macedonia.

“Given Ukraine’s remote membership prospects, it is difficult to see how they could threaten North Macedonia’s accession. In fact, given the EU’s history of simultaneous enlargement into multiple countries, for both logistical and political reasons, Ukraine’s bid can only be beneficial although it is more likely to exercise no impact in either direction,” he told EURACTIV.

He also noted that North Macedonia’s Foreign Minister Bujar Osmani had welcomed the possibility of Ukraine’s EU membership – the first, and so far the only, in the region to do so publicly.

In Brussels on Monday (21 March), Osmani said that both Ukraine and Moldova have a European future but that the process cannot be fast-tracked.

“Promises to a country that they have a European future is very important to incentivise. This promise was given to us in 2003 in Thessaloniki and it was this commitment that led us to the further development of our country and meeting EU criteria,” he said.

“This commitment from the EU to Ukraine will have the same effect,” Osmani added.

However, Fidanovski criticised the unanimous approval of all EU countries required to admit new members as a major hindrance.

“As long as unanimous consent among member states is required, EU enlargement might remain incomplete. Democracy is about the majority’s will, but unanimity means the majority can be taken hostage by a minority of one. Unanimity is the enemy of democracy,” he explains.

Meanwhile, in Serbia, the biggest country in the region, which started accession talks in January 2014, the silence is even more deafening, except for a pro-Russia rally held in the capital Belgrade.

Belgrade is a close ally of Moscow, and the Serbian government has failed to align with EU foreign policy since Russia invaded Ukraine, notably failing to implement any sanctions and refusing to publicly condemn Vladimir Putin and the war.

President Aleksandar Vučić has said that “Serbia will not rush into hostilities because someone asks it to”, despite signals from Brussels that sitting on the fence could harm Belgrade’s accession process.

Florian Bieber, a historian and director at the Centre for Southeast European Studies at the University of Graz, noted there has been little discussion on the matter in Serbia as “EU membership is currently not high on the agenda.” This is furthered by an atmosphere that is “much more pro-Russian than supportive of Ukraine”.

Back in Albania, Vurmo noted that there is a high level of sensitivity around the situation in Ukraine.