Why Putin wants escalation with the West 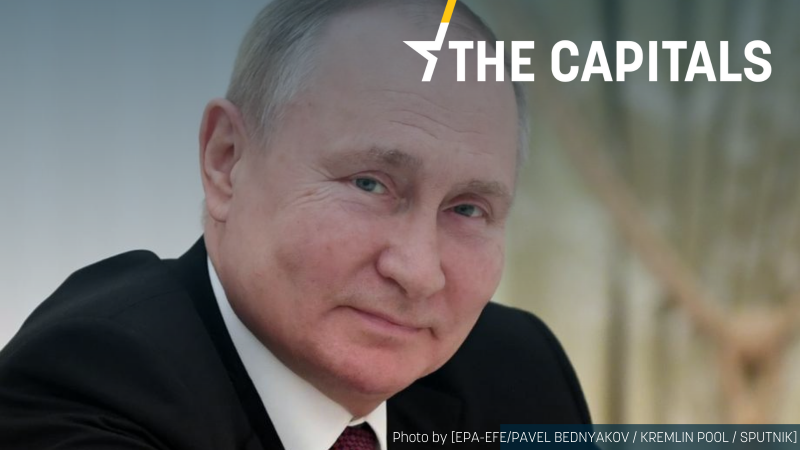 The Ukrainian position is that since Nord Stream 2 is not compliant with EU rules, it should not be certified, the CEO of Ukraine’s gas and oil state company Naftogaz Yuriy Vitrenko told a conference in Brussels on Wednesday (1 December) organised by EURACTIV Bulgaria. [EPA-EFE/PAVEL BEDNYAKOV / KREMLIN POOL / SPUTNIK]

Before you start reading today’s edition of the Capitals, feel free to have a look at the article ‘Stay calm’ EU tells US as Ukraine braces for the worst.

One of Russian President Vladimir Putin’s goals in the escalating conflict with Ukraine is to force Europe and the US to open the Nord Stream 2 gas pipeline, the former head of the Bulgarian State Intelligence Agency Dimo Gyaurov commented in an interview with Nova TV. Meanwhile, EURACTIV’s partner Europe Elects estimates that opinion polling is another reason. Read more.

European citizens divided on nuclear in EU democracy experiment. A citizens’ panel dedicated to the environment, climate change, and health, held in Warsaw in January, found no agreement for a recommendation on nuclear energy, despite being one of the most debated issues. Read more.

Crisis in Ukraine: France calls for a “de-escalation” of tensions. The situation between Russia and Ukraine is “highly volatile”, and it is necessary to avoid “the self-fulfilling character” of the crisis, the Elysée Palace said on Monday. Read more.

UK diplomats return home. Britain has begun withdrawing staff from its embassy in Ukraine amid growing fears of a Russian invasion, with Prime Minister Boris Johnson warning that “the intelligence is pretty gloomy at this point.” Read more.

Brussels could take Portugal to court over 5G rollout delay. Portugal has fallen behind schedule with fifth-generation (5G) networks as it took the country too long to allocate frequencies and it failed to transpose European electronic communications rules, according to the European Court of Auditors (ECA), which expects Brussels will take the country to court. Read more.

Greek army steps in to save government snowstorm fiasco. After a heavy snowstorm paralysed Athens, the Greek army was asked to intervene and help citizens who were trapped in their cars for hours. Despite initial guarantees that the state was prepared, the government has lost control of the situation. Read more.

Uncertainty reigns as presidential race begins. Lawmakers and delegates from regional administrations have gathered in Rome to elect Italy’s president for the next seven years, as Sergio Mattarella’s office is formally due to expire on 3 February. Read the full story.

Spanish government asks coalition partner not to undermine relations with NATO. Left-wing party Unidas Podemos (United We Can) is being asked to show “containment” in its statements on the situation in Ukraine and not jeopardise Spain’s relationship with NATO, government spokesperson Isabel Rodríguez of the ruling socialist party PSOE said on Monday. Read more.

Hungary hires ex-Pegasus spyware lobbyist. The Hungarian government has allegedly hired a Washington DC lobbyist who is linked to Israeli company NSO Group, the creators of  Pegasus spyware, to prepare for potential US sanctions, Telex reported via Direkt36. Read more.

Two men in court for insulting Croatian PM. Two men were taken to court for posting insulting comments below an article on a local news portal announcing a visit by Prime Minister Andrej Plenković to the coastal city of Zadar, local police said on 20 January. According to media reports, one of them wrote on Facebook that the prime minister “and his toadies should be welcomed with rotten eggs”. Read more.

Newcomer throws hat into the ring. Robert Golob, who has been ousted as chairman of energy trader Gen-I, has ended weeks of speculation by announcing he will enter the general election race, a move that polls indicate might upend the balance of political power in the country. Read more.

Albanians protest three-day school closure. Activists in the Albanian capital of Tirana protested the three-day closure of schools due to cold temperatures outside the education ministry, while accusing the government of misspending taxpayer funds. Read more.

One response to “Why Putin wants escalation with the West”