Five people were killed and about 40 injured in London yesterday (22 March) after a car plowed into pedestrians and a suspected Islamist-inspired attacker stabbed a policeman close to Britain’s parliament.

The dead, in what police called a “marauding terrorist attack”, included the assailant and the policeman he stabbed. The other three victims were among those hit by the car as it sped across Westminster Bridge before crashing into railings just outside parliament.

Prime Minister Theresa May condemned the attack as “sick and depraved”.

“The location of this attack was no accident,” she said in a statement outside her 10 Downing Street office late in the evening.

“The terrorist chose to strike at the heart of our capital city, where people of all nationalities, religions and cultures come together to celebrate the values of liberty, democracy and freedom of speech.”

Any attempt to defeat those values through violence was “doomed to failure”, May said.

My thoughts are with London. Together we will never cease to prove that love triumphs over hate, tolerance over fear https://t.co/s77BAS89N7

My thoughts are with the victims of the Westminster attack. Europe stands firm with the UK against terror and ready to help.

Mark Rowley, Britain’s most senior counter-terrorism officer, told reporters the attack started when a car was driven over Westminster Bridge, hitting and injuring members of the public and three police officers.

“A car then crashed near to parliament and at least one man, armed with a knife, continued the attack and tried to enter parliament,” Rowley said.

He said the police’s “fast-paced investigation” was working on the assumption that the attack was “Islamist-related terrorism”. Police believed they knew the identity of the attacker but would not provide details at this stage, he said.

It was the deadliest attack in London since four British Islamists killed 52 commuters and themselves in suicide bombings on the city’s transport system in July 2005, in London’s worst peacetime attack.

Several explosions in London with at least 12 dead and many wounded have put the spectre of terrorism back on European agenda. A group saying it is linked to al Qaeda has claimed to be behind the attacks.

It took place on the first anniversary of attacks by Islamist militants that killed 32 people in Brussels. 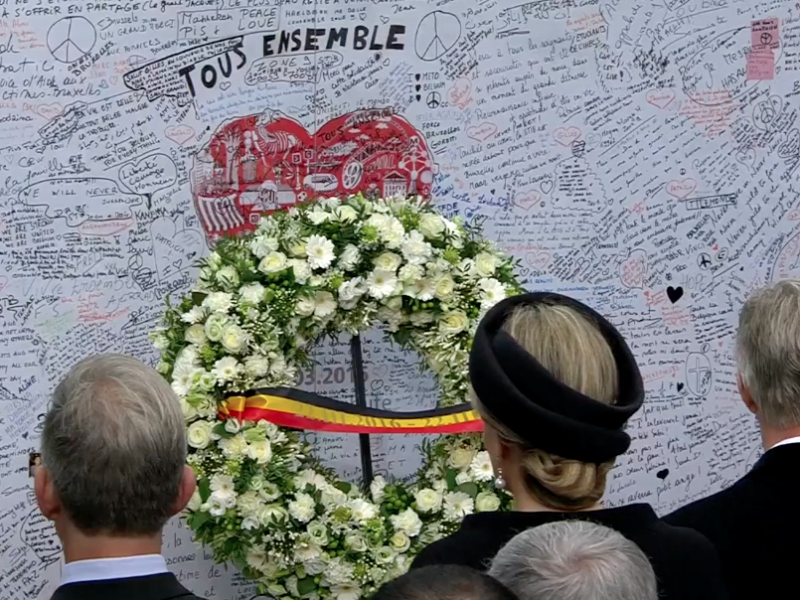 Reuters reporters inside parliament during Wednesday’s attack heard loud bangs and shortly afterwards saw the knifeman and the stabbed policeman lying on the ground in a courtyard within the gates of parliament.

The dead police officer was identified as Keith Palmer, 48, with 15 years of service.

Lawmakers caught up in chaos

A Reuters photographer saw at least a dozen people injured on the bridge. His photographs showed people lying on the ground, some of them bleeding heavily and one under a bus.

A woman was pulled alive, but with serious injuries, from the Thames, the Port of London Authority said. The circumstances of her fall into the river were unknown.

Three French schoolchildren aged 15 or 16 were among those injured in the attack, French officials said.

Several members of parliament and senior officials were caught up in the chaos. Tobias Ellwood, a junior foreign office minister, was pictured attempting to resuscitate a man lying unconscious, reported to be the stabbed policeman.

London Mayor Sadiq Khan said there would be additional police officers on the city streets to keep Londoners and visitors safe.

“We stand together in the face of those who seek to harm us and destroy our way of life. We always have, and we always will. Londoners will never be cowed by terrorism,” he said.

Londoners will never be cowed by terrorism. pic.twitter.com/LTLhgZ7OLQ

Parliament’s lower House of Commons, which was in session at the time, was suspended and lawmakers were asked to stay inside the building for several hours.

May said parliament would convene as normal today in a sign that the attack would not disrupt life in the capital.

However, a visit by Queen Elizabeth II to officially open the new headquarters of London’s police force, which had been planned for today, was postponed “in light of today’s events”, Buckingham Palace said.

In a telephone call with May, US President Donald Trump offered Britain the full cooperation and support of the United States, the White House said. US Secretary of State Rex Tillerson condemned the attack as “horrific acts of violence”.

Spoke to U.K. Prime Minister Theresa May today to offer condolences on the terrorist attack in London. She is strong and doing very well.

My thoughts are with all those affected by the horrific attack at the very heart of #London. #NATO stands united against terrorism.

French President François Hollande sent a message of “solidarity” and “support to the British people” saying France could identify with their pain after the attack, in which three French high school students were also wounded.

The lights on the Eiffel Tower have been switched off as a mark of respect to the victims of the #LondonAttack pic.twitter.com/eWmqPuZgUA

“France, which has been hit so hard in recent times, knows what the British people are suffering today,” he said.

And Prime Minister Bernard Cazeneuve tweeted: “Solidarity with our British friends, horribly attacked, full support for the injured French students, their families and their friends.”

‘No signs of life’

Eyewitnesses described scenes of panic during the attack.

“I just saw a car go out of control and just go into pedestrians on the bridge,” said Bernadette Kerrigan, who had been on a tour bus on the bridge, in an interview with Sky News.

“As we were going across the bridge, we saw people lying on the floor, they were obviously injured. I saw about 10 people maybe. And then the emergency services started to arrive. Everyone was just running everywhere.”

Former Polish Foreign Minister Radoslaw Sikorski, who witnessed the attack from a taxi as he crossed the bridge, said he saw five victims and made a video of the scene.

A car on Westminster Bridge has just mowed down at least 5 people. pic.twitter.com/tdCR9I0NgJ

“I heard something that sounded like a small car crash. Then I looked out of the window and saw that there was one person lying on the asphalt,” he told Reuters.

Journalist Quentin Letts of the Daily Mail newspaper told LBC radio that he had witnessed the stabbing of the policeman and the shooting of the assailant from his office in the parliament building.

“He (the assailant) ran in through the open gates… He set about one of the policemen with what looked like a stick,” Letts said.

“The policeman fell over on the ground and it was quite horrible to watch and then having done that, he disengaged and ran toward the House of Commons entrance used by MPs and got about 20 yards or so when two plain-clothed guys with guns shot him.”

In Edinburgh, the Scottish parliament suspended a planned debate and vote on independence as the news from London came in.

Britain is on its second-highest alert level of “severe” meaning an attack by militants is considered highly likely.

The most recent deadly attack in London to be treated as a terrorist incident was in May 2013, when two British Islamists stabbed to death soldier Lee Rigby on a street.

One response to “World leaders stand with Britain after London attack”