Alarming backsliding in press and media freedom in Europe 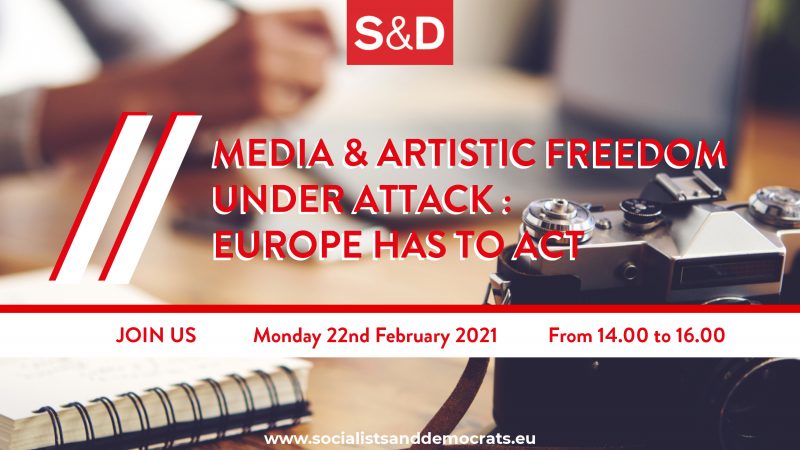 We all were shocked seeing the blank TV screens and blank front pages of newspapers in Poland last week, in protest against the government’s plan to impose new, numbing taxes on independent media outlets. Also, last week, the popular and last independent radio in Hungary, Klubradio, was forced to go off air under the pretext of absurd offence. And this week we are witnessing Slovenia’s Prime Minister, Janez Janša, harrasing a Brussels journalist on social media, because he did not like her reporting about… the downturn in press freedom in Slovenia. These are only the latest examples of assault on media freedom in Europe.

It is known that the transition period following the collapse of the Iron Curtain proved challenging to many ex-communist countries when it came to managing national politics, but also media institutions, and keeping the balance between fading out the “old ways” of doing journalism and implementing the free way of doing it. It took several years until people could trust the media again. Gradually, it became an essential part of their lives, as it should be. The people best equipped to make the right decisions about the future of their country are informed citizens.

30 years later, media freedom and media pluralism are under assault in several European countries, with illiberal governments tightening curbs not only on independent journalism, but also opposition, open debate and society. The pioneer and today’s model autocrat is Victor Orbán, Prime Minister of Hungary, who has taken control of all public media and pushed private outlets into the arms of his friends and business cronies. As a result, in some parts of the country, Hungarians no longer have access to independent information.

Orbán has become a dangerous inspiration for others. After taking control of public media and transforming them into propaganda tools, the Polish government is now going after independent media outlets with a new tax, even stronger than the one in Hungary. Poland’s state-owned PKN Orlen energy group also announced in December that it had become the majority shareholder of Polish regional and local newspapers.

Bulgaria is also facing very worrying developments, with journalists complaining about extensive political interference in the media. There too, we are witnessing the capture and concentration of the media, now in the hands of a few corrupt politicians. Moreover, Bulgaria remains since years at the bottom of all international rankings when it comes to media freedom. With its current 111th place in the World Free Press Index Bulgaria seems nowadays closer to Congo and Afghanistan than any other EU Member State.
Croatia has also seen a high number of lawsuits and harassment campaigns against journalists investigating corruption, organised crime or war crimes.

The most alarming case today is perhaps Slovenia because it is experiencing an extremely swift downturn in press and media freedom after Janez Janša (Slovenian Democratic Party/EPP) returned to power. Not only is Janša leading a fight on Twitter to attack, harass and undermine journalists by accusing them of spreading lies, his government has slashed funds for the Slovenian Press Agency (STA), jeopardising its ability to perform the public service it is required by law.

The press is not alone in facing attacks. Since March 2020, the Slovenian government has been blocking the majority of state budget transfers intended for The Slovenian Film Centre, a public agency of Slovenia. The film industry is already under enormous pressure because of the COVID 19 pandemic, but these actions heighten the economic strain on the different organisations involved in film production and dissemination. In Hungary, the government has recently installed a government-appointed board at the University of Theatre and Film Arts, having already increased its control over the country’s theatres through a new law passed in 2019. And the list – unfortunately – goes on.

In Europe, we believe in freedom. Freedom of speech, freedom of thought and freedom of the press are all more than just beliefs. These freedoms are enshrined in the Treaties that have built the EU. In the last decade, the EU has been passive and reluctant to respond to systemic attacks on freedom of the press. Now it’s time to turn the tables.

We call on the European Commission to reclaim its role as guardian of the Treaties and to use all possible tools at its disposal to support independent journalism and media pluralism. Be they competition, internal market rules or mechanisms to protect and strengthen the rule of law, or more funds to support local or investigative reporting – all our weapons should be on the table. Because this is a war we have to win.

Today, the fight for media and artistic freedom must be at the top of European Parliament’s agenda, as the only EU institution elected by citizens. On Monday we are bringing together and opening the floor to journalists, politicians and people working in the arts sector, to discuss how to promote media pluralism and support independent journalists in the EU.  Join us!
Media and Artistic Freedom Under Attack – Europe Has To Act!