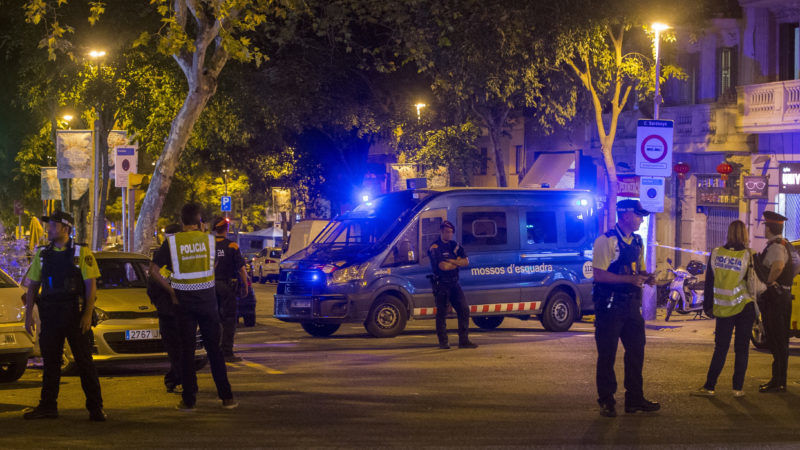 Catalonian policemen watch all around the Sagrada Familia after a terrorist false alarm caused by a van parked near the monument in Barcelona, Spain, 12 September 2017. [Quique Garcia/EPA]

We are living in extremely complex times. Cities are directly affected by global challenges such as the terrorist threats, increasing inequality and climate change but they do not have the resources they need to tackle them effectively.

Ada Colau is mayor of Barcelona.

The regrettable terrorist attack in Barcelona on 17 August showed tragically how serious and daunting the common challenges we face are: guaranteeing citizens’ safety without limiting their rights and freedoms by clearly opting for social cohesion and a culture of peace and participation as the founding values of our urban security policies. In order to tackle such challenges, local authorities must think and act in a coordinated manner and with a global vision.

The European Forum for Urban Security’s (Efus) international conference, in November, is part of this approach. For three days, our city will gather representatives of some 800 local and regional authorities as well as experts and professionals from all over Europe who will analyse the present urban security challenges and policies. Furthermore, it is a historic event since the conference will commemorate the 30th anniversary of the creation of Efus in Barcelona by its then-Mayor Pasqual Maragall and other prominent political leaders.

A European network gathering some 250 local and regional authorities from 16 countries, Efus is a world reference on urban security issues. It aims to build a space for dialogue, reflection and cooperation among local authorities and practitioners for the sharing of experiences and good practices. It is also a space for political debate where local authorities, whatever their political affiliation, can adopt a position on the local and supralocal security policies they need.

Throughout its 30-year history, Efus managed to create among its member local authorities a shared culture of urban security based on cooperation and mutual understanding. Since its creation, the Barcelona City Council has actively contributed to the development of this network of cities and regional authorities. We are proud to host Efus’ conference on the occasion of this anniversary.

Efus promotes an integral and multi-disciplinary approach to urban security. It also considers that a sustainable urban security is only possible if based on social cohesion and an environment that gives citizens the opportunity to grow socially.

All the conference’s work spaces have been conceived to be very concrete and participatory. Attendees will have the opportunity to learn about and share good practices from various European cities on a range of urban security issues, such as the prevention of violence, insecurity in public spaces, the effects of global crime on the urban environment, etc.

Furthermore, in all the conference’s work spaces and events, attendees will reflect on the best strategies to co-produce security policies, whether by encouraging civil society participation or improving institutional cooperation between public and private stakeholders. Indeed, the present security challenges call for joined efforts and innovative responses that must be much more multi-faceted than in the past.

The Barcelona conference will conclude with the adoption of a political manifesto, which will renew the declaration of principles that is adopted at each of Efus’ international conferences. It will express the common political stance of cities regarding urban security challenges and policies in Europe.

Titled “Security, Democracy and Cities: Co-producing Urban Security Policies”, the conference is a key event where urban security knowledge, practices and current technologies will be assessed. The key word is co-producing: I invite you to take part in this event in order to decide together, with both a local and a European perspective, on the future direction of security policies. The best public policies are those that are designed in cooperation with the shared knowledge of those who implement them on a daily basis.