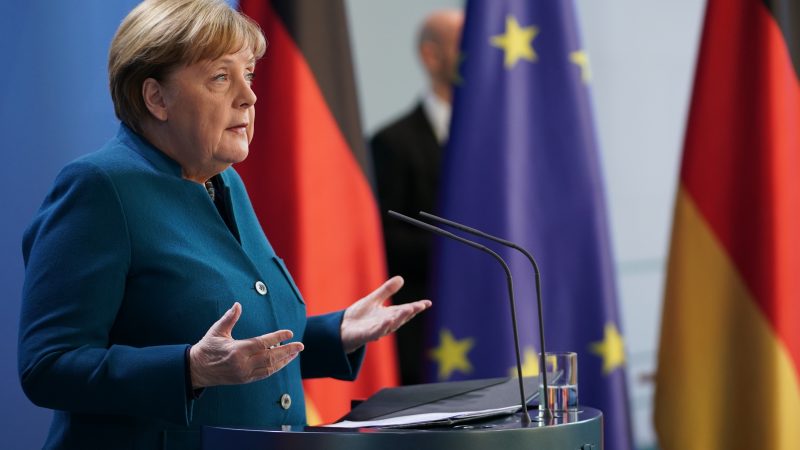 The coronavirus pandemic has increased citizens’ confidence in their governments. In Germany, this extraordinary situation has made the desire for political renewal, which many had been longing for, fall into oblivion – Angela Merkel is once again perceived as an anchor of stability and pragmatism in this crisis, writes Kenneth Stiller.

The ability to lead through major crises indeed is Merkel’s greatest strength. Simultaneously, the crisis reveals her greatest weaknesses: blatant lack of decisiveness and political will.

Although Angela Merkel knows how to lead through crises, she will not be able to lead Europe out of crises.

Already shaken by several crises, the EU will require a clear vision for Europe’s political future as well as fundamental political decisions to cope with the coronavirus pandemic. Angela Merkel, however, has repeatedly demonstrated that she is not willing to make constructive and bold decisions.

If there is one guiding principle in Merkel’s political style, it is demoscopic opportunism as described by Habermas: a fundamentally apolitical idea. Merkel prioritises her own popularity over the long-term consequences of her political decisions.

Her political agenda is not informed by any political paradigm or basic conviction. Merkel’s political style intentionally depoliticised, turned politics into an administrative act and, precisely for this reason, was a suitable style for Germany during the sleepy 2000s and the peaks of several crises of the 2010s.

Increasing politicisation and the urgent need for fundamental political decisions on the European level, partly because decisions were deferred in the past, inevitably will either put an end to Angela Merkel’s leadership or inflict major damage upon the European project.

Two crises – the eurozone crisis and the crisis of liberal democracy – have defined Angela Merkel’s term as German Chancellor. Although they have been defused, these crises remain unresolved and provide evidence of Merkel’s political style and unwillingness to make fundamental political decisions.

On the European level, the event that most shaped Angela Merkel’s political career is the euro crisis. Merkel played a decisive role in turning a financial crisis paired with the flawed architecture of the eurozone into a political crisis as well as a crisis of solidarity.

When she chose to deliberately frame measures to decouple the German and French banking systems from the tumbling Greek state as a rescue package for Greece, she strengthened her own position at the cost of deep scars across Europe and a lasting drawback for the European project.

Can a few Southern European Covid-19 patients that are receiving treatment in German hospitals be perceived as an expression of European solidarity if Germany, and rightly so, is blamed for a decade of austerity policies that entailed massive cuts in healthcare funding in Italy, Spain and Greece?

Ultimately, it was Mario Draghi who prevented the implosion of the euro zone. Far-reaching reforms of the monetary union failed to materialise, with Merkel refusing to even discuss possible instruments such as Eurobonds, a European unemployment reinsurance scheme or further steps towards fiscal union.

Worse, after Emmanuel Macron drew a sketch of the future of Europe in his Sorbonne speech in 2017, Germany and Angela Merkel did not even bother to make a counterproposal, but remained silent at a moment when a window of opportunity to shape the future of Europe opened.

Even during a global crisis such as the COVID-19 pandemic, Merkel resorts to instruments created to address asymmetrical shocks rather than discussing the prospect of mutualising debt.

Given that Merkel prefers merely addressing the fallout of crises rather than their underlying structural causes, it is also due to Angela Merkel’s leadership style that the process of European integration is in limbo and, above all, aimless.

Angela Merkel’s leadership style has significantly contributed to the crisis of democracy and populism, which is likely to shape her political legacy.

Given the EU’s dual fragile architecture, inadequacies in the decision-making process at EU level can vastly damage politics and democratic discourse in its member states – which is precisely what happened in the course of the euro crisis and vastly exacerbated the crisis of liberal democracy.

“There is no alternative.” Merkel’s paradigm during the euro crisis was nothing less than an attack on democratic principles. It reflects the dispensability of democratic deliberation, as well as the idea that political decisions do not have to assert themselves in a competition of ideas.

No mantra more accurately represents Angela Merkel’s chancellorship and left citizens behind with a dangerous impression of disenfranchisement.

In following this technocratic approach, Merkel intentionally reduced the scope for political action and suppressed necessary deliberations on the future of the eurozone, handing control over such policies over to unelected institutions such as the ECB.

This technocratic leadership style is in many ways similar to the newly emerging populism. It is true that while populists appeal to voters’ emotions, technocrats claim to offer rational and validated solutions. Both populism and technocracy, however, reject and democratic pluralism and parliamentary democracy.

When Merkel spoke of a “lack of alternatives”, she delegitimised dissenting political ideas in the same way Donald Trump and Viktor Orban do when claiming to act on behalf of the national interest and the peoples’ will.

Technocracy and populism are two sides of the same coin, namely an authoritarian exercise of political power. The way from one to the other is not far, as we can see in Europe nowadays.

The coronavirus pandemic is confronting the EU with fundamental political choices, with scars of past but not overcome crises reopening. If the EU cannot agree on solutions to the crises that are acceptable to all member states, the European project will meet rejection even from the traditionally europhile citizens of Southern Europe.

This time, there must be an alternative, an explicit signal showing that the EU lives up to the promise of European solidarity. It should be clear that when longing for courageous and fundamental political decisions, Europe cannot hope for Angela Merkel’s leadership – or Germany’s, for that matter.

After all, the political zeitgeist has left Merkel’s era behind long since.