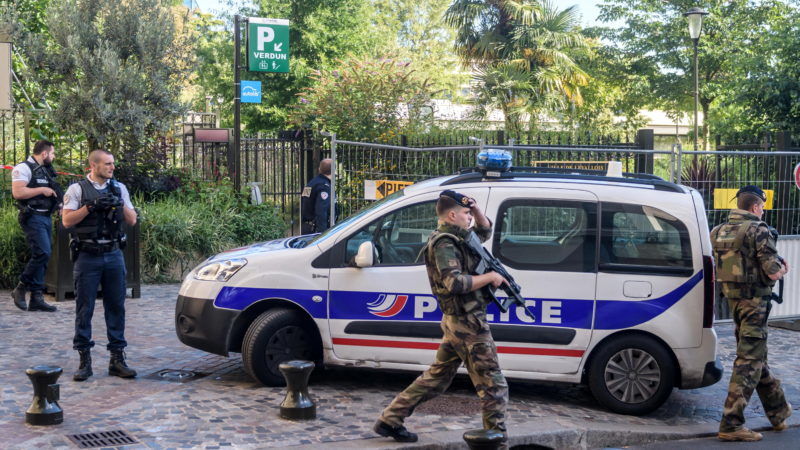 Police and military officers set up a security perimeter near the site where six soldiers of the anti-terrorism Sentinelle operation were hit by a car in Levallois-Perret, near Paris, France, 09 August 2017. [Christophe Petit Tesson/EPA]

It is only a few weeks since the Barcelona terrorist attack. The professionalism of emergency responders was great but in the aftermath of a tragedy, it is our obligation to examine what could be improved and do better, writes Gary Machado.

Barcelona proved what we already knew: reliable information is crucial. In a large-scale emergency, lack of official instructions, fake news and rumours are a threat to rescue operations and the safety of people. To address this challenge, we need mechanisms allowing authorities to inform people about an ongoing incident and what they should do to be safe. In other words, we need an effective reverse -112.

In most European countries, the only way to alert people is through sirens, a system dating back to WWII. To understand how it works, think of this: You’re watching an old war movie. A village is under attack and a figure – usually heroic – runs to the central square to ring the church bells and alert the others. In the EU of 2017, we have a similar system – a bit more advanced, but not really.

An effective solution is not as complicated as one might think. In its simplest form, authorities can use telephone networks to alert people directly on their phones. With almost everyone in Europe having a mobile phone, it makes perfect sense. And the technology is already available, just look at cell broadcast and localised SMS.

This is not about one country. The problem is pan-European: Paris, Brussels, Nice, Munich, Berlin, Stockholm, Manchester, London, Barcelona… people were not informed in time. The result? Increased panic and accelerated propagation of rumours and misinformation. In Nice, a system was in place – but did not work when needed. So, who’s next? How many attacks until we act?

The truth is, progress is close to zero. You might think the countries are adapting but that’s not the case. Let me introduce you to France of 2017: The budget of the French authorities for alerting people via telephone networks is €1,78 million. The budget for updating the siren system? Over €35 million.

Only a national competence? The eternal diversion of responsibility

When one of the attacks hit close to home, some in the EU bubble were quick to blame the Belgian authorities for insufficient actions. Conveniently, the EU’s responsibility was non-existent. After all, “this is a national competence.” People in Brussels have heard this one-too-many times. To be fair, public warning is a national competence – and should remain so. Does this mean the EU has no role to play? Not by a long shot.

The EU has competence over telecommunications, a portfolio that includes public warning. It is within this context that the EU can and must provide added value. And even within the EU institutions, many know this.

A few years later, another opportunity appeared: the Telecoms Single Market proposal. The text was amended by the European Parliament to guarantee telephone networks can be used to alert the population. The amendment was dropped in the inter-institutional negotiations.

This brings us to today, 10 years later and nothing done.

Winter is coming – but it doesn’t have to

We are currently at a crossroads with an important choice ahead. Our institutions are debating the European Electronic Communications Code (EECC), a massive legislative file that will update the Union’s telecoms rules. ITRE is the text’s lead Committee in the European Parliament, with IMCO being responsible for the part of universal service and consumer protection.

On 4 September, IMCO will vote to include a reverse-112 system in the EECC proposal. The ball will once again be in the court of the European Commission and the Council.

So what does the future hold?

On one hand, history shows that, if anything, our institutions are consistent: the European Parliament supports public warning. The Council is reluctant – to say it mildly. The European Commission says it is not an EU competence; an argument, I hope, sufficiently debunked.

On the other, we live in a reality where Europe faces unprecedented public safety challenges. Recent attacks are painful for all of us but they also prove beyond any doubt that we need to act now – and I think our institutions see that.

In a crisis, Europeans have the right to have access to reliable information; and we have the responsibility to make it a reality. The EU needs to do its part, facilitate the work of member states and work with them to progress. In the end, if saving lives doesn’t motivate us, I’m not sure what will.