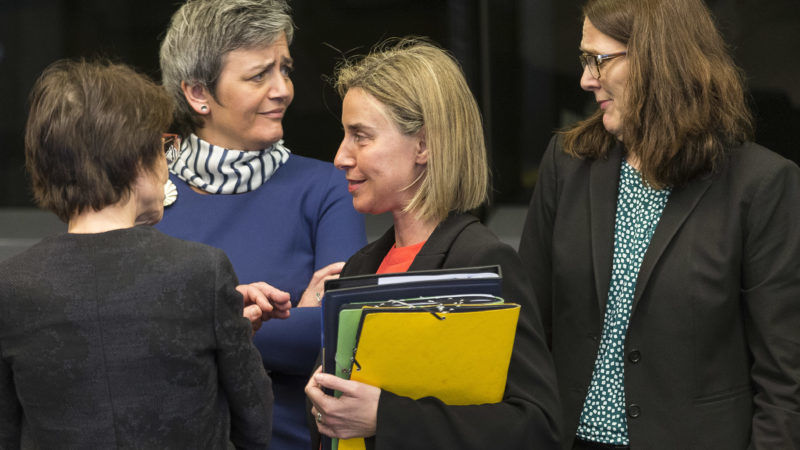 Commissioners Thyssen, Vestager, Mogherini and Malmström represent their respective countries at the highest political level. But there is still work to be done. [European Commission]

Take the offensive comment by Polish MEP Janusz Korwin-Mikke who finds it acceptable that women earn less because they “have smaller brains,” or the parliamentary debates in several eastern European states where there is a clear regressive tendency in terms of women’s rights protection.

Examples like these reinforce old gender roles and lead to a decrease in women’s legal rights to choose how to live their lives. While these threats to women have triggered a new level of engagement among civil society actors in Europe, the stories also highlight that the EU is far from achieving a gender equal society.

These impressions are supported by the European Institute for Gender Equality (EIGE)’s 2017 edition of its Gender Equality Index (GEI) showing how progress has practically ground to a halt in the past decade.

This context poses specific challenges to women in the policy spheres in Brussels who are polyglot, professional, well-educated, and well-connected. Many of these women are invested in seeing more equality when it comes to decision making positions, and in ensuring women’s influence.

They are well-positioned to counter the above mentioned trends – leading by example, shaping policy making and raising awareness. They are striving for excellence in their professional lives, and are often balancing professional demands with taking care of others.

Yet, they operate in traditional, hierarchical and typically male environments and alone find it difficult to tackle the disproportional gender barriers that these environments still put to them. With more collective action and amplification of voices, these women in Brussels could play a decisive role in raising critical issues around women, and gender equality in the policy environment and building a new type of leadership based on dialogue, compassion and collaboration.

Their engagement could lead to ripple effects in sectors and regions that will lead to achieving gender equality throughout Europe.

Despite this potential for decisive action, the myriad of institutions and groups working on women’s rights and gender equality are not united, and are frequently difficult to identify, let alone to organise.

There are currently over 50 initiatives, networks, associations and organisations in ‘international’ Brussels originating from different sectors, or nationalities, or applying specific tactics to redress the gender balance according to a recent publication, “Women Leading the Way in Brussels”.

They are very different in terms of visibility, recognition, operation, membership, partisanship, and focus. How could one strengthen their efforts through greater interactions and coordination across initiatives, enhancing sustainable impact?

At a recent gathering of around 40 representatives of some of these organisations, and networks, participants acknowledged that a common vision among the different actors was missing, that there was a lack of communication and connection points across these networks, sectors, and  institutions.

They also acknowledged that there is not enough data that would allow more analysis on the impact of diversity in the different sectors,  and that ties between gender and other diversity angles (disabilities, LGBTQI, ethnic or regional origins, religious or political affiliations) had not been developed.

This discussion showed a big appetite among the different stakeholders to continue some form of exchanges in the future, though it was less evident what form it should take. One initiative discussed was the International Gender Champions (IGC).

Set up already in Geneva, New York and Vienna, it is an attempt to bring more coordinated approaches to tackle obstacles to gender equality, and kick-start an inclusive movement for change.

This gathering served as a first step in the direction of finding an entry points to amplify the collective effectiveness of these groups, actors and networks in Brussels. But questions remain.

How to preserve and acknowledge all the individual work they have done so far? How to avoid competition between existing initiatives, especially when it comes to access to resources and visibility?

How to reinforce collective impact while respecting the diversity of actors and missions? Diversity and inclusion has yet to come more naturally to the (policy) circles in Brussels. It is also recognised that men can also be critical allies to addressing gender equality.

While the UN initiative “He for She,” for example, already has ambassadors here in town (i.e. Commissioner Neven Mimica, NATO Secretary General Stoltenberg), it is less evident whether these “feminist men” actually walk the talk.

It remains to be seen if the ICG idea can have a different impact or whether new – unique – adaptations of this or other models make more sense in the rich reality of international Brussels’ actors.

The EU has the opportunity to be a consistent driver of change on the global stage – and also change practices closer to home. Including more women in shaping politics is an essential stepping stone in changing mentalities, achieving gender equality and providing better policy solutions. Ultimately it is about deepening democracy in the policy shaping process that allows Europe to be a truly global power.