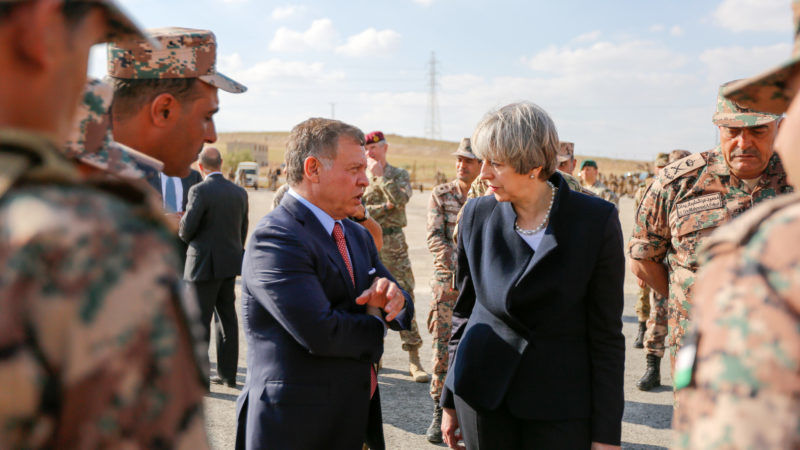 King Abdullah II of Jordan (L) speaking with British Prime Minster Theresa May (R) during their visit to a military base, near Amman. Jordan, 03 April. May is in the country to boost diplomatic ties in the region following Brexit. [Shehabi Mohammed/EPA/Jordanian Royal Palace]

Theresa May’s decision to link future security cooperation with Europe to the outcome of a trade deal is damaging for the Brexit talks. On the contrary, a deal on security could set a positive tone for the very difficult trade negotiations, argues Rem Korteweg.

Rem Korteweg is head of European External Policy at the Clingendael Institute.

The most important issue in the upcoming Brexit talks is the future trade relationship between the UK and the European Union. But London is concerned it may not get as good a deal as it wants. And so, to improve the British negotiating position, Prime Minister Theresa May has put Britain’s contribution to European security on the table. An unwise move.

The UK wants a free trade deal with the EU. But in those negotiations, the EU and the UK are not equal partners. Around 44% of British exports go to the EU, whereas just 8% of European exports go to the UK. The 27 EU member states form a trading bloc with a common market and a customs union, and the European Commission negotiates on behalf of 440 million people, while London speaks for 60 million.

But on security issues it is the member states, not the EU institutions, that are the key players. And Theresa May, drawing on her previous experience as home secretary,  knows that the UK has played a pivotal role in European efforts to track foreign fighters, find criminals and terrorists, and enforce financial sanctions against Russia or Iran. In her Article 50 letter she has linked future security cooperation to the outcome of the trade talks. This veiled threat is a gamble; she hopes that the EU member states will push the Commission to soften its stance in the free trade discussions.

It is remarkable that in the week after the terrorist attack in Westminster the British would put their counter terrorism commitments on the negotiating table. The UK clearly benefits from such cooperation.

So a degree of bluff cannot be ruled out. Despite this, it would have been better if London had disconnected security cooperation from market access. A more constructive approach would have generated goodwill with its EU partners; a sensible move if the EU holds the whip-hand in the trade talks. Nor does May’s position bring an agreement on security cooperation any closer. It is difficult to grant a favour to someone who wields threats.

On security cooperation, there will be a number of difficult issues to resolve. For example, will the UK, as a non-EU member state, seek to remain part of Europol, the EU law enforcement agency that is currently headed by a Briton? And how to manage a future relationship between the UK and the European Court of Justice? The court plays a central role in judicial oversight of European data transfers, which impacts law enforcement cooperation. But the Court’s broad authority was one of the main reasons why Brexiteers wanted to leave the Union.

Beyond counterterrorism, Brexit also has consequences for Britain’s role in European security and defence policy. The UK is the second largest military power in Europe, holds a permanent seat on the Security Council and is a nuclear power. The British diplomatic service also has an extensive, global network. Although the UK has never been an enthusiastic supporter of European defence integration, the EU should aim to keep the UK close on security and defence matters. If not, the credibility and effectiveness of European foreign policy will lose out.

A deal on EU security and defence cooperation, however, is equally sensible for the UK. Britain is a major contributor to two ongoing EU missions: Operation Atalanta in the Gulf of Aden and Operation Althea in the Balkans. Besides, the EU — more than NATO — actively promotes stability in areas of British interest, such as West Africa and the Sahel.

It is also in Britain’s interests to remain involved in all relevant security discussions in Europe. Particularly now that Europe’s periphery looks increasingly fragile and there are doubts about President Donald Trump’s support for NATO.

A few simple guidelines could prevent defence cooperation from becoming a bone of contention in the Brexit talks. London is oversensitive to suggestions that the EU is working towards a European army. For example, some in Whitehall see the EU proposal to set up a small civil-military planning capability as a direct challenge to duplicate existing NATO structures. There is no such competition, but the unfortunate suggestion that it would be called an ‘operational headquarters’ has led the British to suspect the worst.

The British defence minister said in September that he would veto this proposal as long as the UK was a member of the EU, which some in the EU27 saw as sabotage. The solution is simple: EU, don’t call it an operational headquarters. And in this delicate period of complex negotiations, the EU should keep a lid on proposals when they are bound to annoy the British. And to the British: don’t see in every EU proposal a threat to NATO.

In order to accommodate London, the EU27 should be open to creative ideas how to involve the British in the decision-making process on, for example, new military missions or new defence capability initiatives. But that also means that the UK should not undermine the EU’s role on security matters.

A sensible agreement on security cooperation could have oiled the wheels in the upcoming Brexit negotiations; now the security dimension risks putting sand into them. Don’t turn the British contribution to Europe’s security into a bargaining chip. No-one benefits from a trade-off between tariffs and tanks.

6 responses to “In Brexit talks, don’t bargain over security”