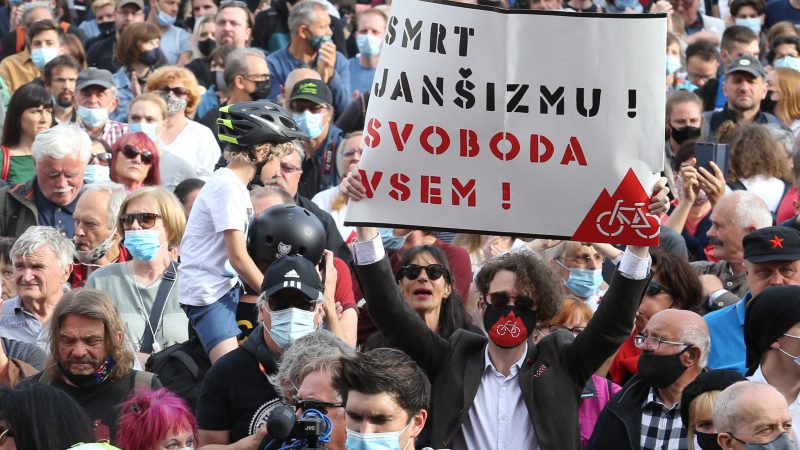 Slovenian citizens protest against Prime Minister Janez Jansa outside the Government building in Ljubljana, Slovenia, 28 May 2021. The placard reads "Death to Jansism, Freedom for all". [EPA-EFE/Tomi Lombar]

Prime Minister Janez Janša, who is under fire in Western media as Slovenia takes over the rotating presidency of the Council of the European Union, may be clumsy on Twitter but he is not an autocrat, writes Žiga Turk.

Žiga Turk, a professor, two-time minister in Slovenia’s government and former secretary-general of the Reflection Group about the Future of Europe, writes about growth, innovation, technology, sustainable development, creativity.

On 1 July, Slovenia is taking over the rotating presidency of the Council of the European Union, under the government of Prime Minister Janez Janša. When I wrote a column last year, the narrative to discredit his government as another illiberal democracy was already visible.

The plan succeeded in the sense that several international media have uncritically bought the story peddled by the Slovenian opposition and, to be honest, helped by some activities of Janša on Twitter. And the plan failed.

In spite of unprecedented pressures from the entire Slovenian media conglomerate – the political opposition, the civil society, the street protesters, and various institutions – that threw everything, including the kitchen sink, at this government, Janša is still standing. With his shoulders back.

In the cited column, I explained the sources of discontent of the Slovenian left. Since 1945, one network has been accustomed to the spoils of power. And when that is taken away, this is not accepted as a normal feature of democracy, but as a shock.

Withdrawal symptoms included regular writing of “open letters” by the intelligentsia, street protests by those not so literate – even when strictest pandemic measures were in place – all kinds of legitimate and illegitimate motions in the parliament, and, last but not least, undermining COVID measures whenever possible.

The government that is sometimes pictured as autocratic, even as fascist, responded by issuing a few parking tickets to those who violated COVID measures. Well, not parking tickets but something of similar legal stature.

There were no scenes of police fighting the demonstrators, as in some other EU member states. Just the very minimal interventions needed to keep order. Mass gatherings were not allowed under COVID measures but effectively this was not enforced.

The worst that happened to protesters was Janša attacking the demonstrators. On Twitter, not with a water cannon.

Similarly, the media cried foul before anything happened. There is a mutual animosity between the media (practically all of the media) and Janša. They attack him on TV and in the written press.

And he fights back where he can – on Twitter. Not as politely as one would expect from a prime minister and sometimes not with due respect for the office of an MEP or a Human Rights Commissioner.

Anonymous trolls on social media then take it up a notch.

Indeed, the journalists in Slovenia are under attack. Some people on Twitter tell them what they think.

This is shocking to those used to enjoying the privileges of a one-party state. It is also shocking to someone used to editorial oversight of Letters to the editor. But is, unfortunately, quite common in the mud wrestling of contemporary social media. I know, I am on the receiving end often.

Putting Twitter aside, the government did not get a single journalist fired, it did not close down any media. It entered a stupid, mutually fueled fight with the Slovenian Press Agency.

Mutual, because Janša needs to show resolve to his right-wing base, and the agency enjoys being a martyr in what they see as a fight for freedom of the press. But no one was fired, everyone is getting their salary, journalists report freely, there was zero change in the editorial policy.

The government tried to pass a new media law that would take some funds away from national TV and distribute them to other struggling media outlets, but there was not enough support for that in the coalition.

As I wrote a year ago, Janša is weak, he does not have the massive support to be like Viktor Orbán, even if he wishes so. The coalition support is simply not there for divisive decisions.

On the other hand, the government is surprisingly strong and resilient in other matters. It is passing through parliament laws and measures so that Slovenia experienced one of the lowest rates of unemployment due to COVID.

The government’s economic measures resulted in one of the fastest economic rebounds in the EU. The country is rapidly modernising infrastructure, upgrading the social security system, making the country more attractive to foreign investment, speeding up digitalisation.

There may be a lot of right-wing smoke and mirrors but the actual policies and actual events in material reality are centrist.

Such will also be, I guess, the presidency of the European Council. In reality. There will be outrage, too, of course, we live the outrage culture.

The former socialist countries have more antibodies to the ideologies now creeping into Europe under the label of wokeness. We remember the political correctness from the old system, we see some parallels with the current competitions in righteous posturing and know where it leads.

Definitively not to solving any real problems faced by the Union. Europe has huge challenges to tackle. Keeping an eye on the ball and focusing on what matters is what Slovenia with Janša can promise.