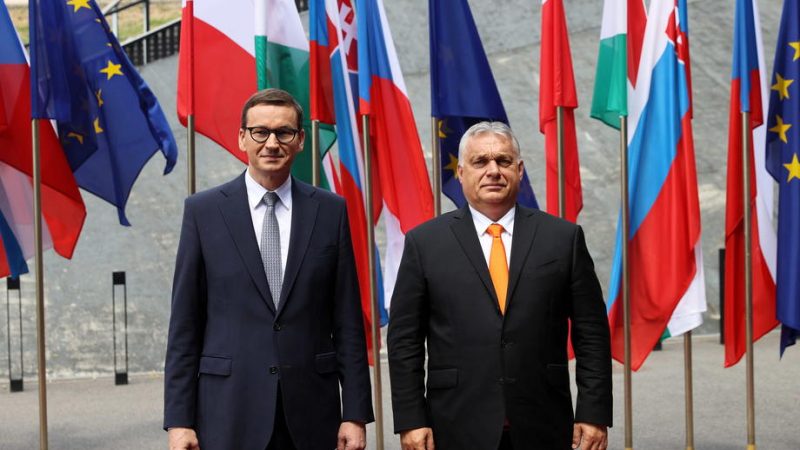 Polish Prime Minister Mateusz Morawiecki (L) and Prime Minister of Hungary Viktor Orban (R) during the welcome before the Summit of Heads of Government of the Visegrad Group in Katowice, Poland, 30 June 2021. [EPA-EFE/ANDRZEJ GRYGIEL POLAND OUT]

The reelection of Viktor Orbán to a fifth term as Prime Minister of Hungary should push the European Commission to isolate his autocratic government and break up Europe’s authoritarian alliance between Hungary and Poland.

Tom Theuns is Assistant Professor of Political Theory and European Politics at the Institute of Political Science in Leiden and Associate Researcher at the Centre for European Studies and Comparative Politics at Sciences Po Paris.

Jakub Jaraczewski is the Research Coordinator at Democracy Reporting International, a Berlin-based NGO. He conducts research and analysis on the rule of law and human rights in Europe, working on the re:constitution programme.

Yesterday, Hungary re-elected Viktor Orbán, the public enemy number one of democracy in the EU. His party, Fidesz, and their satellite party, the Christian Democratic People’s Party, have secured a supermajority in the Hungarian National Assembly.

The united opposition, led by Péter Márki-Zay failed despite a ‘forced marriage’ of all six main opposition parties, from the socialists to the greens and the formerly far-right conservative party Jobbik.

But this wasn’t a democratic election because Hungary is no longer a democracy. Under Orbán’s leadership, Fidesz has dismantled judicial independence, captured the Hungarian media, vilified refugees and LGBT people, and installed a corrupt kleptocracy. All the while it was being enabled by massive subsidies from the EU funds.

While political freedoms remain largely unscathed, the democratic playing field in Hungary is heavily skewed. These elections were free but not fair.

Fidesz gerrymandered electoral districts in its favour. In addition, it has used its overwhelming dominance in the Hungarian media landscape to promote Orbán and vilify (or ignore) the opposition. As if that wasn’t enough, Fidesz has also significantly surpassed the legal limit for campaign financing.

The war in Ukraine also played into the hands of the government. Orbán presented Fidesz as the only force keeping Hungary away from war and cast the opposition as dangerous warmongers hell-bent on a bloody confrontation with Russia. The very same Russia that has increasingly warmed up to Hungary in the recent decade, seeing an opportunity for swaying an EU Member State toward Moscow’s foreign policy goals.

Voting has been made easier for a conservative diaspora in neighbouring countries – over 1m of which were fast-tracked for citizenship under the Fidesz government – but not for (generally more liberal) Hungarian ex-pats. While no opposition parties or politicians were barred from running, the odds were stacked high in favour of the ruling party.

The united opposition was fighting an uphill battle. It is noteworthy that they lost, but how serious a challenge they could still mount to Orbán’s electoral autocracy. How close they came.

For years, Hungary and Poland have formed an authoritarian alliance in their attacks on democracy and the rule of law. Where unanimity was required – as in the EU’s most serious sanction mechanism under Article 7 of the Treaty on European Union – Hungary and Poland protected one another.

But cracks in this relationship have started to show. Poland has been one of the most vital voices favouring heavy sanctions on Russia and proactive support of Ukraine. Hungary has been much more reticent. Until it became politically impossible, Orbán was a vocal supporter of Putin.

The Hungarian government’s ambivalence towards Russia is causing their relationship with the Polish government to cool. Polish President Duda spoke against Orbán’s unwillingness to impose stronger sanctions on Russia, saying this policy would be “very costly”.

Another strain on the Polish-Hungarian friendship was inflicted when Orbán has called out the OSCE election monitoring mission for “systematic political bias” before inviting ultra-conservative Polish-Catholic think-tank Ordo Iuris for a rival observation mission. Poland chairs the OSCE currently, and such a move by Orbán was a slap in the face of Polish diplomacy.

These tensions present an opportunity to break up Europe’s authoritarian alliance. Many see Fidesz and Orbán as becoming toxic, even radioactive, for Poland’s conservative ruling coalition. Maintaining the image of tough defenders of Poland and Ukraine against Russian aggression will be hard for PiS when they were shaking hands with borderline pro-Russian Hungarian politicos just a few weeks ago.

The European Commission should use the occasion of Orbán’s reelection to move forward with the Rule of Law conditionality mechanism against Hungary. European Union money cannot continue to finance Hungarian kleptocracy. At the same time, the Commission should publicly state that they do not intend to use the conditionality regulation against Poland, thus hopefully driving a wedge between the two allies on the rule of law.

There’s a solid substantive case for doing so. The EU funds are at risk in Hungary disproportionately higher than in Poland. Fidesz and Orban are using EU money to fill their pockets, while PiS and Kaczyński are keeping away from that. Poland has a very good track record of spending EU funds, with little corruption or graft.

This means that using the rule of law conditionality against Poland would, in any case, be a tall order. Building a credible link between the attack on the independence of the judiciary and the risk to EU funds would be possible but not bulletproof.

For sure, pressure against Poland on the rule of law should not be let up entirely. The recovery funds should not be released until Poland has implemented the rulings of the Court of Justice of the European Union on judicial independence. But for strategic, political and legal reasons, the Commission should stop treating Poland and Hungary as similar cases.

Going after Hungary and giving Poland more slack would signal that Poland’s unity with the rest of the EU and its risk-taking vis-á-vis Russia warrant a reward. At the same time, the Hungarian government’s cowardice and disunity deserve it to be further isolated.

Breaking up the EU’s authoritarian alliance will not be easy. However toxic their relationship might become, Hungary and Poland still depend on each other in voting in the Council. But as the 2023 parliamentary elections in Poland are approaching, continued pressure on the Hungarian-Polish link might be just enough to break it.

After next year’s vote, Poland might be able to return to respecting EU values, and Hungary will most likely continue on its autocratic path. Therefore, the EU should start working towards isolating Hungary now to minimise the damage.