The Brief – A French presidency to remember 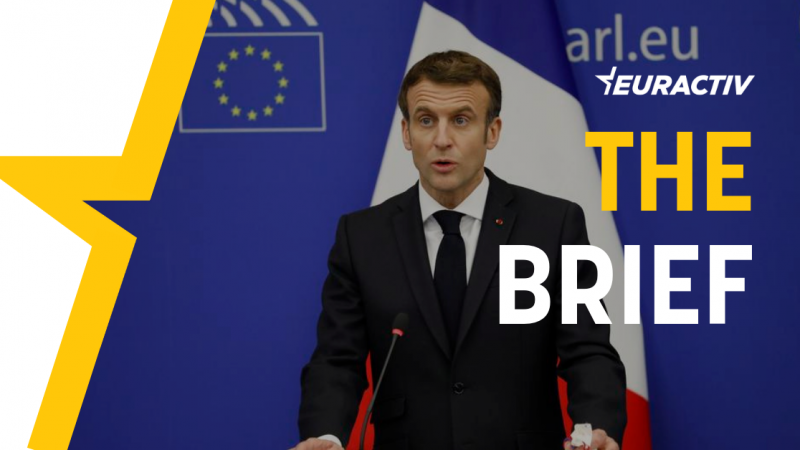 While France, as befits a true European heavyweight, undoubtedly hoped to leave its mark with a highly ambitious EU Council presidency, journalists may be left with vivid and not-so-great memories of these six months unless Paris shows a little more consideration for their work.

Dozens and dozens of French journalists and reporters from across the bloc were crammed together at the European Parliament in Strasbourg last week as Emmanuel Macron came to discuss the priorities of the French presidency with MEPs.

While many were initially happy to be attending this biannual rendez-vous in one of Europe’s top institutions, their enthusiasm quickly faded as the day progressed.

After several hours of statements by Macron and feisty exchanges with French MEPs, the journalists rushed to a press conference, eager to pose their questions and get some answers.

There, Macron, accompanied by the newly-elected President of the Parliament, Roberta Metsola, spoke for precisely two minutes and 32 seconds without taking a single question from the audience. This infuriated journalists, who left the room in protest.

“After more than five hours of Macron in the plenary, having Metsola and him repeat press statements with no questions is a waste of time. Designed only to ensure the new EP president gets her photo op with Macron with the nice flags”, tweeted The Financial Times’ Mehreen Khan, who undoubtedly spoke on behalf of many others.

All this was to the delight of the far-left challenger in France’s April presidential election, Jean-Luc Mélenchon. He had also made the trip to Strasbourg and was more than happy to field questions from the press with flexibility and willingness.

Ignoring journalists is a risky business for any government. For the French executive, this was a missed opportunity to make up for the lack of knowledge and popularity of Brussels, which the French have been asking for.

But it is crucial for the French government to get its act together, and quickly, since this is not the first time journalists have been given the cold shoulder.

The week before, in Brest, the meetings of EU27 Defence and Foreign affairs ministers were already described as a “rocky start”. Many attendees, not just journalists, found themselves de facto excluded due to working groups, non-papers, and other communications being conducted or distributed only in French.

While it was expected that the French Presidency would be very French, no one had anticipated it would reach this level.

If Emmanuel Macron genuinely wants to put the EU on top of his agenda and wishes to claim the successes he may be achieving at the helm of the Council, there is no reason why he should not facilitate the work of the media keen to give it attention.

Journalists are not asking for favours but for opportunities to report on what they believe to be relevant – European issues.

Ukraine is committed to seeking a diplomatic solution to the current tension with Russia, its ambassador to Japan, Sergiy Korsunsky, said on Wednesday (26 January), adding that he saw little chance of all-out war, although there might be smaller conflicts.

The Ukrainian Foreign Ministry summoned Croatian Ambassador Anica Džamić on Wednesday following Croatian President Zoran Milanović’s scathing comments about Ukraine, including that it is one of the most corrupt countries in the world and does not belong in NATO.

The European Commission presented on Wednesday a draft declaration on digital rights and principles which will complement the digital targets Europe aims to reach by 2030.

The Italian centre-right coalition has proposed their first shortlist of candidates for the presidential elections, keeping their best cards in their pocket as the political deadlock continues. Italy’s main political parties are still to agree on a candidate to replace Sergio Mattarella in the Quirinal Palace, the seat of the Italian head of state with the first two days of voting ending with a great majority of blank ballots.

After days of absence from the public, Greek Prime Minister Kyriakos Mitsotakis apologised on Wednesday (26 January) for the mismanagement of a snowstorm that paralysed the country this week and left citizens trapped in cars for more than twenty hours.

French President Emmanuel Macron, who is building suspense over whether he will run for a second term, has a vision of “refounding” a more sovereign Europe. With less than three months to go before the presidential elections on 10 and 24 April, the founder of La République en Marche (LREM) has not yet officially confirmed or denied whether he will enter the race.

Last but not least, don’t miss our Green Brief and Health Brief today!

One response to “The Brief – A French presidency to remember”