The Brief – EU, are you blind? 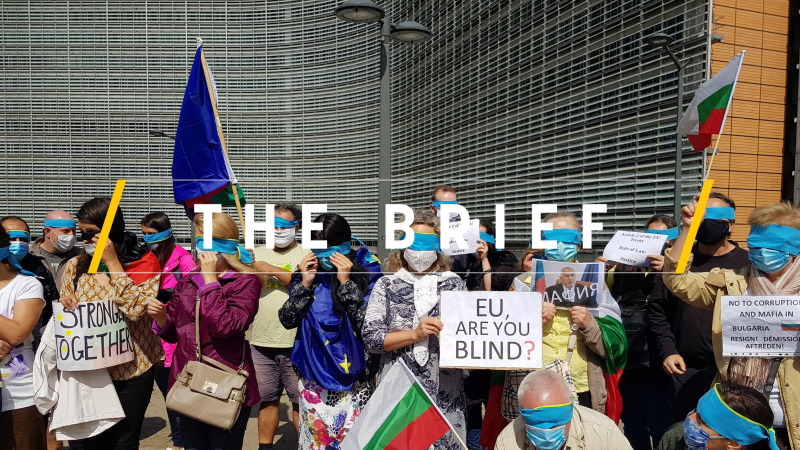 Thursday (27 August) will mark the 50th day since Bulgarians took to the streets to demand the resignation of Prime Minister Boyko Borissov and chief prosecutor Ivan Geshev. So far, the EU has been silent about protests in its poorest member country.

Every evening, people,  mostly youngsters, gather to protest in many big cities across Bulgaria. Some came from abroad, as coronavirus helped to bring the Bulgarian diaspora back home. Many have never voted before.

They say they are ashamed at having Borissov as prime minister, especially since a series of photos, voice recordings and videos were made public, illustrating what most people suspected,  that Borissov rules the country like a mafia boss, with the help of a chief prosecutor who looks very much like him, but is younger and more arrogant.

It is not by chance that Bulgaria remains the EU’s poorest country. It has a lot of potential but thus far, this potential has been drained by the mafia for its own gains.

During these 50 days, the people in the streets have achieved a miracle of sorts: fear is disappearing in Bulgaria. Switch on any radio or TV station and you’ll hear commentaries from people in the streets or from analysts. Many of them say Borissov is a Mafioso and his time is over. Loud and clear.

Borissov was on the cusp of resigning but found an excuse not to step down because his junior coalition partners, the United Patriots, did not agree. This far-right formation knows it stands no chance to enter the Bulgarian parliament in case of new elections.

To buy time, instead of resigning, Borissov said he would initiate a process of changing the constitution. Funnily enough, in Belarus, the long-reigning President Alexander Lukashenko has made the same proposal.

The EU has found itself in the uncomfortable position of supporting the people of Belarus against Lukashenko while keeping its eyes wide shut in the face of protests against the mafia in Bulgaria, embodied by Borissov and Geshev.

On Sunday, Bulgarians protested at the Schuman roundabout in Brussels.

Passers-by were asking: “Are you from Belarus?”

“No, we’re from Bulgaria,” was the answer. “It’s an EU country but we have the same problem, we want fair elections now.”.

The EU will make no sense at the international scene unless it finds the courage to solve its internal problems with dignity.

There is no need for treaty change: all it takes is for the EPP President Donald Tusk, a decent politician who also looks like an honest man, to stop supporting GERB, Borissov’s party. GERB is EPP-affiliated but is actually a populist force flirting with the far-right, while there are other forces in Bulgaria genuinely adhering to the EPP ideology.

GERB will be dwarfed in the next election and Democratic Bulgaria, the country’s dissident EPP force, is likely to get a big boost. The EU’s political families are expected to be helpful in dealing with the internal problems of its members, though it’s not always been the case recently.

But the writing on the wall is clear: if Tusk doesn’t find the courage, history will overrule him.

Slovakia has been careful not to overreact to the controversial arrest of a Slovak man at the Charleroi airport in February 2018, which resulted in his death, but the issue continues to be an embarrassment for the Belgian authorities after fresh video footage recently emerged.

Embattled EU trade commissioner Phil Hogan was fighting to keep his title, as the Irish government said he breached a trio of coronavirus guidelines on a trip to the Republic to attend a parliamentary golf society dinner.

In the first edition of “Do you speak cohesion?” podcast we are breaking down the elements of the cohesion policy or regional development funds, providing a better understanding over the EU’s support mechanism.

EU foreign ministers meet physically in Berlin for on informal meeting under the EU’s Council presidency on Turkey, Belarus, Russia and strategic implications of COVID-19.