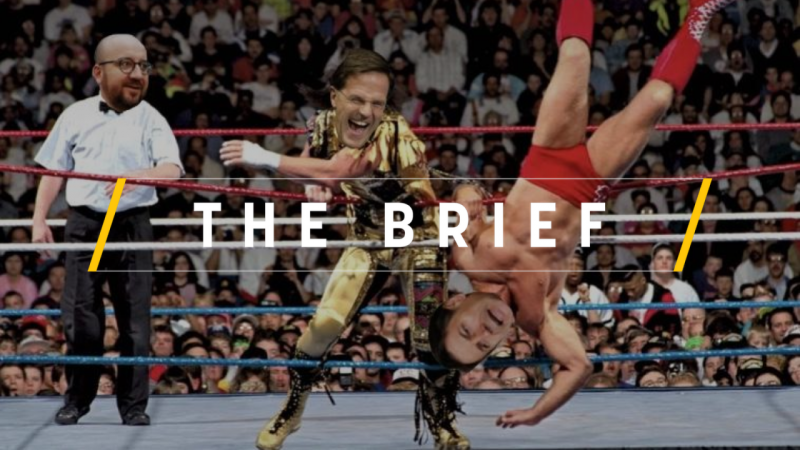 Europe’s premier political entertainment extravaganza, EUCO Wrestlemania, kicked off on Friday for a full weekend of fighting. Here’s the play-by-play account of the still ongoing summer slam in Brussels.

The biggest superstars in the European Council universe descended on the Belgian capital to contest the MFF (multiannual financial framework) and RRF (recovery and resilience fund) titles, in a long awaited showdown.

Plucky Baltic fighter Gitanas Nauseda – new to the industry – kicked off proceedings by calling out Bad Vlad Putin for a grudge match but the Russian was a no-show. That was followed by a handicap match between Turkey and the tag-team of Greece and Cyprus, which ended without result.

The real action started when the Frugal World Order faced off against the Andalousian Samurais. There was a lot of bad blood in the match, as the old Benelux stable found itself split by ‘Surly’ Mark Rutte’s alliance with the FWO.

New fan-favourite Sophie Wilmès won over the crowd by finding time for the kids in Place Jourdan and leaning hard into the frites gimmick but the Samurais were still overpowered.

The match went on so long that Scarfman Bettel had to head back to Luxembourg. In a dramatic move, he delegated his seat to Wilmès instead of Rutte, suggesting that the Benelux dynamic may have permanently shifted.

After the tete-a-tetes it was time for the melee, a 28-competitor bout for supremacy over the EUCO, refereed by retired PM Charles ‘Jobs, Jobs, Jobs’ Michel. Twisted alliances, along both ideological and political lines meant it was impossible to call.

The FWO stayed loyal to each other through the early stages – even bringing ‘Stone Cold’ Sanna Marin onboard – but cracks started to appear as the Legion of Zoom – made up of the Great Manu and the Phenom herself, Angela Merkel – chipped away at their alliance.

Last year’s surprise Spitzenslam winner, UVDL – who won after knocking out Big Timm and Queen Maggie right before the final bell – failed in her title defence and was almost totally absent throughout the whole show.

Even ‘the next big thing’ Pedro Sanchéz was missing in action, despite being the number one contender to claim the vacated UK title belt. His own Iberian entourage were left to wonder what the big man was even doing in the fight.

In a brief battle of the EUCO villains, Mark Rutte and Viktor the Diktator went head to head exchanging some sweet burns and a touch of sarcasm. Rutte tried to hit his Rule of Law finisher on the Hungarian but it was wide of the mark.

The Great Manu didn’t like the way the rumble was going so threatened to bring in his chopper and leave but no one was buying it, so the French fighter squared up to Kurz the Hurtz instead, laying the smackdown on the FWO man’s manners.

Bam Bam Borissov was unable to use his immense size to his advantage and Andrej the Giant, who was coming off the back of an underwhelming six-month-long EUCO title run, also failed to impress.

Most of the countries still pushing for €500 billion in grants were thrown over the top rope and in the end Michel gifted the fight to the FWO, proposing a smaller allocation of subsidies. The battle wasn’t over though, as the combatants took a pause for lunch.

The main event was a winner-takes-all championship bout between Rutte – representing the FWO – and Giuseppe the Count – fighting on behalf of the rest of EUCO. There was no love lost between the two, as the Dutch and South have a bitter legacy of trading barbs.

Hours after the bell rang, pundits wondered if the contest would ever end, given how equally matched they were. Rutte deployed some cutting jokes and booked himself into a hotel for the evening, while the Count went full unbridled aggression, insisting he was the ‘People’s Champ’.

The Apulian Bull wouldn’t let up and it gradually looked only a matter of time before Rutte tapped out. But then long-time nemesis Mr Populist, Thierry Baudet, interfered from ringside, taunting the Dutchman that he’d submit like he always does.

That appeared to embolden Rutte, who stood firm against the onslaught even as the crowd turned further against him, laying a powerful Rebate Adjustment move on the Count. After a few more hours of fierce negotiations, the two fighters were still inseparable.

Michel, under the watchful eye of the Phenom Merkel – who has a EUCO winning streak of 131-0 to protect – eventually counted both of the exhausted competitors out and stipulated that the Royal Rumble would have to resume in order to decide the titles…

The Council proper is due to resume after 6pm and there are glimmers of hope that an agreement in principle could be near. Angela Merkel says it is possible and Emmanuel Macron insists a “spirit of compromise” will seal a deal. Here’s where things stood this morning.

Did you miss any of the action over the weekend? Check out our video roundup.

Away from EUCO, the Commission’s decision to task its research centre with appraising nuclear energy’s sustainability credentials has been criticised, while gas grid operators have unveiled a plan to roll out 23,000 km of hydrogen pipelines across much of Europe.

Serbian Prime Minister Ana Brnabić writes in this editorial how her country has changed over the years. President Aleksandar Vučić is pursuing a boyhood dream of his, even as the coronavirus outbreak continues: he is training to become a basketball coach.

The Organization for Security and Cooperation in Europe (OSCE) is facing somewhat of a crisis after failing to fill some top posts. Here is the full story.

Keep checking the site for updates on an agreement, if and when it should come. Tuesday is national day in Belgium, so regular service resumes Wednesday.