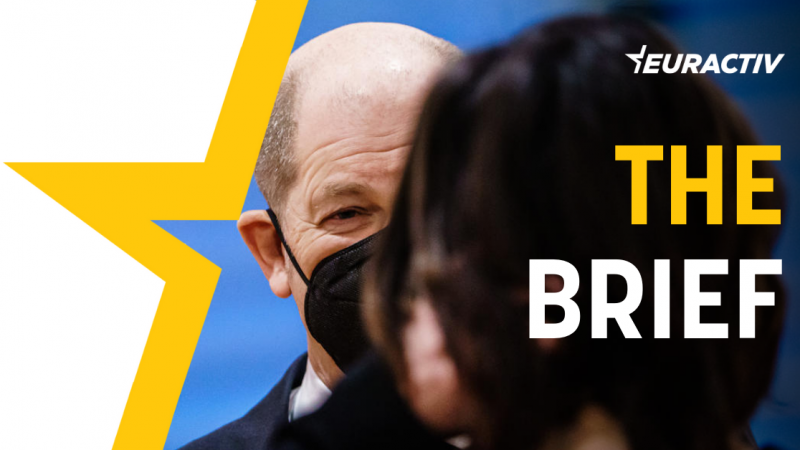 In the midst of contentious debates around mandatory vaccines and possible arms shipments to Ukraine, German Chancellor Olaf Scholz seems to wish he could borrow Harry Potter’s cloak of invisibility. But his strategy of flying under the radar might be a deathly hallow.

So far, the stoical Social Democrat has managed to build success based on a simple motto: Those who do not act at all do nothing wrong.

But while this strategy might have served him well during an election campaign that saw his opponents stagger from one blunder to another, being the chancellor of the world’s fourth-largest economy is not exactly a role that lends itself to invisibility.

Domestically, the new “traffic light” government has been plagued by the mandatory vaccine conundrum ever since it took office in December. While the Omicron wave put the issue high on the agenda, a vaccine obligation risks being met with an angry backlash.

Scholz’s solution to save face was to avoid the issue. Rather than decide on an official government line, the executive is leaving the matter up to the Bundestag, the German parliament.

While it is standard practice for ethically difficult questions to be presented to MPs so they can vote freely without party whipping, Scholz’ government is going even further. The cabinet will not table a legislative proposal on the matter but will leave it to parliamentary groups to draft a relevant law, should they so choose.

No matter how the Bundestag decides in the end, the impression Germans are left with is that their chancellor chickens out as soon as the going gets tough.

Perhaps more consequentially, Scholz has also brought his politics of camouflage to the world stage.

Faced with Russian sabre-rattling at the Ukrainian border, Germany may have had the chance to step up and show strength and unity with its Western partners. But yet again, Scholz has remained decidedly non-committal on key questions.

Is Germany ready to provide defensive weapons to Ukraine? If necessary, can the EU and the US count on Germany to leverage the Nord Stream 2 pipeline for sanctions?

The answer is a resounding ‘maybe’.

“Obviously”, the chancellor would halt the launch of Nord Stream 2 in case of Russian aggression against Ukraine, because this is the “only rational” decision, Sigmar Gabriel, a former Social Democrat vice-chancellor, told broadcaster Deutschlandfunk in a recent interview, even though Scholz himself has made somewhat contradictory statements.

Whether one chooses to follow Gabriel’s reasoning or not, needing a mind reader to understand the government’s position on key issues is not an ideal situation.

The damage left by Scholz’s flip-flopping goes beyond cracks in the German coalition’s unity and it risks alienating its allies in Europe and globally. European and NATO partners, and not least Ukraine itself, need to know whether they can count on Germany.

It also risks signalling to Putin that the West is not standing united – and thus encouraging his ambitions.

Faced with concerns of a global scale, the leader of the EU’s most populous country would be well-advised to stop relying on magic tricks.

As the battle over including fossil gas and nuclear energy as “transitional” investments towards a sustainable Europe continues, Fridays for Future activists Luisa Neubauer and Dominika Lasota spoke to EURACTIV about why they think both energy sources should be kept out of the EU sustainable finance taxonomy.

In central Asia, the nations of Kazakhstan, Uzbekistan and Kyrgyzstan suffered electrical power outages in major cities on Tuesday, according to authorities and residents, after a major power line in Kazakhstan was disconnected.

EU ministers and European Parliament members are stepping up coordinated EU action to counteract foreign interference, with most fingers pointing to Moscow and Beijing.

The NATO alliance will make all decisions on possible movement of troops amid the ongoing Russia-Ukraine crisis, US Deputy national security adviser Jonathan Finer said on Tuesday.

The EU will continue to train the Libyan coastguard to control migration and border security, and it sees ‘some positive signs’ despite the postponement of elections in the war-torn North African state last month.

The COVID-19 pandemic has shown the weakness of international organisations and the need for a stronger transatlantic partnership for a fair global recovery, the EU’s chief diplomat Josep Borrell said during a Foundation for European Progressive Studies event.

As the football industry continues to grapple with the financial implications of the pandemic, the Dutch beer maker Heineken has reignited the fight against plastic in UK leagues.

Last but not least, check out our Transport Brief for a roundup of weekly news.

One response to “The Brief — Germany’s phantom chancellor”