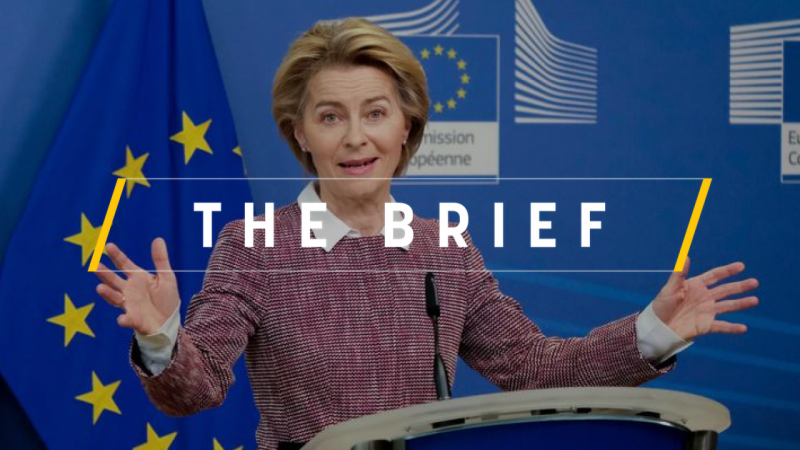 Ursula von der Leyen may well have opened up a Pandora’s Box when it comes to her institution’s role and its relationship with governments, after an ill-judged foray into national politics at the weekend. Surely the Commission president has more important matters to attend to?

With that tagline, it could have been a video to encourage tourists to visit the country. Instead, it was designed to drum up support for the party ahead of Sunday’s ballot, in which HDZ ended up doing quite nicely for itself.

After several years of frequenting the Commission’s press room, I would be a rich man if I had earned a euro every time a spokesperson has batted off a question by insisting the EU executive ‘does not comment or involve itself in national affairs’.

On issues like rule of law in Hungary, the Catalan independence debate or the Brexit debacle, the Commission has hid behind its role as the guardian of the EU treaties. That was immensely irritating but fair enough.

But in the HDZ video, von der Leyen was billed as the Commission president and filmed from inside the Berlaymont HQ. Although her spokesperson later insisted it was meant as a personal endorsement from ‘Ursula the citizen’, this simply does not wash.

Despite my own UK-nurtured ideas that a civil service-type body should be a politically neutral organ of the state, the Commission has veered away from any notion that it is a technocratic instrument. This is the self-styled “geopolitical Commission”, remember.

The Spitzenkandidat system was designed to give more political clout – currently only provided by the Parliament’s vote of consent – to the Commission president, by giving the biggest group of MEPs first dibs over the top job.

Von der Leyen was, infamously, a cast member of the EU’s own Murder on the Orient Express last year, when the Spitzenkandidat scheme was killed by the Council and she was parachuted into the position.

As a result, she does not have the legitimacy to make this kind of party political intervention. Manfred Weber could have made a case for it, if he had secured the presidency but… well you know how that turned out.

As several EU wonks have pointed out, there is a case to be made that von der Leyen’s statement breached the Commission’s code of conduct. It has already been reported to the EU Ombudsman.

Von der Leyen’s spokesperson today acknowledged there were “mistakes” but stopped short of apologising or admitting that it had been a breach of protocol.

What kind of message does this involvement in Croatian politics send to aspiring EU candidates in the Western Balkans? It will only serve to reinforce the idea that enlargement is not a technical process but a political one, if such confirmation were actually needed.

As political scientist Jasmin Mujanović points out, leaders like Viktor Orbán and Serbia’s Aleksandar Vučić realised long ago that massaging their partisan links is the best way to placate Brussels when it comes to rule of law quibbles and corruption.

For countries that lack those cushy EU-ties, like Bosnia or Kosovo, both still in the gestation period of their respective ‘European paths’, this unpleasant episode might dissuade any appetite for reform.

Whether or not you agree that the head of the Commission should stay out of national politics is ultimately a moot point. Ursula von der Leyen is in the job at a time when global health and climate crises are doing unprecedented damage.

Simply put, she has more important things on her agenda than politicking in a low-stakes election in Croatia.

It is a big week for EU energy policy: check out the latest leak of the Commission’s plans for a ‘hydrogen alliance’ and its sector integration strategy, which prioritises energy efficiency.

MEPs on the environment committee are voting on measures that would finally steer the shipping sector into the EU’s carbon market, while their regional policy counterparts are deciding whether to include gas in the bloc’s proposed Just Transition Fund.

Germany’s government has criticised Turkey’s military forays in Syria, while Germany and France are doing their best to unjam deadlocked talks between Kosovo and Serbia.

The Commission’s upcoming digital services act is likely to include a crackdown on the illegal sale of counterfeit and illegal goods, Margrethe Vestager confirmed. Here is a deep dive into the future of STEM studies in Europe.

This week, be sure to keep an eye on our Special Reports on medicines for rare diseases, the farm to fork strategy and the latest developments from Kazakhstan.