The Brief, powered by EHFG – Focus on Plan A, keep Orbán for later 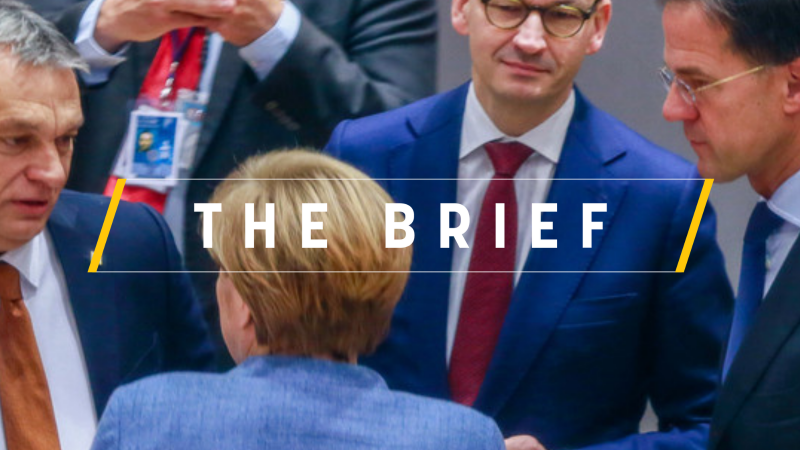 Europe’s focus is on Plan A: urgently reaching an agreement on the next EU budget, recovery fund and rule of law mechanism. There is also a Plan B, in case the Hungarian and Polish vetoes are not lifted. The thorny issue of Hungary’s Prime Minister Viktor Orbán will be assessed later.

These are the priorities, according to Siegfried Mureșan, a European People’s Party MEP.

The veto imposed by Hungary and Poland on Brussels’ oversight over the rule of law will top the EU summit agenda later today, overshadowing the main purpose of the meeting, which is supposed to be the handling of the COVID-19 pandemic.

The European Parliament and the Council have already agreed on the bloc’s long-term budget  and the rule of law, and are negotiating the recovery package.

Muresan told EURACTIV that the two countries are exercising their veto right to block one of the most important pieces of EU legislation in order to influence the outcome of a sectorial piece of legislation, which is the rule of law mechanism.

“It is not normal to mix these two. In any case, the two countries also greenlighted the July EU Council conclusions which provided that a regime of conditionality to protect the budget and Next Generation EU would be introduced,” Mureșan commented.

“Clearly, the preferred scenario is the Plan A, meaning an agreement on MFF, Recovery Fund and rule of law mechanism. We want EU unity and values altogether, we want the Recovery Fund there to be well spent, this is what Europe has committed to toward EU citizens and this is what they expect,” he added.

Considering that the pandemic crisis is far from over and the future is increasingly uncertain for the EU economy, blocking the recovery fund now would have major detrimental implications.

The governments in Poland and Hungary satisfy their domestic audience at the expense of Europe. Not only politically, but also on a public health level. Blackmail in times of an unprecedented public health crisis is something that cannot be forgotten easily.

But everyone should be prepared for a potential deadlock tonight, as Orbán is not an easy player although he is being marginalised even from his close Visegrad partners.

The question is whether EU leaders are ready for Plan B.

“The plan B is to use the budget from last year, which is still functional. However, this was adopted before the pandemic and does not address new priorities, such as boosting healthcare. In this case, we will need new tools. But again, this is not the preferred scenario,” Mureșan said.

In this scenario, EURACTIV understands, the money will be found one way or another, and the strategy will be re-oriented to address new healthcare priorities, while Poland and Hungary will temporarily escape when it comes to the rule of law.

The question is what happens next, politically. How long will the healthy part of the European People’s Party tolerate Orbán and other “little Orbáns” that appear from time to time?

“The current discussion does not make the EPP comfortable and we will have to assess the situation at a later stage. However, the only priority now is to definitely move on with Plan A because the more we debate, the more complicated things become,” Mureșan said.

There is little doubt that everybody’s hope is to have an agreement and simultaneously preserve EU values. But even in this scenario, no one should forget Orbán’s stance.

Row over rule of law is set to infect the EU virus summit on Thursday (19 November), as Hungary and Poland’s vetoes over the long-term budget and recovery fund will top the agenda, sidelining efforts to tackle the coronavirus epidemic.

Speaking about the rule of law spat, one Greek government official told EURACTIV the discussion is ‘bigger than the EPP’ and the vetoes are symptomatic of bigger problems in the EU.

Meanwhile, EU lawmakers struck a deal on the first fund to be financed from markets that will channel European money to prop up the bloc’s economy by supporting health services and small businesses.

Across, the Channel, UK Prime Minister Boris Johnson will announce on Thursday (18 November) the biggest increase in British defence spending since the end of the Cold War, EURACTIV has learned.

As the European Commission prepares to publish its offshore renewable energy strategy, France’s wind farm projects – delayed compared to its European neighbours – face opposition from fishermen already operating in difficult Brexit waters, EURACTIV France reports. EURACTIV Germany also looks into the country’s own plans, asking if they will be enough to drive the energy transition?

While speaking in the European Parliament, one senior EU official said the Commission will consider hydrogen produced from nuclear power as “low-carbon.”

In France, as a landmark experimentation recently authorised in France can foster patient access to medicinal cannabis in the country and become a role model for Europe.

Further east, EURACTIV looks into how young people in Belarus have become the drivers of the protests following rigged national elections and violence against peaceful demonstrators.

EURACTIV looks at abortion rights across the EU. Though Poland is on the verge of tightening laws further, a closer look at other European countries shows a trend that does not go towards liberalisation either.

EU auditors have questioned the effectiveness of antitrust fines dished out by the European Commission, as part of a landmark audit of the EU executive’s role as an enforcer of competition rules.

While football fans attach great importance to the environment, their behaviour is not always “climate-friendly,” a new study showed. EURACTIV France reports.

The European Commission’s threat to withdraw its legislative proposal for the post-2020 EU’s farming subsidies programme has irritated EU lawmakers. EURACTIV asked some legal experts to clear the air about the controversy.