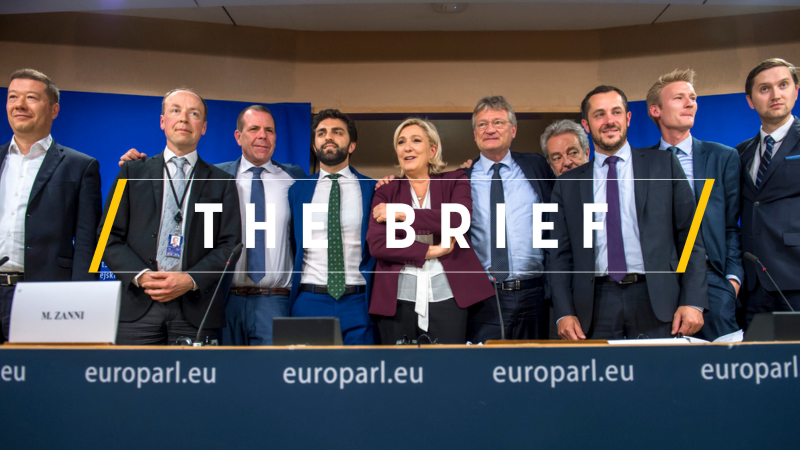 The unwritten rule of ‘cordon sanitaire‘ has struck again. Once more, the far-right was prevented from taking a key post in the European Parliament.

Although few see much of a problem in sidelining the parties that are admittedly anti-EU in the EU institutions, the way democratically elected political forces are being kept out of the democratic game is becoming grotesque.

For the uninitiated, the cordon sanitaire formula was borrowed from Belgian political jargon: between 1989 and 1992, far-right parties were deliberately excluded from any political negotiations to form a ruling coalition.

Top jobs in the European Parliament, such as presidencies of committees, are distributed through a combination of the general democratic principle that all political groups should be represented and the so-called d’Hondt system, which divvies up the available posts.

MEPs from the nationalist Identity and Democracy (ID) group were already barred from any key post in July 2019, but the problem has reoccurred recently while setting up three new special committees and a committee of inquiry.

This time, the ID group was expected to take the helm of the inquiry committee on the protection of animals during transport.

However, any candidate informally assigned to chair a committee using the d’Hondt method can be voted down by the same members. That’s the rub.

The far-right presented a candidate, Sylvia Limmer from Germany’s Alternative für Deutschland (AfD), but it was Green Luxembourgish MEP Tilly Metz who got the job in the end.

Just to be clear, Metz is the proverbial best person for the post, as animal welfare is one of her core topics.

But in democratically-elected institutions, representation takes precedence over competence.

ID is now the fourth-largest group in the Parliament, having overtaken the Greens when the UK left the bloc.

So the real question is rather: if far-right parties cannot even get to chair an inquiry committee on the transport of animals, what are they in Brussels for?

Bear in mind, as fully-fledged MEPs, they can still impact legislation by pushing amendments. They can also flag a political issue during a plenary debate. One could almost wonder whether it still makes sense to preclude them from joining in Parliament’s power-sharing?

And yet, the ‘cordon sanitaire’ is a deeply ingrained idea which thoroughly pervades the real essence of power-sharing in the Parliament. For most, it still represents a Rubicon that doesn’t have to be crossed.

Even the current President of the European Parliament, David Sassoli, supported the idea of a cordon sanitaire against nationalist parties when he was still only the head of the delegation of Italy’s centre-left party Partito Democratico (PD).

However, the cordon sanitaire can be overcome, when there is a political agreement.

It happened with Spanish MEP Mazaly Aguilar, who was elected as vice-president of the Parliament’s agriculture committee although her party, VOX, was perceived as worthy of cordon sanitaire.

The vote was taken by secret ballot, but at that time, some Parliament sources said the cordon sanitaire had failed because of an agreement with the liberals to elect their own candidate, Elsi Katainen, as fourth vice-president.

Old habits die hard, but when they no longer have a purpose they end up being set aside. Most likely, this will ultimately be the fate of cordon sanitaire.

The Roundup
Yes, indeed, the foreign policy European Council has been moved to next week. But that gives you more time to dive into our video explainer on how the EU’s sanction regime works and what the current challenges are.

At the next European summit, Austria wants to speak openly about sanctions against Ankara, including the possibility to break off accession talks with Turkey, the country’s EU Minister Karoline Edtstadler told EURACTIV Germany.

The European Commission proposed to member states to share responsibility for asylum seekers under a “mandatory solidarity” mechanism. With the new migration pact, it hopes to avert a replay of the 2015 migration crisis by giving the countries a choice between taking in migrants or helping to send them back home.

The collapse of trade talks this year will lead to “a period of profound antagonism” between the EU and UK, the director of the UK in a Changing Europe academic think tank, has warned.

A major challenge in the spread of renewable energies is their unpredictability: supply and demand do not always match in time. To compensate for this, researchers in Bielefeld are working on artificial intelligence that distributes electricity differently, depending on the weather.

One response to “The Brief, powered by ESA – The undemocratic habit of the democratic game”