The Brief, powered by GIE – The ghost of Napoleon 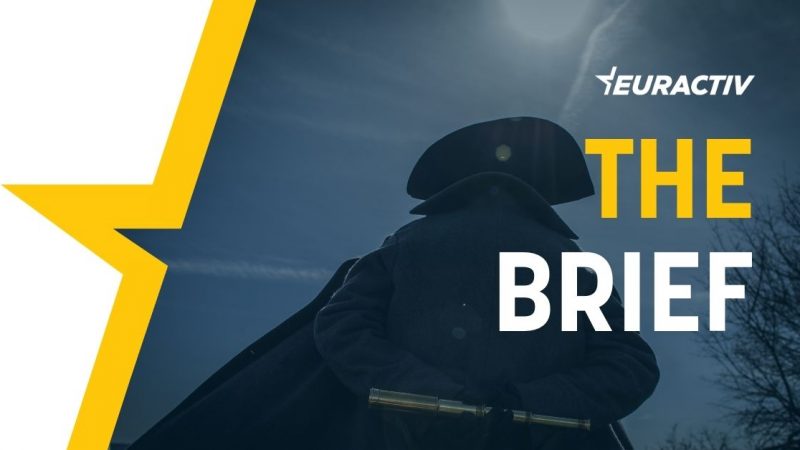 Wednesday (5 May) marks the 200th anniversary of Napoleon Bonaparte’s death. In his country, France, there is a big debate about whether this should be an occasion to honour him or not at all.

Maybe because the author of these lines is not French, only Francophile, it seems less risky to suggest that we should pay tribute to such an outstanding figure in the history of Europe – and of the world.

But don’t tell that to the French.

The debate in France takes place against the backdrop of the campaign for the 2022 presidential election, which has unofficially started.

For the electorate on the left, as well as for the Greens, and for all those who sympathise with the “Black Lives Matter” movement, Napoleon is the man who re-introduced slavery. (In 1794, during the French Revolution, France became the first country to abolish slavery but Napoleon restored it in 1802). Celebrating him is a no-go.

For a more conservative electorate, however, Napoleon is a great leader who has consolidated the Revolution with its modern and egalitarian principles, the author of the Civil Code, and the architect of modern urbanism that has shaped Paris more than any other period of history.

His military record is also controversial. Napoleon tried to build an empire and was successful for many years, but when he died, French-administered territory was smaller than it had been before he arrived on the mainland from his native Corsica.

Unsurprisingly, far-right leader Marine Le Pen, who commentators say has a good chance of winning next year’s presidential election, is also in favour of paying national tribute to Napoleon. President Emmanuel Macron, who is likely to face off against her at the second round, is keeping the commemoration to the strict minimum.

In an effort not to alienate the centrists, Macron decided to lay a wreath at the tomb of Napoleon, but he waited until the last minute to announce his plans for the tricky bicentenary.

The Napoleon controversy comes days ahead of Sunday’s launch of the Future of Europe Conference. This is important. If Europe wants to have a future, it should feel more at ease with its past.

Was Charlemagne an important figure in the history of Europe? Our guess is that the vast majority of readers would answer that question with a resounding yes. Is Napoleon a similarly important figure? Here, a clearer answer is needed, and hopefully not only from the French.

The entire world admires Europe’s history. Millions of tourists from around the world, Russian, Chinese, American, queue to get a glimpse of Napoleon’s tomb in the Invalides. Yes, Napoleon tried to conquer Russia, but Russians still have a soft spot for him.

Napoleon may be controversial, but he is also fascinating.

Europe will remain open to everyone but will no longer be naive in the face of the rapidly changing world and will seek to be in the driving seat, Commissioner Thierry Breton told EURACTIV and a group of media ahead of the presentation of the update of the EU’s industrial strategy on Wednesday.

Greek journalist Kostas Vaxevanis recently heard someone was trying to have him killed. Days later, another well-known investigative journalist was assassinated in a mafia-styled execution in Athens. EURACTIV spoke to Vaxevanis to find out if press freedom is in trouble in Greece.

The German government’s latest attempt to attract investment in onshore wind farms fell flat, according to the results of tenders for renewables published on Friday (30 April), marking another episode in a series of undersubscribed tenders for wind power.

The European Union unveiled on Wednesday (5 May) a plan to cut its dependency on Chinese and other foreign suppliers in six strategic areas like raw materials, pharmaceutical ingredients and semiconductors after the pandemic-induced economic slump.

The transition towards a net zero greenhouse gas economy puts the power sector in the spotlight. The clean energy transition should result in an energy system where primary energy supply would largely come from carbon-free sources.

Climate change is likely to be a key area to strengthen cooperation between the Republic of Korea and the EU in the coming years, the country’s ambassador to Brussels, Yoon Soon-gu, told EURACTIV in an interview about multilateralism, climate cooperation and the EU’s Indo-Pacific strategy.

Speaking of climate, don’t forget to check out our weekly Green Brief for all the news about energy and environment.

Facebook is in favour of more regulation but is concerned that platforms could be forced in “diametrically opposed directions” in terms of privacy and transparency requirements, Nick Clegg, the platform’s vice president for global affairs, has said.

With barely a year until what looks to be a tight election in Hungary, the government is shifting considerable amounts of public assets away from the state and into foundations. The goal could be to sustain Viktor Orbán’s “System of National Cooperation” (NER) should he lose the 2022 election.

Companies subsidised by foreign governments will have to win EU authorities’ green light to acquire European firms or to bid in public procurements, according to a European Commission proposal published on Wednesday

One response to “The Brief, powered by GIE – The ghost of Napoleon”