The Brief, powered by Goldman Sachs – The last waltz 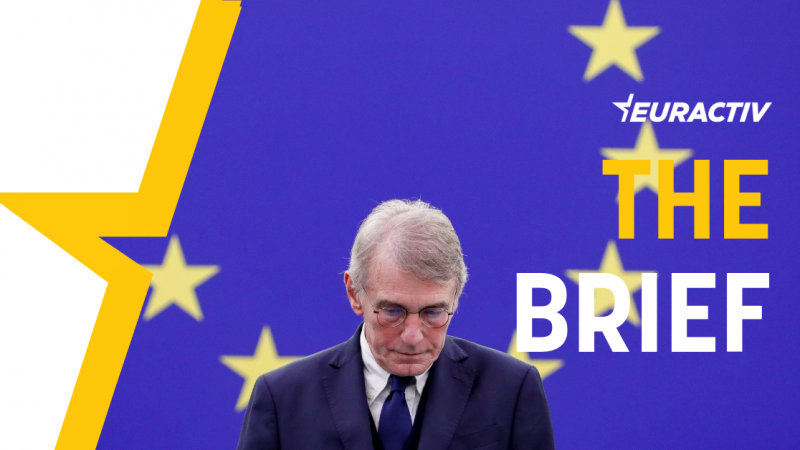 The ‘dance of the elephants’, as we recently described it, opens the way for EPP’s Roberta Metsola to become the European Parliament president for the second half of this term, before the 2024 European elections.

The incumbent David Sassoli (S&D) withdrew from the race because, in his words, he did not want to divide the pro-European forces in the European Parliament over his own fate. “I cannot allow this,” he tweeted.

The truth may be somewhat different though – if MEPs were faced with a vote to decide between Sassoli and Metsola, the EPP could have the upper hand. We imagine that if the numbers were more favourable to the S&D, dividing the pro-European forces would not be such an issue for them.

We will not discuss the qualifications or handicaps of Roberta Metsola. Generally speaking, it’s good that a woman from a small country gets such a top job. In Malta, holding the post should also boost her Nationalist Party ahead of the 2022 Maltese general elections.

We would instead argue that the distribution of top jobs in the EU is increasingly unfair and that the system of electing or selecting them is far from convincing. In particular, the practice of the Parliament’s leadership being split between two major groups should be abandoned. This one should be the last waltz!

With Metsola, the EPP will get one more top job at a time when its influence is shrinking. In the European Council, EU countries are represented by their prime ministers or presidents, according to their constitutions.

But the EPP share has never been so small in recent years: After recent national elections, only eight heads of state or government are presently EPP-affiliated, against seven from PES, the Party of European Socialists, and seven from the liberal Renew group.

(In addition, three heads of state or government are independent or non-affiliated, and one – Hungary’s Orbán – is in quarantine from the EPP, while Poland’s ruling party is ECR-affiliated.)

Opinion polls show that EPP would come second to PES if European elections were held today. Of course, many things can change between now and September 2024.

With Metsola at the helm of the Parliament, the EPP will be hugely over-represented at the top EU positions because Sassoli’s nomination was meant to balance the centre-right occupying too many posts.

The practise of splitting the five-year term between the EPP and S&D/PES is unfair to other groups, in particular ALDE/Renew.

Having said this, the high number of prime ministers affiliated to ALDE/Renew is not proportional to their overall European political weight, it is rather a consequence of centrists’ natural ability to play a balancing role in coalition governments.

But the bottom line is that, unlike most national leaders, EU leaders are appointed as a result of bargaining. Anti-Europeans use this to claim that the EU is undemocratic and essentially a bureaucratic construction. Sadly, this perception also applies to the European Parliament, where MEPs are elected and the president is appointed following a vote.

The Conference on the Future of Europe is the right place at the right time. Europe needs recognisable leaders. Metsola and Sassoli may be decent politicians, but frankly, who on earth will remember their names a few years later?

EU-27 leaders are locked in the last summit of the year, with the debates focusing on vaccination, energy, and Russia. Follow EURACTIV’s Liveblog for detailed guidance as to what is going on behind closed doors in Brussels.

As tensions between Ukraine and Russia are at their highest in years, EU leaders and their Eastern Partnership counterparts met on Wednesday (15 December) for a summit aimed to reaffirm the strategic importance of the region. The EU summit with its Eastern neighbours – Ukraine, Moldova, Georgia, Armenia and Azerbaijan – comes as the West is seeking options to deter what it says may be Russian preparations for a new attack on Ukrainian territory.

Despite progress, barriers remain to electric vehicle (EV) uptake in eastern and southern Europe. But the right EU policies can speed up the electric mobility shift across the continent, benefiting consumers and the environment, argue Monique Goyens and Julia Poliscanova.

In July, the European Commission unveiled a package of green laws to cut the EU’s carbon emissions by 55% by 2030. In this special report, EURACTIV looks at the impact the so-called “Fit for 55” package will have on the commercial road transport sector.

Estonia’s thriving wood pellet industry is pitting environmentalists who warn it increases logging and harms biodiversity against supporters who say it makes good use of wood that would otherwise go to waste. The subject is particularly sensitive in the tiny Baltic state once ruled by Moscow, whose forests cover more than half the surface area and are very much part of the national identity.

French President Emmanuel Macron declared his future “ambitions” for the country but declined to formally declare he was running for a second term in a lengthy prime-time TV interview on Wednesday (15 December) that saw him defend his record as an economic reformer.