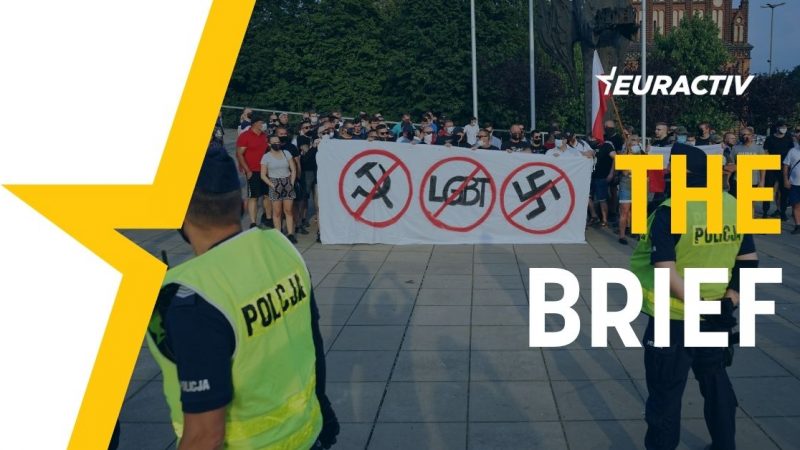 Who would have thought it? With such big issues like Russia and Turkey on the EU summit agenda, not to mention the COVID-19 travel certificate, without which our holidays will be spoiled, LGBTQI+ rights would eclipse both geopolitics and our sacrosanct lifestyle?

The issue has prompted quite a response, with 17 of the EU 27 (18 including Portugal, which maintained “favourable neutrality” as the country in charge of the EU presidency) signing a joint letter vowing to “continue fighting against discrimination towards the LGBTI community.”

The initiative took place after the Parliament in Budapest passed a bill that bans portrayals of homosexuality or of transgender people in content shown to minors.

But Europe is far from united in its approach to the issue: Bulgaria, Romania, Slovakia, the Czech Republic, Poland, Slovenia, Croatia, Lithuania, and, of course, Hungary, refused to sign the letter.

So what do we have, at the end of the day? A divided EU.

If there is a victor in all this, his name is Orbán. He was not isolated. He divided Europe.

After the catastrophe of the ratification of the 2011 Istanbul Convention on preventing and combating violence against women and domestic violence, it should be clear by now that gender issues are extremely divisive in EU countries and societies.

Critics say the Istanbul Convention is a plot to introduce “gender ideology” and promote LGBTQI+ rights in traditionally conservative societies. This is exactly the essence of the Hungarian legislation.

According to the Council of Europe website, Bulgaria, the Czech Republic, Hungary, Latvia, Lithuania, and Slovakia have not ratified the convention. The Bulgarian Constitutional Court ruled in 2018 that the Istanbul Convention was unconstitutional. Poland has ratified the Convention, but the conservative government has second thoughts.

So, what now? Was EU Commission President Ursula von der Leyen right to denounce the Hungarian legislation as a “shame” that discriminates against people on the basis of their sexual orientation, saying it goes against all the fundamental values of the European Union?

Our take is that yes, she was.

Now it is up to the Commission chief to start using the instruments she has at her disposal. Less clear, however, is whether Belgium was right to launch the initiative to gather signatures for its open letter. All it has achieved is more division.

The EU has institutions. The Commission is the guardian of the treaties and the European Court of Justice their interpreter. They should handle the issue, but it’s a responsibility the executive often skirts.

EU members are not the judge, jury, and executioner. If the summit that just started by the time this article was published gets bogged down into unproductive and divisive exchanges, it means that our EU leaders lack basic political culture, to start with.

This is a very sad conclusion, at a time when we are trying to imagine a brighter future for our Union.

European Union leaders will on Thursday consider whether to seek a summit with Russian President Vladimir Putin as part of a new strategy to manage relations with Moscow that the EU says are in a “negative spiral”.

Tensions are mounting in France over crossovers between the country’s €100-billion plan to recover from the economic fallout of the pandemic and the European Union’s cohesion policy, with regions complaining they have not been sufficiently consulted.

Controversy over a new Hungarian law banning LGBTQI+ references for minors is set to be raised by several EU leaders during their summit, originally intended to focus on foreign policy issues. But what is this law, and how does it fit into the Hungarian government’s anti-LGBT agenda?

Germany was lauded for supporting green spending criteria in the EU’s €750 billion pandemic recovery plan, but critics now say Berlin’s national recovery programme may look greener than it is.

The European Parliament gave the thumbs up on Thursday to the EU’s landmark climate law, despite opposition from the Greens, who said the legislation did not go far enough to protect people and the environment against dangerous climate change.

Last but not least, don’t forget to check out this week’s Yellow Room podcast (hint: AI and cannabis).