The Brief, powered by The Greens/EFA – Divorcing over Djokovic 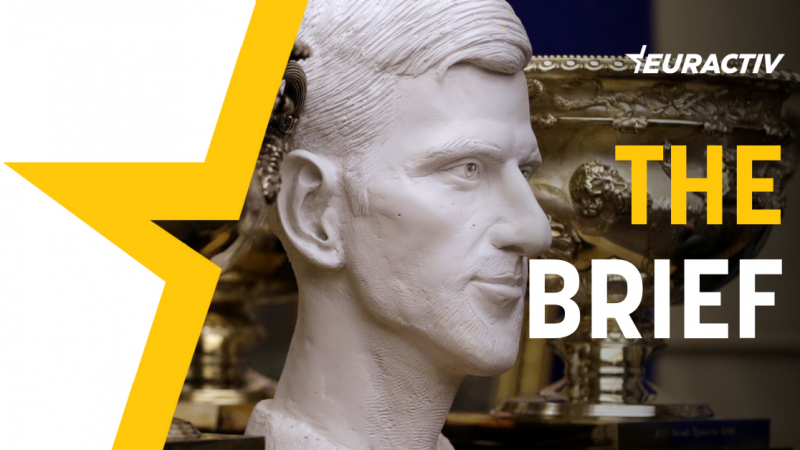 Novak Djokovic’s Australian saga is dangerously divisive. The Serbian tennis player is becoming, possibly against his will, an icon of the anti-vaxxers. The autocratic Serbian president Aleksandar Vučić used his case to denounce “how world order works”, to the delight of those who make a living by blaming the West for their countries’ own failures.

Is Djokovic dividing the world along the lines of the vaccinated and anti-vax? Or, worse still, is he being used to divide us geopolitically, as he represents the Orthodox world in the face of a Saxon-dominated West?

The author of the Brief personally knows a mixed European couple who fought over the unfolding Djokovic drama in recent days, to the brink of divorce, and back.

This is a real story. The Italian husband made sarcastic comments as they watched TV about “a Balkan brat who finally got what he deserved”.

The wife, a Bulgarian, got upset and shot back that the great tennis player was being unfairly portrayed by the Western media, the court, and Australia’s state authorities.

At a micro level, the couple discussed and eventually made peace. But at the macro level, the jury is still out, despite the final decision of the Australian court.

To begin with, the setting of the Djokovic case needs a more detailed explanation.

Australia has undergone some of the world’s toughest COVID-19 lockdowns and more than 90% of its adults are vaccinated. It has very low contamination rates and is one of the few places on Earth where the “zero COVID” policy is plausible.

When the news spread about Djokovic’s non-vaccinated status, 80% of Australian respondents said he should be deported.

Public opinion is important at a time when Prime Minister Scott Morrison is preparing for an election before May.

In hindsight, Djokovic and his team should have been much more careful. Australia is a dangerous place to tease the COVID restriction system.

However, Djokovic was allowed to enter Australia without vaccination, based on a medical exemption organised via Tennis Australia.

One could indeed argue whether this exception was fair (such exceptions are granted to people with serious diseases incompatible with vaccination, while Djokovic reportedly thought the jab could negatively impact his physical performance).

But the exemption was made, ultimately prompting widespread anger among most Australians (not the Serb community though).

Then Djokovic stayed for nine hours at the airport until his visa was cancelled, on the grounds that he was not eligible for a medical exemption, and was eventually taken to a specialised hotel – actually a detention centre.

From that moment on, the international press smelled blood and the issue suddenly garnered coverage not only by the sporting media but across the board.

A lot has been said since. Before touching down in Melbourne on 5 January, Djokovic was not an anti-vaxxer personality. He simply did not discuss his vaccination status.

It will be in no one’s interest (and certainly not in the interest of Djokovic and of the tennis game) to create dubious heroic narratives to make up for the lost chance to see a top tennis star playing in a top tournament.

We are aware that some have already discussed the possibility of Djokovic running for president of Serbia (but not before Vučić decides). Everything is possible in the future.

In a more immediate future, Djokovic has a choice to make. He will either get the jab and continue to play in top tournaments, or he can become a politician and ride the anti-vaxxer wave, at a particular time when science suggests that vaccination does not make it significantly less likely that you will contaminate others.

Our take is that by not being able to play – and possibly win the Australian Open – Djokovic was not a hero. He was a victim of circumstance, and to some extent, of his own failures.

But today, Djokovic is top world news, more than he would be had he gone on to win a record 21st Grand Slam title. Making history is not difficult for him but deciding about his future is more tricky.

A message by The Greens/EFA

Municipalities do the lion’s share when it comes to welcoming migrants and refugees. How can the EU budget support them? Join our panel discussion with HUMBOLDT- VIADRINA Governance Platform and Damian Boeselager MEP. Find Out More >>

The US government has held talks with several international energy companies on contingency plans for supplying natural gas to Europe if conflict between Russia and Ukraine disrupts Russian supplies, two US officials and two industry sources said. The United States is concerned Russia is preparing for the possibility of a new military assault on the country it invaded in 2014. Russia denies it plans to attack Ukraine.

Europe needs tougher rules and financial penalties to ensure each country cuts its greenhouse gas emissions if the EU wants to deliver the bloc’s climate targets, according to the European Parliament’s lead lawmaker on the policy.

Over a hundred alternative amendments were tabled on the DSA ahead of the plenary vote, with some critical comebacks and reformulations of existing proposals. The amendments are a mixed bag of new bids, bring-backs of measures discarded in the consumer protection committee (IMCO), and more moderate versions of proposals that have failed to secure a majority so far.

As some European countries start returning looted art to former colonies, experts call for EU guidelines to “harmonise” and support the restitution of cultural objects to African museums. The push for the return of art objects stolen during colonialism has become more widespread in recent years due to the renewed attention on Europe’s colonial past.

A star-studded informal group including some of the hottest movers and shakers in EU climate policy was quietly established in December at the initiative of an influential German think-tank. EURACTIV has the forum’s details whose aim is to bring the EU’s ‘Fit for 55’ package of climate legislation over the line.

Influenza has returned to Europe at a faster-than-expected rate this winter after almost disappearing last year, raising concerns about a prolonged “twindemic” with COVID-19 amid some doubts about the effectiveness of flu vaccines. According to EU figures, lockdowns, mask-wearing, and social distancing have become the norm in Europe during the COVID-19 pandemic knocked out flu last winter, temporarily eradicating a virus that globally kills about 650,000 a year.