The Brief – Staring at the other side of the Rubicon 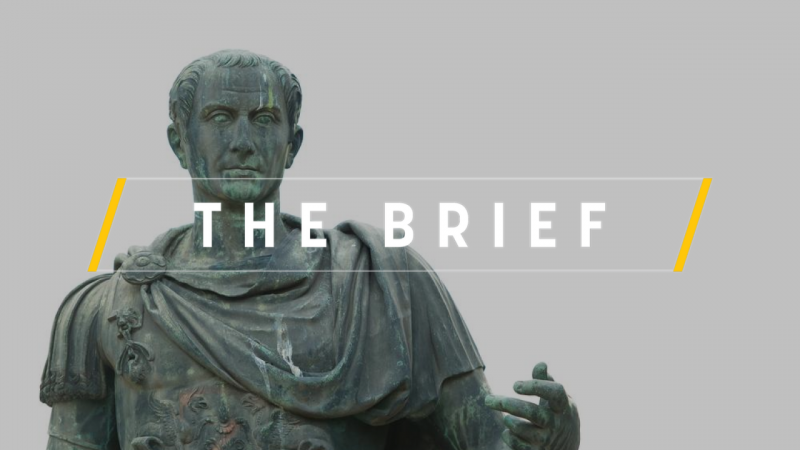 July’s EU budget and recovery fund deal was rightly hailed as a historic moment for the bloc, as member states agreed to mutualised debt for the first time. But have we truly crossed the Rubicon?

Critics of the budget pact lamented the fact that the favourable split between grants and repayable loans was watered down in the final text. The stingy Dutch had got their way and torpedoed the agreement, was the cry.

But the fact remains that mutualised debt with more than 50% in grants was quite unthinkable before the pandemic hit and, to many, even before the final Council session kicked off in late July.

So it is a ‘crossing the Rubicon’ moment in that if – or when – more substantial crises hit Europe, a precedent has been set and this will be the first solution that many will turn to.

When Julius Caesar forded the infamous river though, it set in motion a chain of arguably unavoidable milestones that would see him declared dictator of Rome and change the course of European history forever.

The EU’s Rubicon moment has sparked no such irreversible events, and it turns out that we are still up to our midriffs in river water, halfway between the two banks.

A combination of events elsewhere – Greece-Turkey tensions in the Mediterranean, the Lebanon disaster, one eye on the approaching US elections – and concerns about how actually to implement the recovery deal have waylaid us mid-stream.

Make no mistake, it is not too late to botch the date with destiny and bungle what should indeed be the formation of a new normal in EU decision-making.

National recovery plans are due soon and senior EU officials are already worried that governments will have drafted ‘shopping lists’ rather than map out sustainable steps towards economic resurgence.

Climate boss Frans Timmermans struck an apprehensive tone yesterday when he said that it will be up to the Commission to make sure all 27 plans are in step with each other and not contradictory.

“Tough discussions with national governments are the only way forward,” the Dutchman said. They are probably unavoidable, as the Council’s track record hardly suggests that the capitals will immediately turn in what is expected of them.

The Commission could also fluff its lines and sour future leaders on the idea of mutualised debt if it does not do its due diligence and borrow the €750 billion on the capital markets and manage the portfolio adequately.

Of course, the EU executive has seasoned officials at its budget directorate and the European Investment Bank to call upon but – triple-A rated or not – it has never borrowed such a large amount of money at such short notice before.

It is almost unthinkable that there will be no slip-ups of some kind at some stage. Managing them well will be half the battle.

Europe certainly fell short of its long-awaited ‘Hamilton moment’ and although it is has taken some sure-footed steps into the murky depths of the river of fate, the EU will have to steel itself, fix its gaze at a point on the distant horizon and walk with purpose towards the other bank.

The EU’s data watchdog has warned that body temperature checks aimed at curbing the spread of the virus could infringe on personal liberties. “Careful assessment is the way forward”, according to the agency.

European and Western targets were in the crosshairs of a fresh coordinated disinformation campaign, according to Facebook, which has removed malicious accounts after a tip-off. The German government said that novichok poison was found in the system of Russian opposition leader Alexei Navalny.

At a meeting of agriculture ministers, food labelling stole the spotlight from talks on reforming the EU’s main farming subsidies programme. Italy sided with the bloc’s farmers when it comes to colour-coded nutrition labels.

Food safety reemerged as a health concern as Brazil nuts contaminated with salmonella were detected in several EU countries.

Shipping has an emissions problem but one heavy-hitter wants to build a system that captures CO2 onboard so it can be unloaded when ships make port. But there are plenty of challenges standing in the idea’s way.

Liechtensteiners voted no in a referendum on expanding the microstate’s only rail link to accommodate international trains plying the Austria-Switzerland route. The cost of upgrading the line was deemed too much for the principality’s inhabitants.

The mystery about who will replace the now-departed Phil Hogan as EU trade chief continues. His successor, be they Irish or not, is likely to have a hand in the completion of the bloc’s trade and political negotiations on a post-Cotonou agreement.