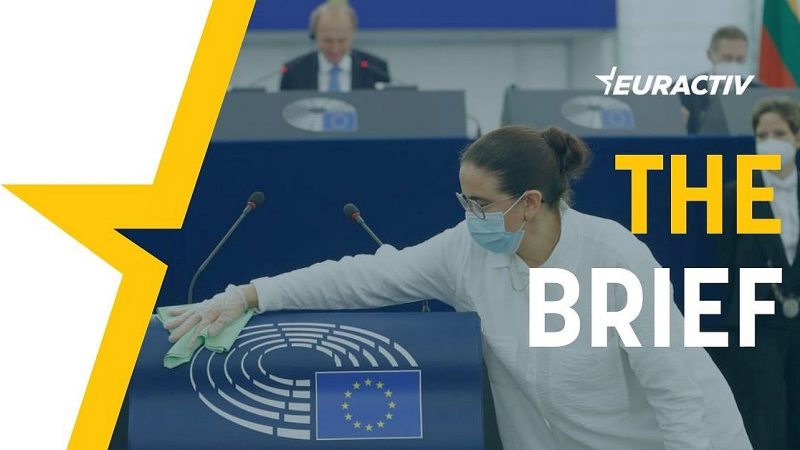 While Europe is vaccinating its teens without a moment’s thought of giving away doses to vulnerable people in poorer countries, EU parliamentarians got an offer they could not refuse in return for their comeback to Strasbourg.

“How good it is to be back in Strasbourg!” European Commission President Ursula von der Leyen tweeted – in French, évidemment – on the return of the EU caravan to the Strasbourg seat of the European Parliament.

Just a few of those present felt the same excitement, of course, as most of the people from the Brussel-resident EU bubble despise – and not even that covertly – the monthly journey to the Alsace region, and did so even before the pandemic.

COVID has only made things worse as current travel rules still require tests to cross borders, as well as a mandatory quarantine once back in Brussels for those who are not fully vaccinated.

Still, more than a half of the MEPs “are in Strasbourg for this much-awaited return”, a press release from the Parliament said. Other lawmakers opted to keep attending remotely.

Game theory, the theoretical framework conceived for understanding human interactions, teaches us that to convince people to do something apparently beyond all logic – like relocating thousands of people more than 400 kilometres in the midst of a pandemic – you need incentives.

This is a central concept of the tit-for-tat strategy used to solve intermediate game theory problems. The tit-for-tat consists of replicating the moves of the other player, a behaviour that should lead to reciprocal altruism or cooperation.

Since the usual incentive for attracting MEPs – the daily allowance for attending plenary, committee works and group works in presence – could not be enough this time, French authorities took a sneak peek at the Parliament’s agenda and saw it was dominated by COVID debates.

Then, they presented their mirror-like move: the possibility for lawmakers and their staff to get a coveted dose of the COVID vaccine.

This “offer”, as an internal memo reads, has been put forward “to accompany the return of the MEPs to the Parliament after 15 months of absence,” Frédéric Bierry, president of the Collectivité européenne d’Alsace (CeA), which hosts Strasbourg’s “vaccinodrome”, said in a tweet.

However, this trip-for-jab presents several ethical concerns, regardless of what you think of the long-standing Strasbourg seat debate.

It is not useful for job purposes – it doesn’t help Parliament’s workers in their travel and stay during this plenary session, as they would only be really immunised two weeks after getting the jab anyway.

French authorities defend themselves by saying that this is in conformity with the national vaccination campaign, which was opened to all age groups and all persons from 31 May.

Still, a check on its website suggests that the vaccine availability for ordinary people is much more limited – it is possible to book an appointment only for a Pfizer vaccine starting from 14 June – compared to the “offer” made to MEPs.

We will probably never know how many of Parliament’s people decided to take up the “offer” and it does not matter. It is just worth pointing out that this trip-for-jab scheme is only the latest of the many weird things done for the sake of keeping the Strasbourg seat.

In the midst of the pandemic, Parliament President David Sassoli had to come to Strasbourg and kick off December’s plenary in a completely empty hemicycle.

If that was not quixotic enough, how about the Conference on the Future of Europe, which also had to be in Strasbourg to please the French and offset the Parliament’s months-long absence from the city.

The Strasbourg seat has become an issue that will never be solved, a pure EU bubble debate, an example of an anomaly that cannot change and will not be changed, much like making decisions by unanimity in the European Council or the secretive comitology process in the Commission’s decision-making.

An analysis of 12 recovery plans submitted by European Union member states seen by EURACTIV ahead of publication indicates that the investment proposed will see the bloc falling radically short of the digital targets it has set itself for the end of the decade.

The EU’s carbon border adjustment mechanism proposal, expected to be tabled on 14 July, will form a central part of its push for a green industrial policy aiming for net-zero emissions by 2050. Read more in today’s Green Brief.

The EU said on Wednesday (9 June) that Ukraine’s former president Viktor Yanukovych and his son remain subject to asset freezes despite a court annulling an earlier decision to renew the sanctions.

The potential of innovative feed solutions for boosting gut microbiome health of animals remains underexplored, despite mounting scientific evidence indicating that it underpins both animal health and welfare, stakeholders have highlighted.

The European Parliament voted in favour of the EU digital COVID certificate on Tuesday, bringing the EU one step closer to finalising the initiative due to come into force on 1 July and facilitate travel across the bloc.

EU lawmakers approved a report on the EU’s 2030 Biodiversity Strategy on Tuesday night, calling for legally binding measures to protect nature and biodiversity. A heated debate was sparked by amendments calling for forest protection to be weakened, which were eventually rejected.