The Brief – The sex of the angels 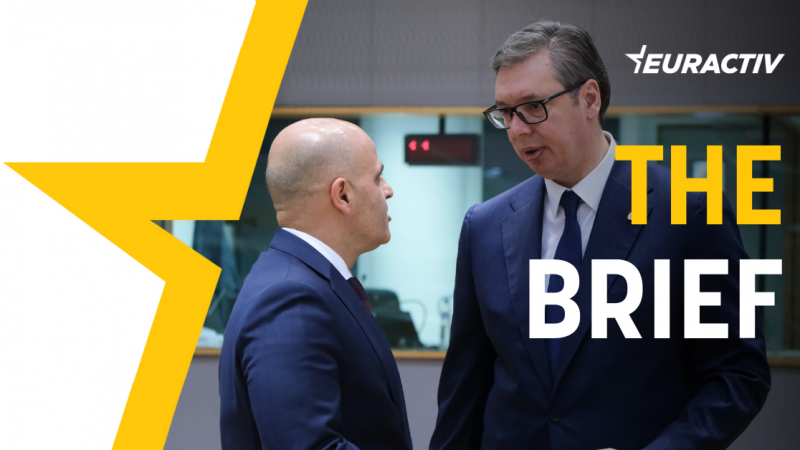 My journalistic impression from the first day of the EU summit today is that EU leaders discussed “the sex of the angels” and not the real problems of our union.

First, Serbian President Aleksandar Vučić got what he wanted. Instead of EU leaders pressing Serbia to align with EU policy on sanctions against Russia, which Serbia doesn’t comply with, the discussion was diverted to the Bulgarian veto against the start of North Macedonia’s accession negotiations.

When Vučić threatened to boycott the Western Balkans summit (getting support from Albania’s Edi Rama and North Macedonia’s Dimitar Kovačevski) this was precisely a fudge so he could avoid facing criticism.

Of course, in the end, Serbia, Albania, and North Macedonia didn’t boycott the summit. But Vučić, who should have been at the centre of criticism, deflected EU fire in a brilliant manner.

Discussing the Bulgarian veto a few hours after the Bulgarian government of reformist Kiril Petkov had been toppled by a political mafia congregation is a sort of perversity.

Because the mafia in Bulgaria controls a number of political parties, and right now, those parties have the majority in parliament. Petkov attacked the mafia, exposing a series of scandals, and their political puppets quickly voted him out of office.

Petkov was also doing his best to solve the veto problem created by his predecessor Boyko Borissov.

In an unbelievable turn of events in Brussels, the European People’s Party, Borissov’s political family, gave him a standing ovation for being “constructive” in solving the veto.

There should be a limit on how stupid EU bureaucrats can be.

Because it is Borissov who created this problem with the Bulgarian veto in the first place. With his coalition government, joined by the worst kind of nationalists, he engineered a monstrosity which did not exist before.

In an ever-more conservative Bulgarian society, the nationalistic rhetoric became mainstream, and the veto got 100% approval across party lines, a consensus unseen on any other issue in modern Bulgaria.

It is true that in North Macedonia, there is some anti-Bulgarian rhetoric and even perhaps hate speech. This is an inheritance from Tito’s Yugoslavia, and it’s Bulgaria’s fault for not addressing it before in the 1990s. It would have been solved by now. Bilateral issues should not be part of EU accession negotiations.

After two years of doing nothing, the EU came up with a (good) French proposal (under the French presidency of the Council of the EU), which names the problems and finds a timeframe for their solution, linking it with the EU negotiations as they will go by.

Bulgaria’s outgoing government seems to be comfortable with this solution, and so is President Rumen Radev, although he likes to speak a sterner language.

So the Bulgarian veto will be lifted, as far as Sofia is concerned, and it’s not an issue for the summit anyway because it will not be solved today or tomorrow.

But the veto will stay if North Macedonia says no to the French proposal.

Our educated guess is that this is precisely what is happening now.

At the Western Balkans summit doorsteps, Vučić hinted that if the North Macedonia veto is not lifted, Serbia, a brotherly nation, will continue its path with Skopje in the framework of the EU or outside of it.

This is an obvious allusion to Open Balkans, an initiative which makes some in the EU nervous and possibly gives ideas to Putin.

Perhaps the EU will try to pressure Skopje into accepting the compromise proposal, but even Petkov himself warned that some of the elements of the French proposal are very difficult to be accepted by Skopje.

No EU diplomat with whom this writer of the Brief spoke appeared to grasp this particular issue.

*The meaning of discussing “the sex of the angels” is “discussing futile or unimportant matters”.

EU leaders are expected to grant candidate status to Ukraine and Moldova at the European Council summit from 23 to 24 June. Watch EURACTIV’s live coverage here.

After the French EU Council presidency proposed to lift the Bulgarian veto and allow North Macedonia to start EU accession talks, three coalition parties in the Bulgarian parliament threatened to leave the governing coalition if the proposal’s approved by the country’s cabinet.

In accordance with the EU’s security of supply regulation, the German government has escalated its warning to the “alert level” following reduced gas flows from Russia.

According to the EU Commission on Wednesday (22 June), sustainability concerns should receive increased attention in trade deals and, if necessary, be enforced through sanctions.

To combat increasing cybersecurity threats, US Secretary of Homeland Security Alejandro Mayorkas welcomed on Wednesday (22 June) cooperation with France and the EU.

On the latest episode of Beyond The Byline, EURACTIV discusses Ukraine and Moldova’s potential accession to EU candidates and why airport strikes are happening all over Europe.

The Italian privacy watchdog joined its peers from Austria and France in banning Google’s service for unlawfully transferring data to the United States.