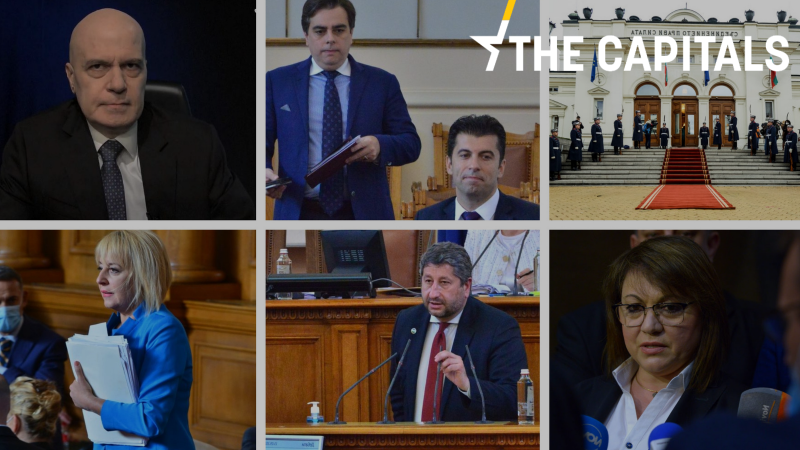 Bulgaria has been in a severe political crisis over the past year. The parliament has been fragmented, and scandals between major political players have made the situation even more complex. [EURACTIV Bulgaria/Dnevnik]

Bulgaria has been in a severe political crisis over the past year. The parliament has been fragmented, and scandals between major political players have made the situation even more complex. For the first time, Bulgarians have to vote three times in parliamentary elections in one year. On 14 November, there will be unprecedented 2-in-1 elections for parliament and president.

The latest “Gallup International Balkan“ poll shows that former Prime Minister Boyko Borissov’s GERB-SDS coalition is a clear winner. The political formation is supported by 22.5% of Bulgarians, and this support will likely increase as election day approaches.

However, Borissov is in political isolation due to corruption allegations that followed his ten-year rule. The fight for second place in the election is fierce and political experts say the parties that rank after GERB have the best chance of forming a ruling coalition.

The most probable ruling coalition in Bulgaria after 14 November will be between the so-called parties of change – “There is such a people”, “Democratic Bulgaria” and “Change continues” plus the Bulgarian Socialist Party (BSP). They all declare the destruction of the “Borisov” model to be their primary goal.

This possible coalition resembles the Balkan version of the “traffic light” coalition in Germany and would be the first in recent Bulgarian political history.

The “Democratic Bulgaria“ coalition is composed of a liberal, right-wing and green party. “Change continues” has a liberal profile, and the BSP is part of the Party of European Socialists. “There is such a people” is right-wing but has not declared affiliation with the European right.

Until now, there has been no quadruple ruling coalition in Bulgarian politics that could expand if the center-left anti-corruption coalition “Stand Up BG! We are coming” enters the parliament.

The parties that bring change

The Bulgarian Socialist Party is currently second with 15.1% support. The new political project of the former caretaker ministers Kiril Petkov and Asen Vassilev “Change continues” is a third force with 13.4%. Petkov and Vassilev are known in Bulgarian society as “Harvard graduates“. They have won sympathy with their anti-corruption rhetoric and reform proposals with a clear center-left flair.

So far, the fourth political force is the party of showman Slavi Trifonov – “There is such a people” (ITN). It has 12.2% support. Trifonov’s party won the last elections but disappointed many of its fans with its inability to form a functioning government. Leading ITN lawmakers have been embroiled in many personal scandals with partners from other parties that have created a toxic political atmosphere in the previous parliament. The loss of ITN support since the last election has doubled. Sociologists point out that many of these votes already support “Harvard graduates”.

The other significant player in Bulgarian politics is the anti-corruption reformist coalition Democratic Bulgaria, which has 11.2%. The last sure participant in the next parliament is the party of the Turkish minority “Movement for rights and freedom” – DPS (part of “Renew Europe” group), which has 10.8%. Like Borissov, the DPS is also in political isolation.

The party nominated businessman Delyan Peevski as a PM, who the US sanctioned under the Global Magnitsky Act. Washington calls Peevski an ‘oligarch’ for whom there are serious suspicions of corruption.

Very important for the balance of power in the next parliament will be the battle of “Stand up BG! We are coming! ”and the far-right nationalists with a pro-Russian profile – “Vazrazhdane” (Revival). The fourth wave of the pandemic and the imposition of restrictive measures gave nationalists a chance to enter parliament because they spoke out against vaccination, green certificates and questioned the scientific data on Covid-19.

Their behaviour in the National Assembly would be anti-systemic, which reduces the opportunities for the formation of a stable government.

The Bulgarian political “traffic light” will not be a classic coalition, but an expert political formula, which will most likely be backed by the “parties of change” and the BSP. This could lead to a program expert government, political scientist Parvan Simeonov (Gallup) told EURACTIV.

According to him, this government can reach a consensus on three issues – judicial reform, more social policies and a total revision of GERB’s policies. Parvan Simeonov expects some green policies to protect forests and coastal areas, but there will be no serious efforts to abandon coal. The future government will likely support the construction of more nuclear facilities.

“The curious thing in Bulgaria is that the former communists are among the parties of change. The BSP is one of the most conservative forces in Bulgarian society and it is a real irony to gather it in the government with the technocrats from “Change continues” and “Democratic Bulgaria”, the political scientist commented.

“Such a political coalition will be united mainly by the common enemy Boyko Borissov, which makes it look more like a military alliance between the US, USSR and Britain against Germany during World War II than the ruling government in Germany now”, Parvanov said.