Abortion due to foetal defects unconstitutional in Poland 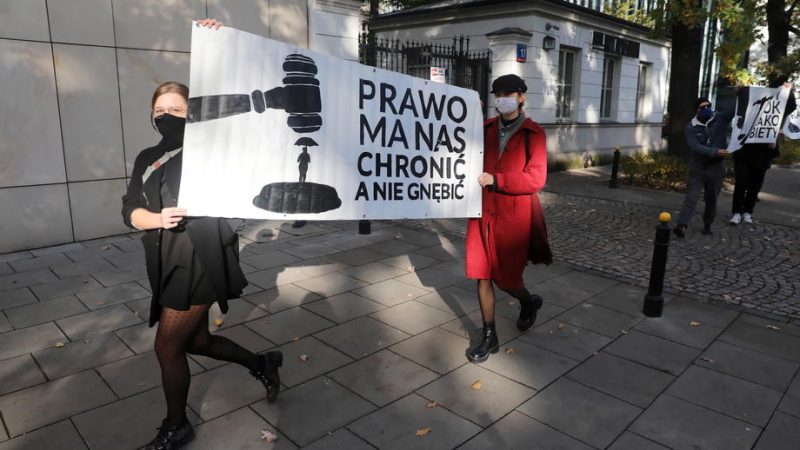 The protest of the participants of the 'National Women's Strike', standing in front of the Constitutional Tribunal building in Warsaw, Poland, 22 October 2020. [EPA-EFE/TOMASZ GZELL]

A ruling by Poland’s Constitutional Tribunal on Thursday has rendered existing laws that allow abortions due to foteal defects unconstitutional, making abortion almost illegal in Poland.

Once the ruling enters into force, ending a pregnancy in the largely Catholic country will be permissible only in cases of incest, rape or a threat to the mother’s health, which make up only about 2% of legal terminations conducted in recent years.

A group of MPs from the ruling Law and Justice (PiS) party and other right-wing parties had taken the case to the tribunal, claiming that existing legislation infringed the constitutional principles of human dignity and protection of human life.

The development pushes Poland further away from the European mainstream, as the only EU country apart from Malta, which prohibits the practice entirely, to severely restrict access to abortion.

The country of 38 million people sees fewer than 2,000 legal abortions a year, but women’s groups estimate that up to 200,000 procedures are performed illegally or abroad.

Protesters gathered in front of the courthouse. One was organised by so-called “anti-choice” groups, while the other was led by people who oppose the ban and took their protest in front of the seat of the ruling party, around 10pm on Thursday.

Warsaw Police said on Twitter that it reacted with pepper spray and physical force after protesters threw stones and tried to push through the police line.

PiS-allied President Andrzej Duda has said that if approved by the parliament, he would sign the draft legislation into law. The Catholic church and lay Catholic groups pressured the governing party to impose a stricter law.

As the ruling would create a new legal situation in Poland, “it means that the state must provide adequate care for mothers and children who will be born in connection with this ruling,” PiS spokeswoman Teresa Czerwińska said, which she added would include quick changes in the care system for disabled children.

Curbing access to abortion has been a long-standing ambition of the party, but it has stepped back from previous legislative proposals amid a widespread public backlash.

“Villains, from now Polish women live in hell, without access to the prenatal test, they have been sentenced to torture, suffering and pain,” opposition MP Barbara Nowacka commented on the ruling on Twitter:

“Once again, the government has failed Polish women and Poles. He showed that fanaticism is more important than the health and happiness of people,” commented opposition MEP Robert Biedroń.

The verdict, which is final and cannot be appealed, drew immediate condemnation from the Council of Europe, whose Commissioner for Human Rights Dunja Mijatovic called it a “sad day for women’s rights”.

“Today’s ruling… means underground/abroad abortions for those who can afford & even greater ordeal for all others,” she added.

“To throw in the subject of abortion and produce a ruling by a pseudo-tribunal in the middle of a raging pandemic is more than cynicism. It is political wickedness,” said Donald Tusk, head of the main centre-right EPP group in the European Parliament and a former prime minister of Poland.

“This decision will only further strip Polish women of their rights and endanger their health, mostly affecting the lives of low-income women,” Spurek said. “The European Commission and Council must act on the rule of law in Poland to protect the rights of women and all citizens from the whims of the Law and Justice government.”

Amnesty International, the Center for Reproductive Rights and Human Rights Watch also denounced the verdict in a joint statement, saying it “will further harm women and girls.”

One response to “Abortion due to foetal defects unconstitutional in Poland”