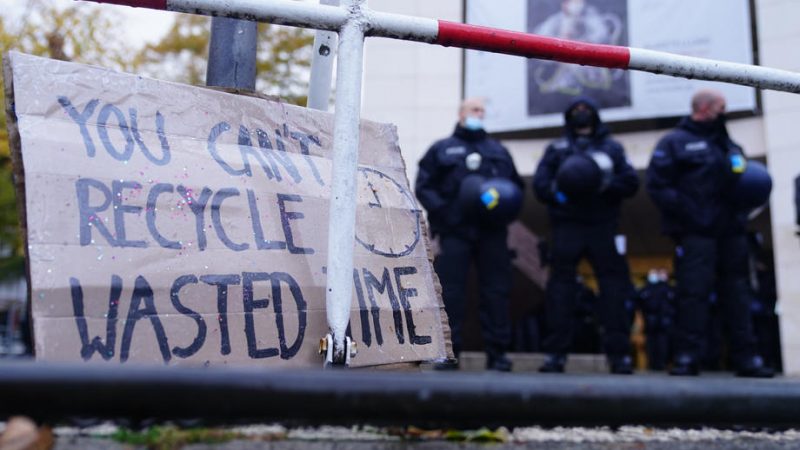 A cardboard reading '?you cannot recycle wasted time' leans on a barrier in front of policemen during a blocking action in front of the Social Democrats (SPD) headquarters during the 9th global climate strike of Fridays for Future in Berlin, Germany, 22 October 2021. [EPA-EFE/CLEMENS BILAN]

Climate activists blocked several streets in the German capital during rush hour to demand more sustainable agriculture and reduced food waste. Many of the protesters were arrested by the police.

The activists called on the German government to immediately table a draft “food rescue law”. According to them, this should oblige big supermarket chains to “make available food that is still edible” to fight food waste.

During the lead-up to last year’s federal elections, the movement behind the protest campaign organised hunger strikes to pressure would-be chancellor Olaf Scholz to acknowledge their climate policy demands publicly.

Police arrested 24 of the protesters while clearing the streets. Although the activists denounced the officers’ actions as “unexpectedly harsh”, a police spokesperson said that they had been left with “no other choice”.

“When people will not let officers carry them away, they can only apply direct force”, they told Berlin daily Der Tagesspiegel.

The movement has announced protests will continue to be held in the coming days despite the arrests, saying they will block “major highways”.

“This only shows that we are being disruptive at the right places”, one of the arrested protesters has said. (Julia Dahm I EURACTIV.de)