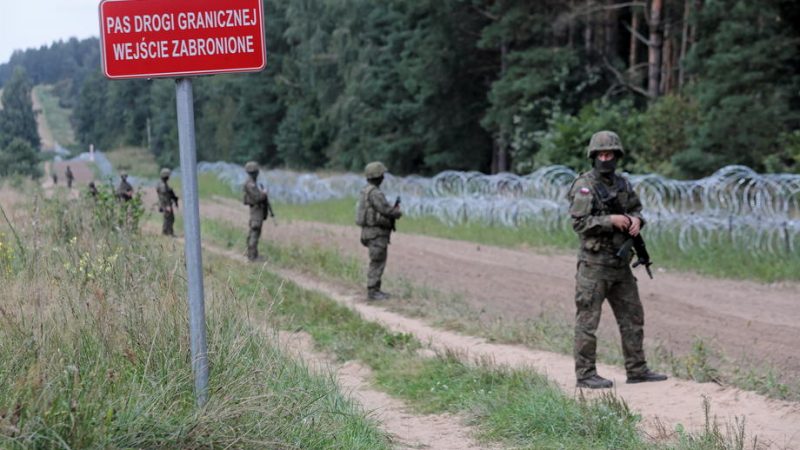 The construction of a fence on the border is expected to take up to 12 weeks. [EPA-EFE/ARTUR RESZKO]

Police and border guards detained 13 people – 12 Polish citizens and one Dutch – at the Polish-Belarusian border in Usnarz Górny, who attempted to destroy a barbed wire fence being constructed as part of the government’s response to the ongoing migration situation.

The activists would have to face the criminal consequences of their actions, said Interior and Administration Minister Mariusz Kamiński, adding that similar actions will face the same response.

At the Polish-Belarusian border, in Usnarz Górny, 32 Afghan migrants have been camping for nearly three weeks in the hope of being allowed into Poland, the Rescue Foundation (Fundacja Ocalenie) has found. Border guards and soldiers are currently securing the border.

“Poland was one of the countries participating in military operations alongside the US, under the aegis of NATO. For the situation of Afghans – left to the mercy of Islamic fundamentalists – we are today also partly responsible. However, we have a special responsibility towards refugees arriving in our country,” the activists wrote in a statement.

The construction of a fence on the border was announced by Defence Minister Mariusz Blaszczak last Monday. Work on the fence is expected to take up to 12 weeks.

The European Court of Human Rights issued interim measures on Wednesday, ordering Poland and Latvia to provide water, food, clothing, medical care, and, if possible, temporary shelter to refugees stranded at the border with Belarus.

However, according to the latest survey conducted by IBRiS for Polsat TV, most Poles (54%) are against accepting immigrants and refugees, with more than 21% of the respondents believing they should definitely not be allowed to enter the country.

Yet, 33% of those surveyed said they believed the government should not take such a step, while 38% said they were in favour of opening Polish borders to immigrants and refugees.

According to Justice Minister Zbigniew Ziobro, the situation related to migrants on the Polish-Belarusian border is not a spontaneous phenomenon, but an organised action of aggression against Poland.

“If Poland accepts the first group of people, another thousand will appear there in a moment. This is the way to make Poland a country overrun by refugees,” Ziobro said in an interview with Polish Radio. (Mateusz Kucharczyk | EURACTIV.pl)