Activists protest against LNG terminal on Danube in Bratislava 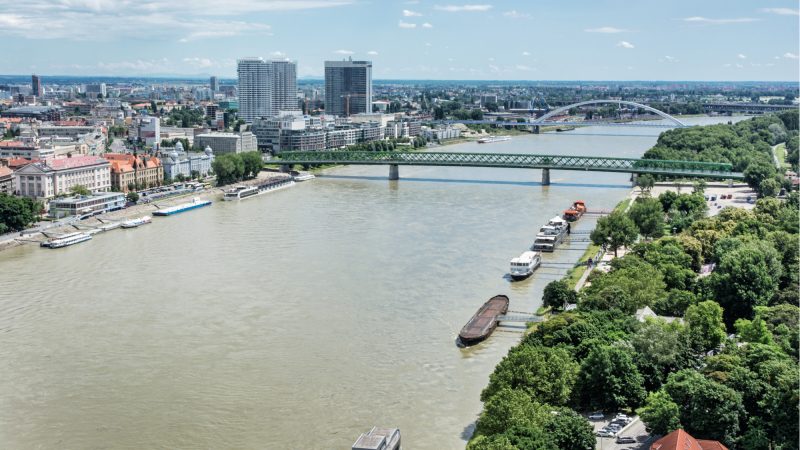 The main reason for its construction is the redirection of part of the shipping traffic to Bratislava, which is expected to reduce the number of trucks on the roads. [Shutterstock/PeterVrabel]

More than 60 Greenpeace activists protested on kayaks on the Danube river on Wednesday against the construction of a new liquefied natural gas (LNG) terminal in Bratislava.

The intention to build a terminal on the largest Slovak river was announced by the State Joint Stock Company Public Ports. The main reason for its construction is the redirection of part of the shipping traffic to Bratislava, which is expected to reduce the number of trucks on the roads.

According to the company, gas should replace oil as a fuel for ships which will strengthen the development of greening shipping by reducing emissions.

However, activists deem the company’s arguments misleading. According to them, the terminal is undermining climate goals, as it will ensure the use of gas for several decades to come. They argue that if the entire life cycle of liquefied petroleum gas is taken into account, the number of emissions will not be reduced compared to conventional fuels, but may even increase.

“Using public funds for fossil gas infrastructure is inadmissible. Gas is one of the causes of the climate crisis and not its solution,” said Katarína Juríková, director of Greenpeace Slovakia.

However, the country’s environment ministry is backing the investment in the terminal, arguing it will help the transition to a low-carbon economy. “It’s a fossil fuel that should be phased out, but we’re aware that such a change won’t happen overnight,” the ministry said.