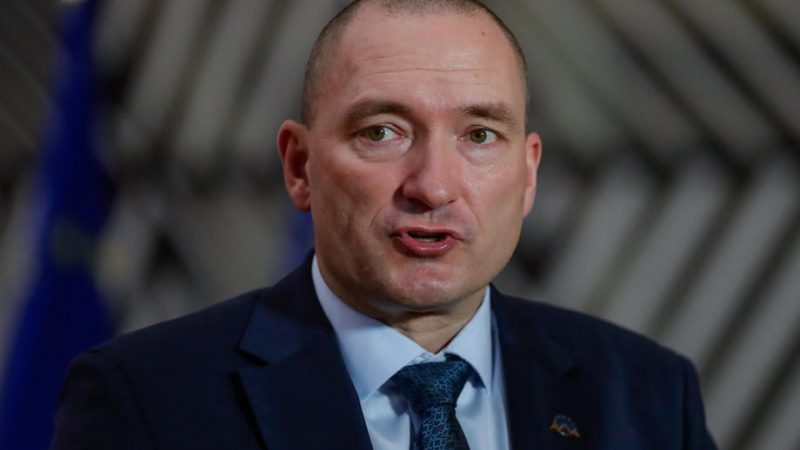 His decision to resign was announced Wednesday (20 April) after investigative portal Necenzurirano reported that Podgoršek and his wife stayed at a hotel owned by crypto millionaire Damian Merlak in January but did not pay the €800 bill. [EPA-EFE/STEPHANIE LECOCQ]

Slovenian agriculture minister Jože Podgoršek resigned just four days before the general election after he became the target of media scrutiny over a bill for a weekend stay in an upmarket hotel.

His decision to resign was announced Wednesday (20 April) after investigative portal Necenzurirano reported that Podgoršek and his wife stayed at a hotel owned by crypto millionaire Damian Merlak in January but did not pay the €800 bill. He only paid after he was asked to comment on the situation this month.

After the report was published, Podgoršek said he had asked the hotel to mail the bill because he and his wife were in a hurry but did not receive the bill and did not realise that until Necenzurirano contacted him.

The portal suggested that the bill payment may have to do with KŽK, a company that owns vast tracts of farmland and has been in dispute with the national Farmland Fund, which manages state-owned farmland.

It was implied that KŽK, until 2019, owned by Merlak, may have been returning a favour in exchange for the minister’s help with the dispute.

The company seemed to confirm this when it said it had paid Podgoršek’s bill because it was “in a totally subordinated relationship towards the minister,” but claimed it “neither demanded nor received any favours or privileges.”

The minister, meanwhile, claims he was framed because he did not succumb to pressure and was “very disruptive for some people”.

Matej Tonin, the president of Podgoršek’s party, New Slovenia, is convinced that the story came to light because KŽK wanted to force Podgoršek to act in line with its interests.

Despite the resignation, Podgoršek remains on the New Slovenia ticket for the general election since it is not possible to change candidates this late in the campaign.

Given the party currently polling between 7-8%, Podgoršek stands a good chance of being elected.